This morning's new home sales report was the kind of stunning reversal which shows why I do not follow it nearly as closely as the much less volatile single family permits.

Today's number of 631 thousand was a nine-month low. Further, May's original figure of 689 thousand units was revised down by almost -4% to 666 thousand. Last November, at 712 thousand, now stands out as the high water mark. The first two quarters of this year were flat, and were below both the 4th quarter of last year, and the high point of the three month rolling average is last November through this January. Finally, the number of houses *for sale,* i.e., inventory, rose slightly to a new expansion high.

Since FRED hasn't updated its numbers yet, here is the graph from the Census Bureau: 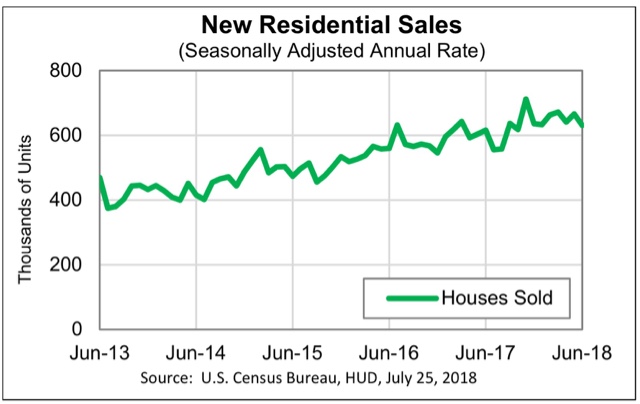 For good measure, the other most positive measure of the housing market, purchase mortgage applications, declined slightly again this week.  Here's a graph of this (from Yardeni.com) over the past few years: 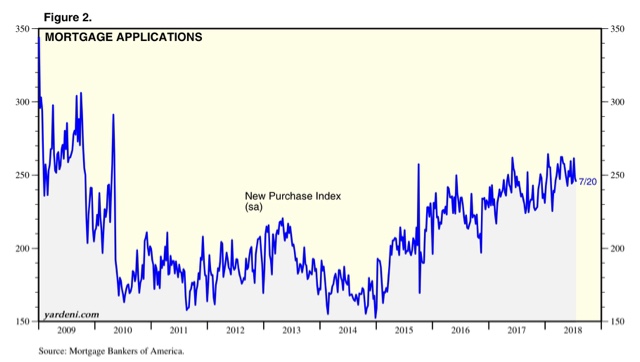 Note that purchase mortgage applications also look like they are at least flattening, if not rolling over.  The 4 week YoY comparison has declined from +7% a year ago, to +4% early this year, down to +2% now.

Although I obviously can't say for sure, most likely Friday's GDP report, which will include quarterly private residential construction, will probably also reflect his trend.

I'll update then, but this morning's report is close to a blockbuster, because it confirms the message of other, less volatile measures: the housing market has gone sideways this year.
Posted by New Deal democrat at 9:40:00 AM