The percentage of employees who don't get wage raises; is the Taboo undergoing an "extinction burst"?

I came across the below graph yesterday from the Kansas City Fed. It's pretty shocking: 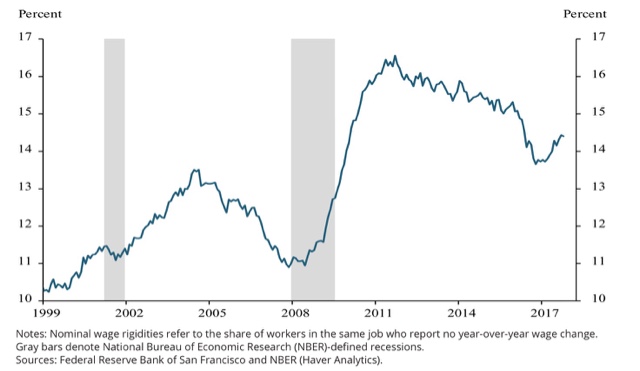 It represents "wage rigidity." In english, that means the percentage of employees who don't get any annual wage increases.

And it isn't simply slack in the labor force.  Here's the employment-population ratio for prime age workers:

This is the Taboo against raising wages in action. This is, in psychological terms, a learned behavior.

Even after the advent of "behavioral economics," the failure of economists to employ explanations of macro level behavior based on the concepts of learning and unlearning remains one of economics' glaring blind spots.

To refresh, a behavior that is rewarded will be learned over time, and repeated over and over thereafter, even if the rewards become sporadic. And it will even continue for awhile after the rewards are no longer there at all. Not infrequently, before the behavior is given up on, there will be an "extinction burst."

What is an "extinction burst"? It is the type of wailing, frustrated, foot-stomping, angry outburst that is characteristic of toddler temper tantrums.  If you ever watched the show "Supernanny," you've seen it: 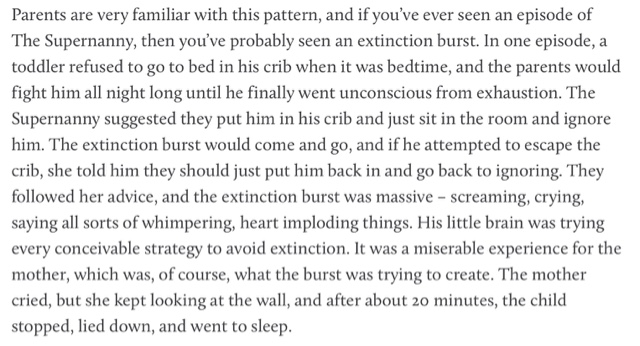 The caterwauling of employers that they simply can't find qualified candidates (unspoken: for the wages they want to pay them) has all of the earmarks of just such a temper tantrum.

For all but a few years in the last 15, many employers became accustomed to having multiple applicants for any job they offered, who had already learned the skills (and presumably been "downsized" or laid off by a previous employer). To put it simply: this was Marx's "reserve army of the unemployed." Employers were rewarded even if they did not offer any raises. They became accustomed to the success of this practice. In other words, they *learned* the behavior.

Now the behavior is no longer being rewarded. At the wages previously offered, candidates already skilled at the position are no longer available or applying. Instead, the "quits" rate of employees leaving their jobs for other, better-paying jobs, is near an all-time high.

So what does psychology tell us to expect? An extinction burst.

And that may be just what we are seeing in the soaring number of "job openings" compared with actual hires. Employers who don't want to raise wages are furiously repeating their learned behavior, trying one last time to make it work.
Posted by New Deal democrat at 8:20:00 AM