This morning April housing permits and starts, as well as industrial production, were released.

The housing data was tantalizingly capable of several interpretations.  Below are the single family permits, which I favor because they are the least volatile measure, and multi-unit permits:

Not shown, for this expansion the number of total permits issued was lower than only  January and March.

The first takeaway is that the increasing trend in single family permits since 2011 is intact. Hurray!

The second takeaway is that in the last two months, single family permits have declined from their recent high, while multi-unit permits have increased. This *may* mean that increased interest rates have finally bitten enough that some prospective buyers are being forced to back off from buying a single family home, and either buying a condo or renting an apartment instead. This "substitution effect" has happened late on earlier housing cycles, so it is possible it is starting to happen now. If that is true, then we should regard the big surge in permits during the winter as a "buyer's panic," where, fearful of even higher rates in the near future, potential buyers locked in *relatively* lower rates earlier. Time will tell. Like I said, tantalizingly ambiguous.

Here's a look at the more volatile housing starts, both monthly (blue), and quarterly through March (red):

The three month moving average of starts, which I use to cut down on the noise, backed off only slightly from its expansion high one month ago.  Since (not shown) there remain an increased number of units that have been permitted but not started, I expect this metric to continue to increase for at least a few more months.
___________

Industrial production, meanwhile, whipsawed.  There was a big increase in April, but almost as big a downward revision for March. The net result is that production only rose +0.1% from the previous estimate for March. Regardless, the last two months together show a rise of over 1% from February: 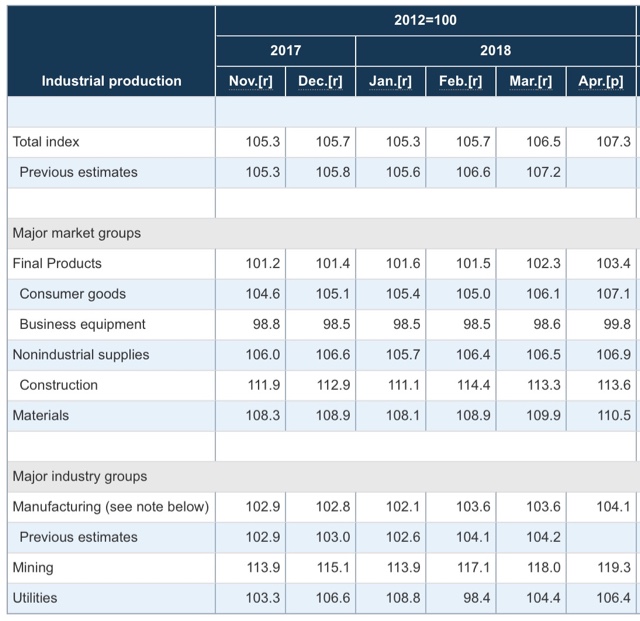 So the positive trend in this king of coincident economic indicators is intact.
Posted by New Deal democrat at 8:30:00 AM