Why does anybody pay attention to Deutsche Bank's economic forecast?


So this morning I read  that OMG yield curve tightest since 2007!!!! Head for the hills!!! Recession coming!!! from Mike "Mish" Shedlock.

And here is the accompanying graph: 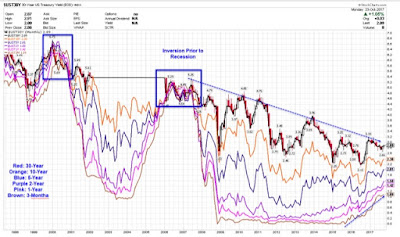 Sure enough, yes, if we focus strictly on the time period from 2008-present, (and don't you dare let your eyes wander to the left of the graph!), the yield curve now is the tightest it has been.

But unless you think the universe came into existence in 2007, you really *should* cast your eyes to the left of the graph, where you will see that the spreads among the various treasury maturities are about where they were in early 2005. Two and one-half years before the last recession.

This made me remember a similar recession call by Deutsche Bank almost two years ago:

What are plummeting interest rates saying about the outlook for the economy? The spread between the yield on 10-year U.S. Treasury notes and two-year notes is the narrowest since 2007. A model maintained by Deutsche Bank analyst Steven Zeng, who adjusts the spread for historically low short-term interest rates, suggests the yield curve is now signaling a 55 percent* chance of a U.S. recession within the next 12 months. That marks the highest probability generated by the model so far in this expansion ....

Here is a graph which accompanied Deutsche Bank's presentation: 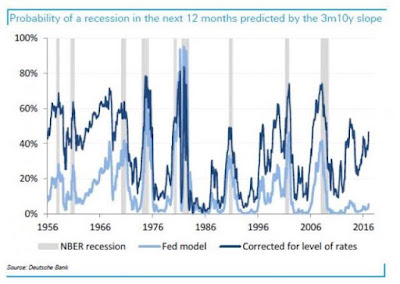 In response, I noted the following:

Here's the problem. Cast your eye to the left end of the graph, the 1960s. You know, probably the best economy the US has had since, well, forever? What does the graph show then?

Apparently, the US was teetering on the edge of recession throughout the entire decade. Hoocoodanode?

Next look towards the middle. There is the 1990s tech boom, second only to the 1960s as the best US economy of our lifetimes. Well, apparently the US was teetering on the edge of recession through that period as well!

So here is a helpful hint. When your Killer App for foreceasting recessions forecast a recession during the two best economies that the US has had in the last 60 years, your Killer App is crap.

Apparently Deutsch Bank figures that once the Fed starts tightening, it will continue pretty much until it sees a recession looming like an iceberg dead ahead.  That may have made sense half a century ago when the US was primarily a manufacturing economy, which was much more volatile -- a GDP that fell from 4% to 2% quarter over quarter was likely headed to 0 or below in another quarter.  That's simply not the case in our service based economy now.

So what was Deutsche Bank saying just a few months ago?  This:

[Deutsche Bank] estimated the probability of a U.S. recession from now to June 2018 at less than 10 percent. 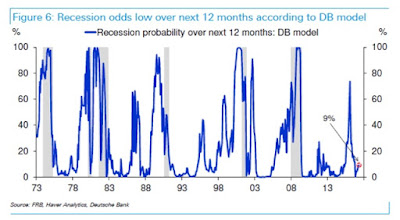 They're back to extreme bearishness now.  Who cares? Why should anybody be paying the slightest bit of attention to a model which has 5 false positives for 6 correct ones?

If Deutsche Bank wants be right, how about hiring me? I'll accept 1/4 of your current crew's pay. Sounds like a win-win move to me.

I haven't read Mish is forever.  Now I remember why; this analysis is, well, ridicules.

Here's a long-term chart of one of my favorite indicators: the 10-year CMT - Fed Funds:

The curve inverts somewhere between 12-24 months before a recession.  Right now, the spread is 123 basis points.  So, we need 123 points of compression before inverting, after which time there's a strong possibility that that we'll see a recession within the next 1-2 years.  Usually, it's the Fed's raising short-term rates that causes the most compression.  As NDD notes, that's just not going to happen in the current environment, thanks to low inflation and a Fed now beginning to debate why inflation is so low.

Using this chart as a basis, we're at least 2 years from a recession.

Or, you could simply go to the Cleveland Fed's website, where they employ a probit model to predict recessions based on the yield curve.  Here's their conclusion

The slightly steeper yield curve did lead to a slightly decreased probability of recession, but the change was minor. Using the yield curve to predict whether or not the economy will be in recession in the future, we estimate the expected chance of the economy being in a recession next September at 12.0 percent, down from the August probability of 12.5 percent (an even one-eighth chance), itself a tiny drop down from July’s 12.9 percent. So the yield curve is optimistic about the recovery continuing, even if it is somewhat pessimistic with regard to the pace of growth over the next year.