Some comments on the economic data from yesterday and this morning...

Real, inflation adjusted income was flat, while real spending was up +0.6%. Which means the personal saving rate declined to a new expansion low:

We've had a steep decline in the savings rate in the past year.  That is something that, as the above graph shows, tends to happen in mid- to late expansion. The upshot is that consumers have less room in their budgets to absorb a future negative shock.

This is some good news. The employment cost index is a median measure, and it tracks payment for the same job over time, and it improved 0.7% q/q, and the longer term trend is positive: 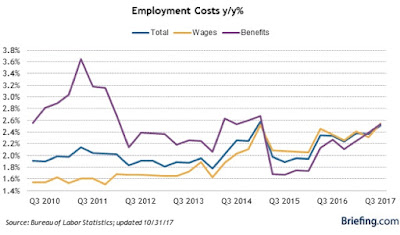 YoY growth of wages, at 2.5%, is just below the expansion peak of 2.6%. At least in terms of measuring payment for the same job, there actually is some improving wage growth.

The Dallas Fed and the Chicago PMI both improved even more from September to October: 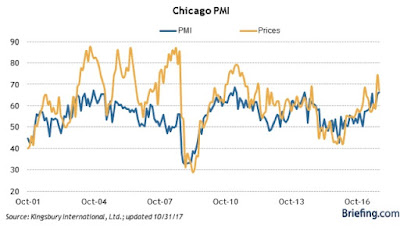 As a result, even taking into account that these have been outperforming industrial production this year, it is likely that manufacturing production when it is reported for October several weeks from now will be a positive, and most likely slightly better than last month's.

These releases are all consistent with an economy that is doing extremely well right now, while laying the groundwork for the ultimate downturn in the form of additional pressures on the consumer.