AT&T is Worth a Look at These Levels

Income streams are an essential component to my investment philosophy.  They help to lower portfolio volatility, provide returns in a stagnant or declining market, and continually provide funds for reinvestment.  I provide more detail in my book, The Lifetime Income Security Solution.

Recently, AT&T (T) qualified by falling to a 52-week low: 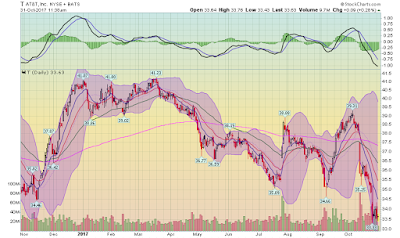 Last week, the stock gapped lower on earnings news (more on that in a minute).  It looks like it’s trying to form a short-term bottom at current levels.

Let’s take a look at T’s financials (as reported by Morningstar.com).

Balance Sheet: their balance sheet could be a lot cleaner.  Their current ratio has been below 1 for the last 5 years, which offends my inner “Graham and Dodd.”  But, large companies also have the financial capabilities to maintain lower capital ratios and get away with it in the marketplace.  At the same time, total equity has increased from $92.3 billion in 2012 to $123 billion at the end of last year – a nice increase for shareholders.  Long-term debt has also increased substantially, climbing from $66.3 billion in 2012 to $113.6 billion in 2016.  However, according to the company’s revenue statement, income expenses have dropped from 2.7% of income to 2% in 2016 – which is largely due to declining interest rates.

Cash Flow: The company – like other large companies – has the ability to self-fund plant, property and equipment purchases from net income.  This means that the primary “play” on their case flow statement occurs in the financial section.  Here, we see a lot debt refunding over the last 5 years (which is to be expected) along with a share repurchase plan.

So – why is the stock low?  Two reasons.

This is an important development, but not fatal.  Entertainment revenue comprises 32% of all income, according to the latest 10-Q.  In addition, it appears the company is working on new products to mitigate this loss of revenue.

The Time Warner Merger: AT&T and Time Warner are trying to merge.  This looks eerily similar to the AOL/Time Warner deal from years ago – which was a tremendous flop.  But that deal simply came too early.  Time Warner has content that AT&T could bundle with its other services.   While there are calls from some groups to halt the merger, or at least give it very close scrutiny, it’s difficult to see the current administration giving this deal the thumbs down.

Finally, there is the dividend, which is 5.85% -- a more than healthy reward for owning this stock.  The only drawback is the payout ratio is very high – 94%, indicating the company needs to grow revenue to continue raising the dividend.

This post is not an offer to buy or sell this security.  It is also not specific investment advice for a recommendation for any specific person. Please see our disclaimer for additional information.