The Amazon.com effect: retailers say they're not selling, but consumers report they are buying

This was originally one post but I think it works better divided into two parts.

One of the issues I keep reading about recently is the (alleged) divergence between "soft" and "hard" data.  For example, consumer sentiment as measured by the University of Michigan (and the Conference Board, and Gallup) has been making new highs since the Presidential election last November (according to Gallup, mainly fueled by a massive gain in optimism among Republicans). while "hard data," chiefly industrial production but also including consumer spending, has failed to follow suit.

One problem with this thesis has been that manufacturing as measured by the industrial production index, turned up for five months in a row.  It turned down in March, and one good measure of how intellectually honest the commentator is, is whether they have been using a consistent measure for industrial production:

So a Doomer who was all over the decline in industrial production for the last two months should be touting its advance in March.  If the Doomer backs out utilities this month, take a look to see if they did the same thing last month -- almost certainly not.

Another problem with the soft/nard data dichotomy is that online retail appears to have reached a tipping point where it is causing big damage to brick-and-mortar retailers, who are laying off thousands of employees and even shutting down completely.
I am concerned that the official real retail sales numbers might not be adequately picking up online retail:

And here is the number that really jumps out -- Gallup's consumer spending, here measured for the last two years: 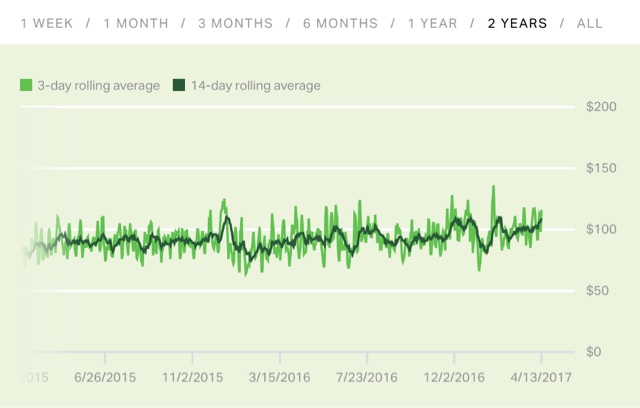 Pay attention to that $100 line. Except for Christmas seaon 2015, that line wasn't breached at all in the 14 day average until December 2016.  And spending has remained above that $100 line all during February, March, and April so far.  Most often for the last 10 weeks, this measure has been up over 10% YoY.  Now, before you criticize Gallup's measure, it earned its bones in 2011 at the time of the Debt Ceiling Debacle, when it was the only measure that accurately reported that consumers hadn't stopped spending.

So if retailers are reporting poor sales, but consumers are telling people that they are spending 10% this year vs. last year, then we have to wonder if the official measures aren't catching the full extent of the big secular increase in online sales.