When I see an article trumpeting an oncoming recession, I will usually take at least a quick look to see if maybe there is an indicator that I've been missing or discounting. Or if it is just the usual cherry-picking of data never relied upon before, and probably not to be relied upon again once it reverses.

So this morning I read that there was a "Gathering Storm of Recession Indicators."
One of the datapoints caught my eye: consumer debt service payments as a percentage of disposable personal income.  Here's the graph in context: 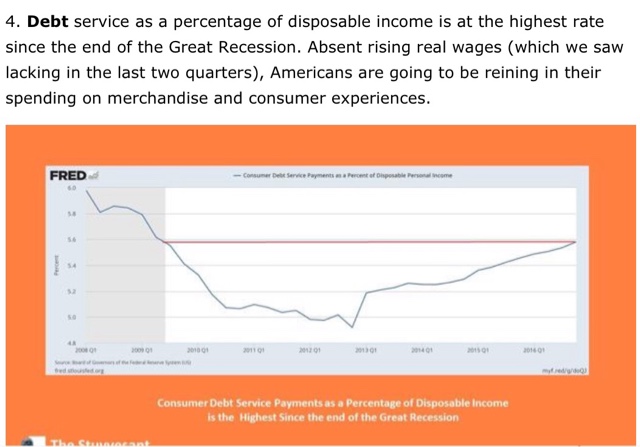 I immediately focused on the limited time shown by the graph:  the last 8 years, with a nice red line showing how the value now is the value then.

I wondered if maybe I was missing something.  After all, this data series comes from the same quarterly report that gives us several other measures of household debt service that I've been following for 10 years, and which have, with one exception, risen into a recession, during and after which they turn down:

Both are pretty much going sideways as of the last report.  Nothing exciting happening there.

So here's what happens when I take the reference graph and follow it all the way back to its beginning: 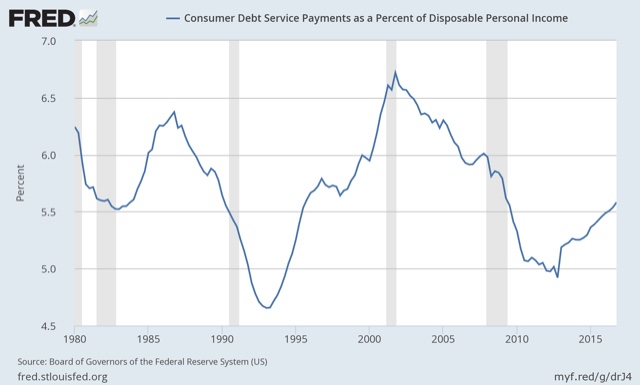 Consumer debt service as a percentage of disposable personal income has been *declining* in advance of 3 of the 4 recessions since the reports were initiated.  In the 4th case, the rising debt level was much higher than it is now.