A note from Bonddad: my apologies for the lack of linkfests over the last few weeks.  I have to admit that the presidential race, particularly the "Trump" situation, has been absolutely fascinating and terrifying.  Never in my life have I seen a likely nominee this incompetent, incoherent and nutty.  Nor have I ever seen someone who is so inept and terrifying from a policy perspective.  And to top it off, he's splitting the Republican party in a fundamental way.

Soul Searching is Beginning at the Fed (Angry Bear)

I have written many times for over a year that the Fed will have a period when they start soul-searching. They will realize that the business cycle got away from them and they will not be able to normalize rates. They just got too far behind the curve.

There is hardly any spare capacity left. Profit rates and top line revenue peaked at the end of 2014. The Fed rate is too far behind the curve. The Fed will not be able to raise rates going forward without triggering a contraction.

The Fed is frustrated. They want to normalize rates, but won’t be able to.

The soul-searching has begun. 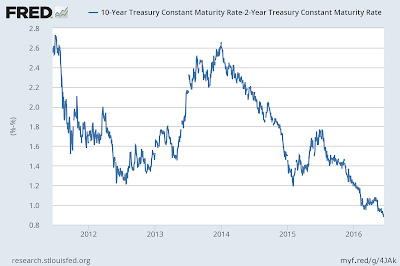 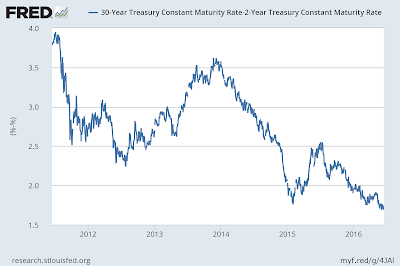 Corporate Profits Have Been Moving Sideways Since 2012

The IEFs Are Still Rallying 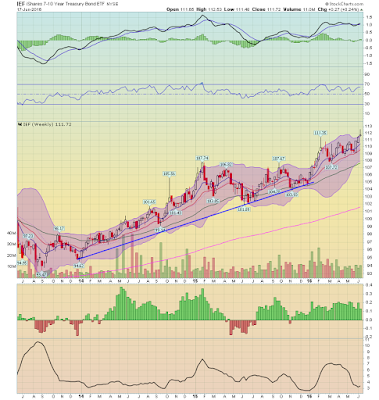 The TLTs Are Near Multi-Year Highs 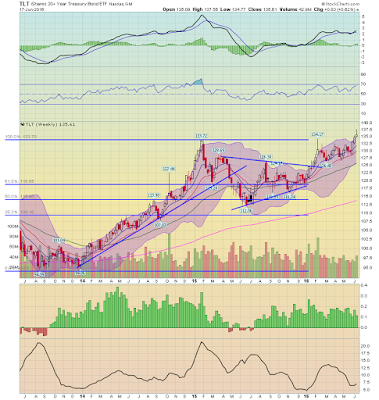 Recession chatter is on the rise lately. “After seven years of expansion, the U.S. economy appears to be headed for a recession,” writes an economics lecturer at Yale. Meanwhile, Bloomberg this week advised that US recession odds increased to 55% due to a flattening yield curve. And a survey of 400 real estate professionals shows that a majority expect a recession within the next 18 months. The dark forecasts may be right—or wrong. Based on the available data to date, however, the probability is still low that the US economy has fallen into an NBER-defined recession in the recent past. 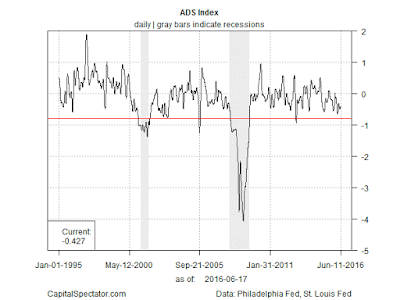 Manufacturing and the Dollar (Econbrowser) 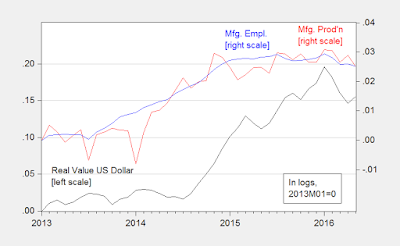 The Global Downward March of Yields Continues (Macro and Other Musings)

This downward march of safe yields is a consequence of the safe asset shortage problem. What we are seeing in Germany is just the latest manifestation of it. What the above figure should make clear is that this safe asset shortage problem has been going on outside of QE programs and before central banks started doing negative interest rates. So don't blame central banks for the low interest rates.1

This downward march of safe yields across the globe is a big deal. It indicates the global economy needs more safe assets and lower interest rates to clear. However, at some point, the effective lower bound (ELB) will kick in and prevent rates from going lower. When that happens something else will have to adjust--output--and there will be a global race to the ELB. Here is Caballero, Fahri, and Gourinchas (2016) making this point... 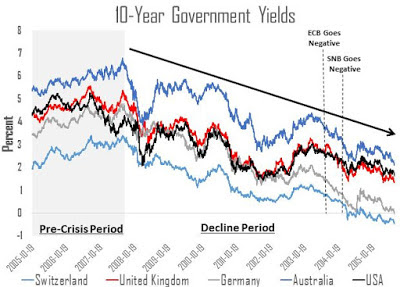