Wholesale inventories and sales: bad news for Q1, good news for the year

- by New Deal democrat
While this morning's report on wholesale sales and inventories for February isn't good news for Q1 GDP, in the longer term it means that the inventory correction is working itself out.
Let's start with the updated inventory to sales ratio for wholesalers, which declined .01 from 1.37 to 1.36:

More often than not, a big increase in the inventory to sales ratio is accompanied by a recession. But a minority of the time, it is just an inventory correction - most importantly, in 1998 when the US$ soared, just as it did in 2014-15. In either case, sales lead inventory, as shown in this graph through December (FRED won't update until next week): 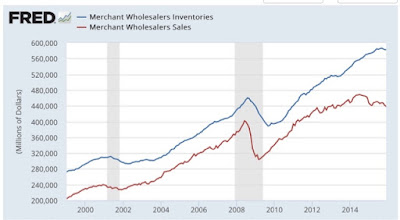 In the inventory correction scenario,
- pressure of the US$ eases - which it already has this year.
- commodity prices firm - which appears to have happened beginning last November.
- new orders increase - which we have from the ISM new orders index in the first three months of this year.
- inventory continues to decline - this is now established for wholesalers for the last 5 months.
- sales increase - not yet (as of February)!
So while a negative GDP print for Q1 becomes more likely (as forecast by the Leading Indicators last summer), the progression of numbers gives me increased confidence that the shallow industrial recession that was caused in large part by the surge in the US$, is coming to an end.
Next week watch for producer prices of commodities YoY.  Here's what they look like now: 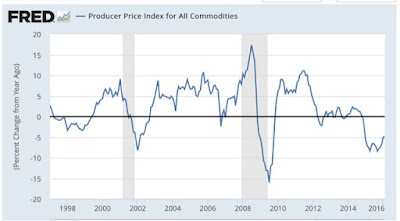 If they get "less bad," that is more evidence that this has been an inventory correction that won't grow into an actual recession.

Here's a 5-year chart of the US dollar: 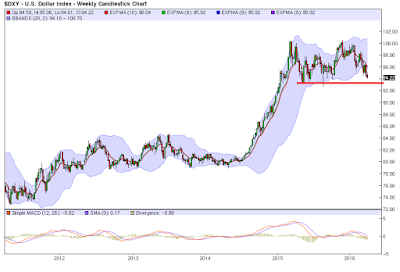 The overall level has moved lower since the end of last year.  But the real test will be a move below the ~93.75 level.  With the Fed on the sideline for now, that's a distinct possibility.

I'm not completely sold on the rebounding commodities story. 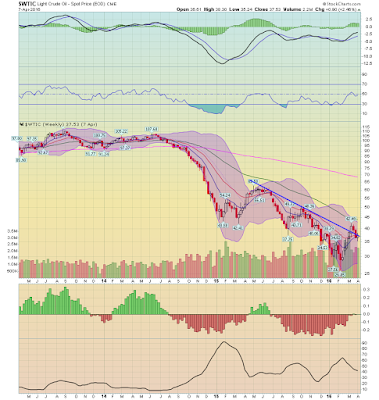 The weekly oil chart is still very bearish.  While prices broke through upside resistance a few weeks ago, they have since retreated below important technical levels.  I'd need to see a move above the 50-week EMA to be sold on the rebound or bottoming story.

Industrial metals have a similar weekly chart to oil: 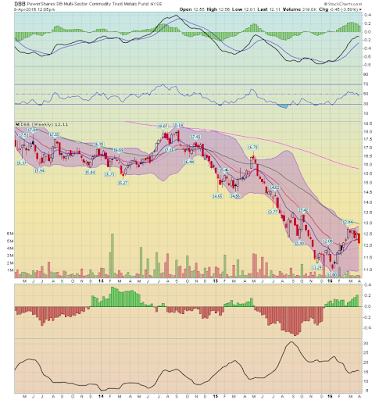 Like oil, we've seen a nice bounce.  But the fundamental picture is still bearish.  China is slowing, lowering their demand.  The global build-out in raw material extraction over the last 5+ years is forcing basic materials companies to continue producing to at least cover fixed costs.  This keeps supply flowing, adding further downward pressure on prices.  So we're seeing an increase in product and lower demand occur when there is weak global demand.

I'm more comfortable with an assessment that a bottom may by in.