The more leading numbers in the report tell us about where the economy is likely to be a few months from now. These were mainly negative

Let me start with the positive.  In addition to the headline jobs number, the best news was the jump in the employment population ratio and the labor force participation rate.  The core e/p ratio for ages 25-54 has jumped +0.5% just in the last 3 months, and has now made up almost 2/3 of the ground it lost in the last recession.  That jump in participation is why both the unemployment and underemployment rates rose slightly.

Another piece of good news is in the leading construction sector, which has added nearly 5% more jobs in the last year. The higher paying professional and business services sector also has added about 3% more jobs in the same time.  Hourly earnings continued to be "meh," although aggregate payrolls grew smartly.

But the negatives, especially among the series that lead, are beginning to outweigh the positives.   Revisions were mixed. The manufacturing workweek declined, and manufacturing jobs are now down YoY. Although temporary jobs rose this month, they have failed to top their December peak for the last 3 months. Short term unemployment has continued to rise slightly. A coincident indicator, aggregate hours, also failed to exceed its January high.

So while we can cheer yet another month of jobs added to the economy, and the jump in participation, this report just adds to my concern about next year.

A few comments on top of NDD’s points:

We’re seeing the long-term impact of the oil market slowdown along with the weaker trade environment.  From the report:

In March, employment in professional and business services changed little for the third month in a row. In 2015, the industry added an average of 52,000 jobs per month.

Industrial production has been weak for the last 12 months while capital investment contracted in the 4Q15.  The combination of these two events means manufacturing jobs will be declining, explaining the drop of 29,000.  And, we’re also seeing broader ramifications of this slowdown.  For example, as manufacturers slow, they consumer fewer professional services, i.e. they are more judicious in using their accountant or lawyer.  This explains the weak pace of professional job growth.

Both the participation rate and employment/population ratio increased .1%.  This tells us that people are coming back into the labor force – another health sign.

However, how long can this pace of hiring continue in the face of weak corporate profit growth? 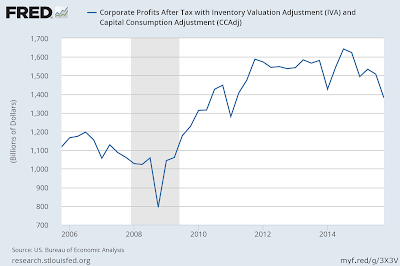 At some point, you’d think businesses would start to cut costs