Why I am optimistic about the near term

Earlier this week I raised a yellow flag for next year, as too many of the long leading indicators are down from their peaks, several seriously so.
But I still don't see the present situation as giving rise to an imminent recession.  Here's why: 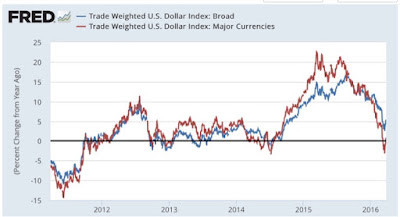 Since the huge increase in the value of the US$ was the biggest reason for the deceleration in the economy last year, that it has abated is good news for the rest of this year.

2. Oil may not have bottomed, but it looks like it is getting close.  The below graph shows the price of gas in absolute terms (blue, right scale) and the YoY% change (red, left scale): 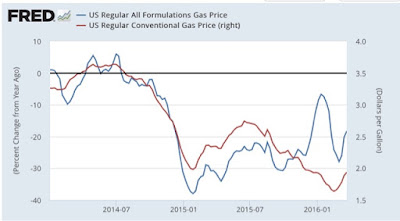 Because gas prices do change seasonally, I am using my rule of thumb that a reading that is "less bad" by 50% from the non-seasonally adjusted YoY% change, is close to a seasonally-adjusted bottom.  Gas isn't quite there yet, but the trend for the last year has been progressively "less bad" YoY% changes.
That means that, while the Oil Patch will remain objectively awful,  it probably won't get much *more* awful -- although I am still waiting for the "dead whale to wash up on the beach," i.e., the bankruptcy of a well-known, major player -- that I suspect will signal the absolute bottom.
3.  Five for five regional Fed indexes showed a surge in new orders.  Here's the completed list for March, including Dallas, which just reported:

This month may be the one time when Friday's ISM manufacturing release may be more important than the employment report.

4. If this is like 1998, ISM new orders will take off to the upside, followed with a short lag by sales, ending the inventory correction.
Here is 1998: 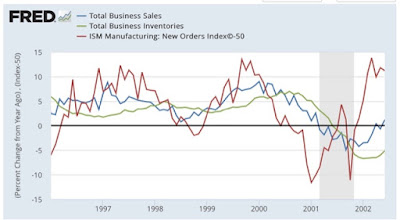 Here is the last 2 years: 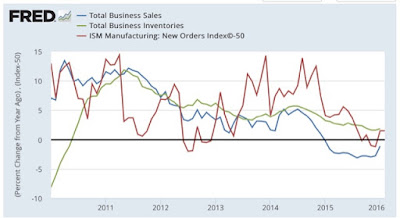 In 1998, a rise in the inventory to sales ratio was resolved not by a recession, but rather by a surge in new orders taking care of the backlog. We'll see if that happens again this time.


5. Mortgage applications are up from horribly low to just low (from Mortgage News Daily): 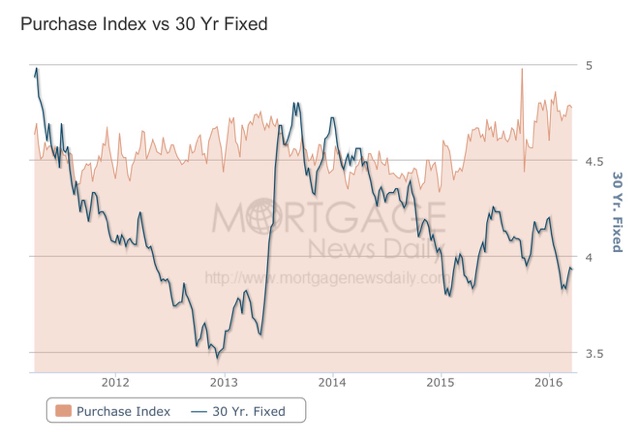 The low interest rates sparked by the "flight to safety" in US Treasuries several months ago are having their natural affect.
Put all of this  together and you have a recipe for industrial production to start to increase, and a likely increase in housing.
That's why I remain positive on the near term, and an important reason why I am reluctant to go completely negative on next year just yet.