When it comes to the monthly JOLTS reports, most commentators in my opinion are missing the big story, focusing only on the job openings number without paying attention to the pattern of this series during the 2002-07 expansion.  And when it comes to that pattern, we have had an important change of trend.

Here are openings (blue), actual hires (red), and quits (green) since the inception of the JOLTS series: 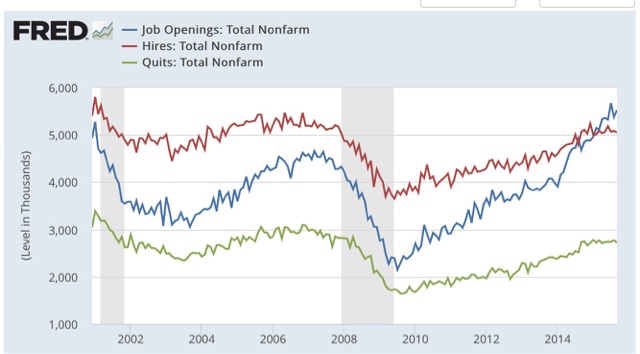 Keep in mind that, while this series looks extremely useful, because there is only 15 years of history, there is only one complete business cycle with which to compare.  During that cycle, both hiring and quits peaked well before job openings. As shown above, the peaks in hiring and the trough in voluntary quits, was the first signal that the expansion was decelerating.

Now let's zoom in on the YoY% change in last 3 years: 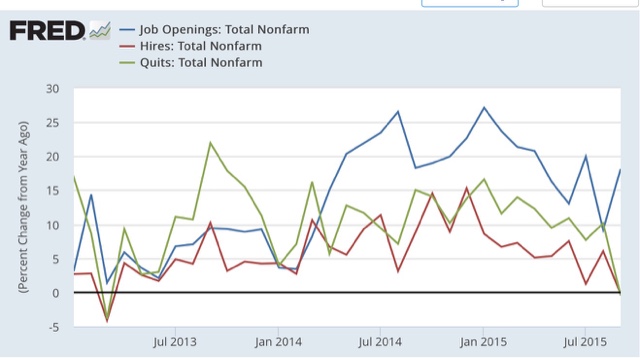 While job openings have skyrocketed, both actual hires and quits stalled, and this month both turned negative YoY for the first time since the 1-month 2012 pause.

This is an important indication that we are past mid-cycle.

Further, there is a labor market disconnect, as employers are not filling a record number of openings.  As to why those openings are going unfilled, I have seen a fair amount of survey information where employers are complaining of not being able to find appropriately skilled candidates. Just yesterday we got the National Federation of Independent Business's report, in which the respondents labeled the inability to find qualified applicants as their number 2 concern (behind the perennial #1 taxes), ahead of the amount of sales: 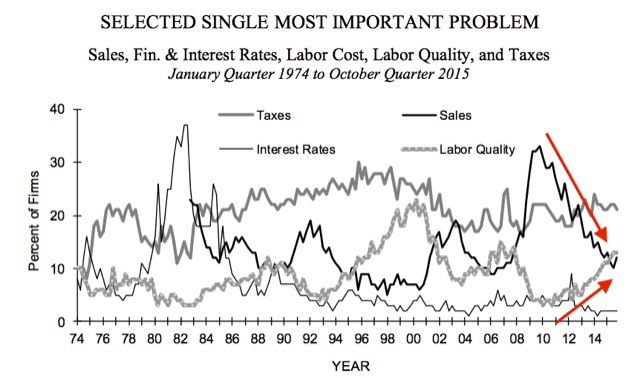 Here's a similar graph from Deutsche Bank that is making the rounds: 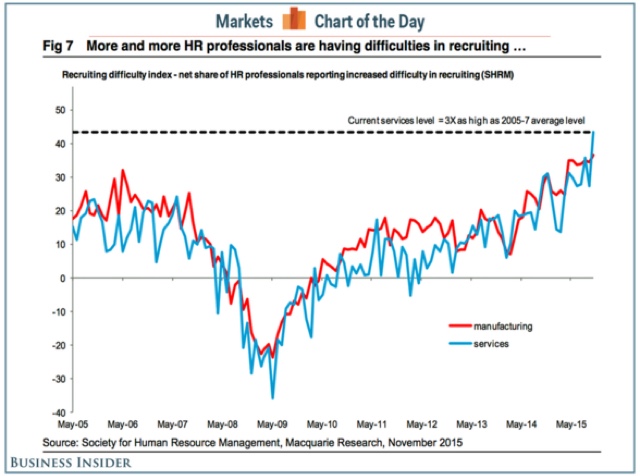 I suspect that there are one or both of two clauses missing in the reasoning cited by small business owners and HR managers, as in:  "We are not able to find skilled candidates [for the wage we want to pay and/or because we refuse to pay for any on-the-job training]."  From the aforementioned NFIB report, note that the percentage of employers who have *planned* higher wages has generally stagnated for the last year: 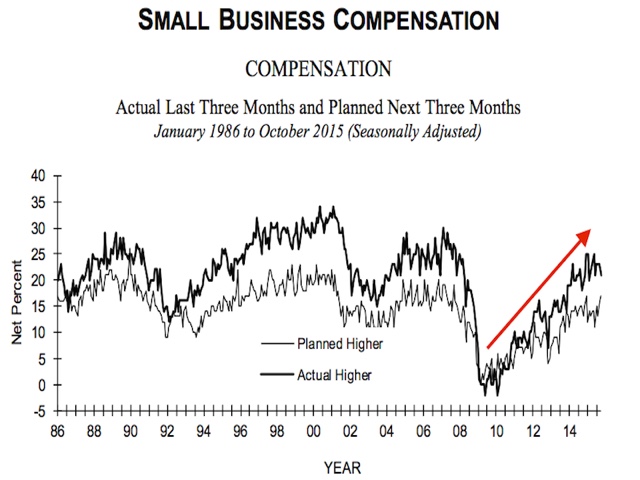 There has been an uptick in the last couple of months -- but note there is still a lower percentage of employers planning to raise wages than during most of the last 3 expansions!

Finally,  I have also recently started paying more attention to the Fed's Labor Market Conditions Index (blue in the graph below), which appears to be a good leading indicator for YoY payroll growth (red): 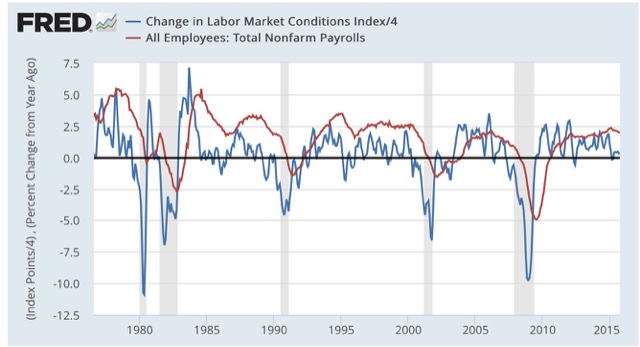 While there were some huzzahs! that there were upward revisions to the last 6 months in this index, the above graph shows that, in context, it is not pointing to strong payrolls growth in the months ahead.  Rather, I expect each such report to be lower than the conquerable report one year ago.  This simply reinforeces the argument that we are past mid-cycle (as the YoY% growth in jobs generally peak near mid-cycle).

In short, I continue to be underwhelmned by JOLTS reports where job openings don't translate into actual hires.  Hopefully the October jobs report, along with the NFIB report on planned wage hikes, indicates that the dam is finally beginning to break, and increased wages will translate into increased actual hiring.
Posted by New Deal democrat at 9:49:00 AM