I recently wrote about the compelling evidence that the biggest reason for the decline in the prime working age labor participation rate was the "child care cost crunch," i.e., the increase in the number of second-earner spouses who decided to stay at home and raise their children, occasioned by the particularly significant decline in wages among lower quintile jobs, together with the soaring costs of outside day care.

In my post yesterday, I showed that the biggest reason why the percentage of both mothers and fathers of minor children who have dropped out of the labor force has increased, is in order to care for their children -- not discouragement, not disability, not education, and not any other reason.


But that is not the end of the story, even though over 80% of men and women eventually become parents of minor children.  In particular, there are other studies which put the spotlight on an increase in disability claims.  In particular, the Atlanta Fed went to the trouble of decomposing the monthly data as to why people aren't in the labor force over the last 16 years.  The graphs are interactive, and illuminating.
To cut to the chase, the Atlanta Fed found that the single biggest reason for the increase in labor force non-participation was disability claims: 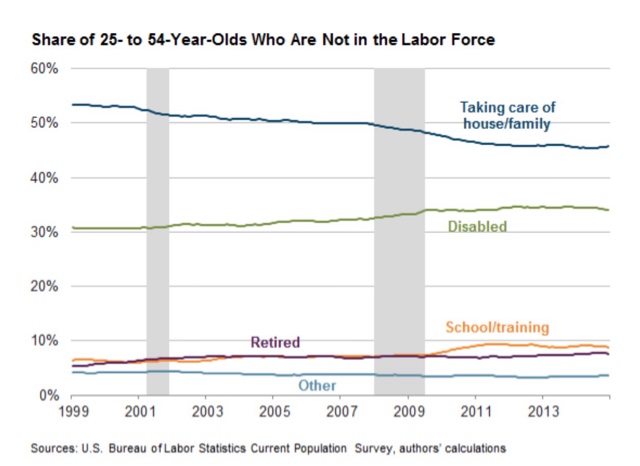 A similar graph was compiled in a separate report: 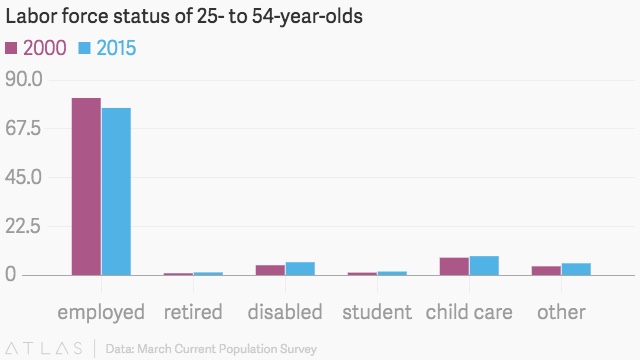 So that's it, the real reason for the increase isn't the "child care cost crunch" but disability, right?  Well, yes and no.  To see why, let's go into the Atlanta Fed's interactive database a little more closely.
At age 50 and above, there has been an outsized increase in the percentage of labor force participants who say they are disabled.  That is the lion's hsare of the increase in disability claims: 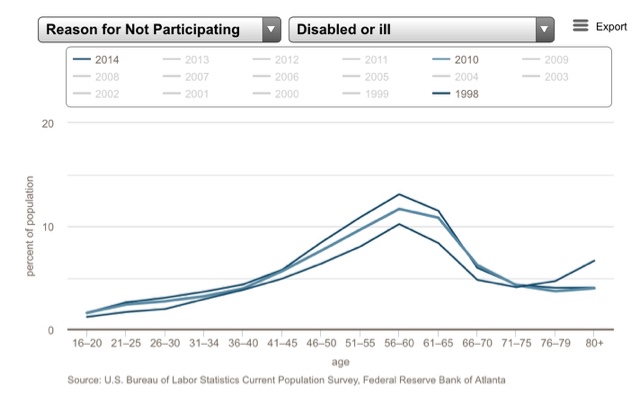 Part of this is simply the overall aging of the labor force during that time. Older people are more likely to be disabled. 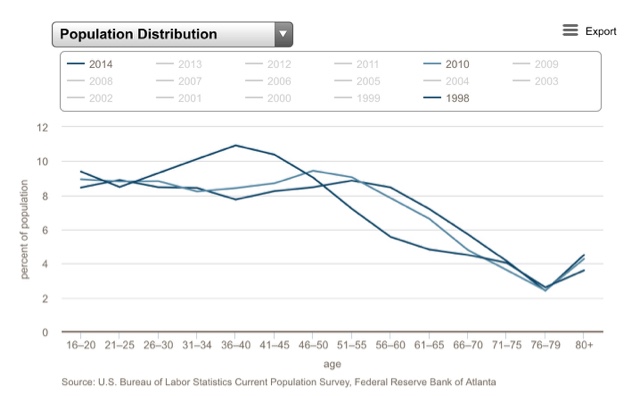 But the big news is the mirror image big decline in people aged 50 and over saying they are homemakers between 1998 and 2014: Aside from this huge anomaly that begins at age 50, what we are left with is a sustained increase in people in their 30s and 40s who are staying home to take care of thier children.

What can explain this shift from homemakers to disabled former workers over age 50?  Was there a group,who formerly, say before the 1970s, were largely homemakers, who entered the labor force as young people, say in the 1970s and 1980s, and who are older now and, because they were  working, can go on SS disability?

Of course! The aging of women who entered the labor force is the answer.  First of all, here's the familiar graph showing the big secular increase of women in the workforce between 1965 and 1995: 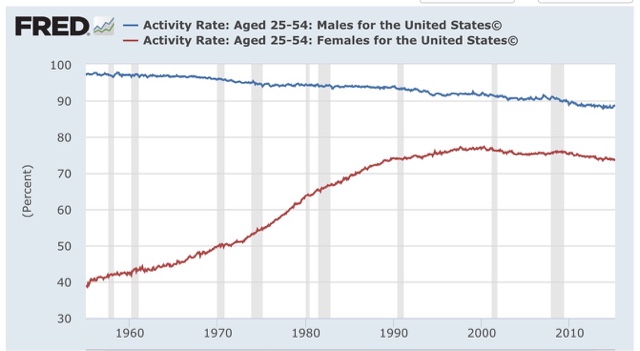 Consider the two cases of June Cleaver, 1950s homemaker, and Roseanne Conner, 1980s blue collar mother. When June Cleaver got older and more infirm, presumably she have told the Census Bureau that she was still a homemaker. Contrarily, when  Roseanne Conner became older and more infirm, she would probably tell the Census Bureau that she was disabled, not that she had chosen to be a homemaker.
In short, homemakers don't go on disability.  The big surge in those identifying as disabled in their 50s after 1999 probably reflects the fact that they are the group of women who when they were 18-25, entered the workforce between 1965 and 1995.
-----
Another source of pushback against the idea that the decline of wages for second earners compared with the price of daycare for children came from the Financial Times.

As an initial matter, the FT's article clearly shows that the most striking feature of the change in the US labor force since 2000 in comparison with every single other country, has been the big decline in women in the labor force: 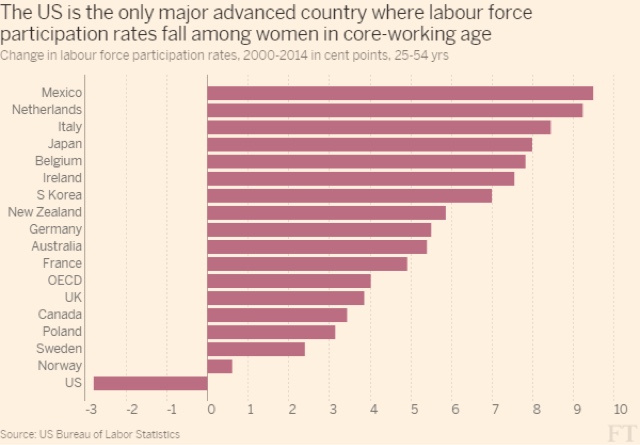 There is no such equivalent defference for men.
But  the FT then pointed out that among the prime working age demographic, the percentage of women who were not in the labor force actually declined *more* for women who were not mothers of minor children. ere's their graph: 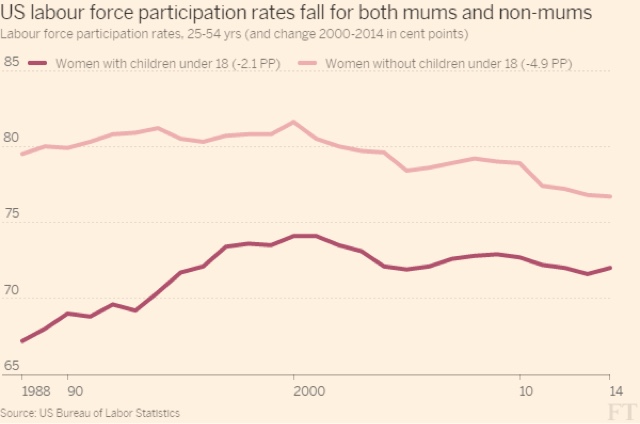 Here the problem is at the other end of the age spectrum.  Look at the below graphic of the age at which women have typically have their first child over the last 30 years: 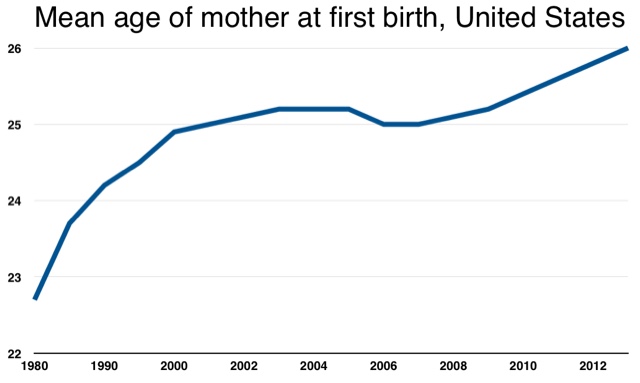 For most of the last decade, an absolute majority of 25 year old women had not yet had their first child -- and that age is still increasing!
And now let's go back to the Altnata Fed's interactive graphs, and show what has happened among younger adults who say they are not working because they are pursuing an education: 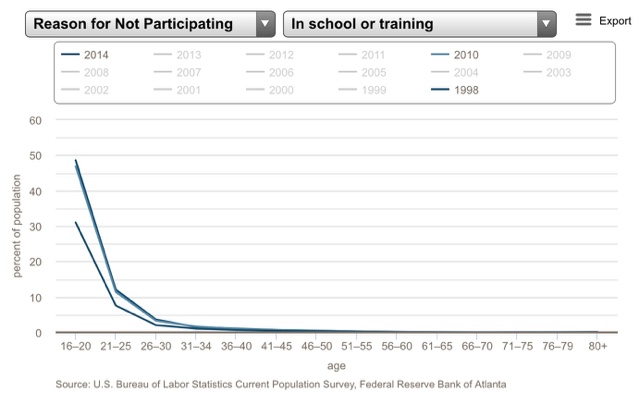 This  shows a big increase in people in their 20s who are not in the labor force because they are continuing their educational studies.  That's the explanation for the statistic cited by the Financial Times. The relatively big increase in childless women age 25 -54 who are not in the labor force (note: only about 18% of women ultimately fall into this category) is because of the big increase in this population at the youngest end of the range, and we know why that group is not in the labor force.
-------
In conclusion, put together this information with that published by the Pew Foundation, and we have a pretty complete picture of why there has been a decline in the prime age labor force since 1999:
1. There has been a spike in the relative number of disability claims among older workers, with a concomitant downward spike in the relative number of homemakers among older workers, as the demographics of women in the workforce has aged.
2. Parents of both sexes of minor children have been leaving the labor force in order to care for their minor children,  driven by declining real wages for those jobs held by the second earner, and exacerbated by the surging costs of child day care.
3. A smaller part of the increase is explained by young adults seeking a competitive advantage in the workplace by staying in college longer to obtain deboth undergraduate and graduate degrees.
The mystery has been solved.
Posted by New Deal democrat at 9:48:00 AM