The decline in prime age labor participation: the smoking gun (Part 1of 2)

I recently wrote about the compelling evidence that the biggest reason for the decline in the prime working age labor participation rate was the increase in the number of second-earner spouses who decided to stay at home and raise their children, occasioned by the particularly significant decline in wages among lower quintile jobs, together with the soaring costs of outside day care.

Since that time (and I'd like to think in part because of my argument), the issue of the "child care cost crunch" has become much more visible, with the candidates in the recent Democratic Presidential debate weighing in, in support of more assistance for working mothers.

For example, Fortune magazine repored that:

the Economic Policy Institute (EPI), a worker advocacy group, finds that caretaking costs have become so exorbitant that in most parts of the U.S., families spend more on childcare than they do on rent (included in that number: babysitting, nannies, and out-of-home day care centers.
I think [the cost of childcare] plays a role in a woman’s decision to go to work,” says Gould. “It is taking a toll on labor force participation and therefore on the economy.”
Measuring child care costs against a variety of benchmarks—including the cost of college tuition, the HHS’s 10 percent affordability threshold, and median family incomes—demonstrates that high quality child care is out of reach for working families.

And the Pew Research Foundations updated its study of the impact of child care on the careers of mothers in the labor force:

[W]hile 42% of mothers with some work experience reported in 2013 that they had reduced their work hours in order to care for a child or other family member at some point in their career, only 28% of fathers said the same. Similarly, 39% of mothers said they had taken a significant amount of time off from work in order to care for a family member (compared with 24% of men). And mothers were about three times as likely as men to report that at some point they quit a job so that they could care for a family member (27% of women vs. 10% of men).
It’s important to note that when we asked people whether they regretted taking these steps, the resounding answer was “No.”

To briefly recapitulate my posts from August, against a backdrop of surging costs for child care, and declining real wages for the lower quintile jobs occupied by second earners, the number of stay-at home dads has increased from 1.1 million to 2.0 million between 2000 and 2012, and  the increase in the percentage of stay-at-home dads who are caring for their children is the primary reason: 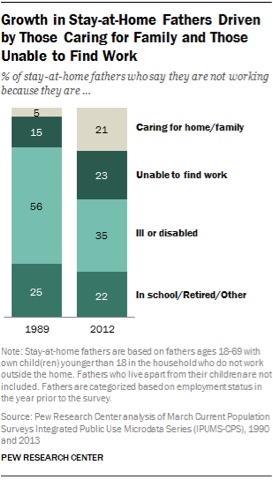 Further, the percentage of mothers who are staying at home has also increased, going from 23% in 1999 to 29% of all mothers of minor children in 2012, as shown in the graph below: 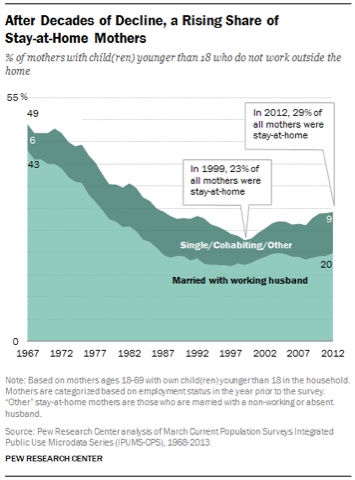 The Pew study found that as of 2012 the vast majority --  85% -- of stay at home married mothers say the reason for not working is to take care of their children.  Including both married and single mothers, the  number of stay-at-home moms is about 10 times the number of stay at home dads.

What we didn't have was  the *reason* those mothers have dropped out of the labor force since 1999.  That was the missing " smoking gun."  Until now.

Thanks to Gretchen Livingston of the Pew Foundation, who provided me with additional information, I was able to generate the following chart detailing the relative increases in mothers who dropped out of the labor force due to discouragement, child care, disability, and other reasons including education and retirement:


*includes education, retirement, and other


This is the smoking gun.  As you can see, the number of mothers who dropped out of the labor force in order to raise their minor children outstripped  all other reasons including those who wanted a job, consituting nearly half of the total.  Note by the way that the number of those who are out of the labor force but want a job now has declined by about 1 million since 2012, so the likelihood is that as of 2015, the effect of rising day care costs and declining real lower quintile wages is even stronger.

Since According to the Census Bureau, by age 40, 81% of all women have borne at least 1 child, the number of mothers utterly dwarfs the number of prime age women who are not mothers (and, ahem, by necessity of reproductive biology, it is similarly true of men).  Together, the numbers of women and men who are staying at home to raise their children, solve the mystery of the decline in the labor force participation rate among the prime working age population.

In Part 2, I will address issues raised by an Atlanta Fed study of the microdata, and in prticular, disability.  I will also address some pushback against the "child care cost crunch" meme by the Financial Times.
Posted by New Deal democrat at 7:30:00 AM