Via Mark Thoma, Prof. Stephen Williamson writes a nice, thorough post on the state of the labor market, which is well worth reading in full.


One point on which I disagree with his analysis has to do with the Beveridge curve, i.e., the tradeoff between the unemployment rate and job openings, which he graphs here: 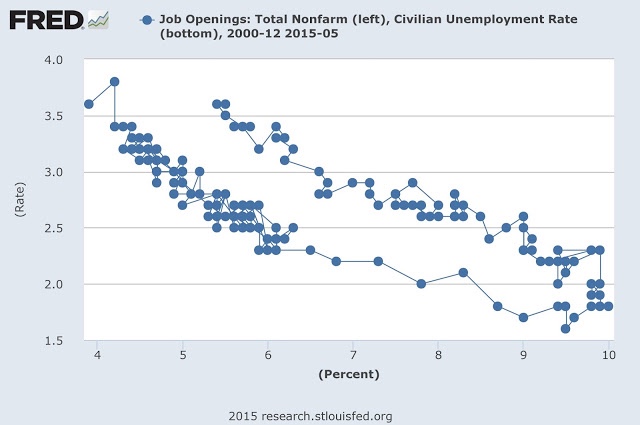 And he concludes his review in part thusly:

In other words, the labor market is tight because even with a U3 unemployment rate of 5.3%, job openings are soaring. Although he doesn't mention it, there are more job openings now than even during the height of the tech bubble at the beginning of 2000!

I disagree.  And the reason can be found with wages.  Below is a graph of job openings, minus new hires (i.e., the number of unfilled job openings) (blue) vs. YoY nominal wage growth (red): 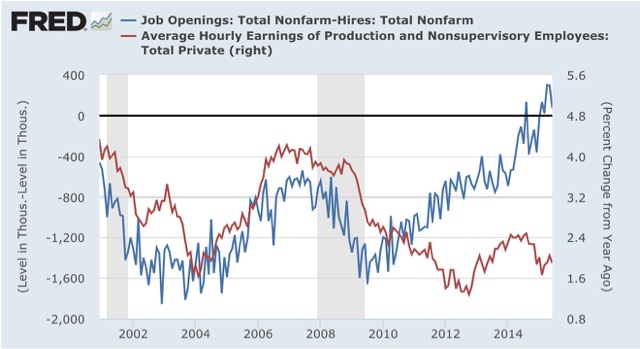 By and large, the two series moved in tandem since the JOLTS series began in 2000, through 2010.  Since then, there have been three distinctive episodes:

This is a market which is not clearing.  Prospective employers and employees are at a standoff. To put it less charitably, employers can't find workers to fill their job openings ... for the paltry wages they want to pay them.  With near record corporate profits, that isn't a tight labor market. It's tight-wads.
Posted by New Deal democrat at 8:00:00 AM