What is driving the long term decline, shown in the graph below, in the labor force participation rate (LFPR) among prime working age adults, ages 25-54? 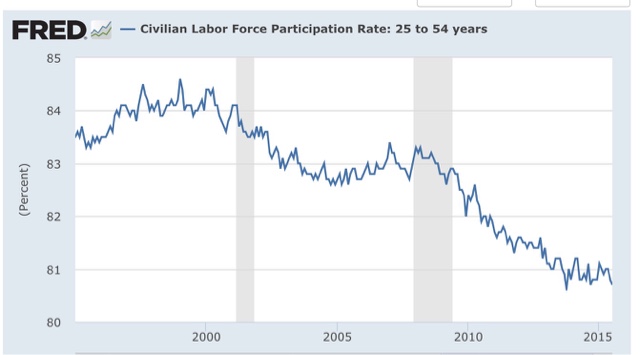 A couple of weeks ago I wrote that it wasn't poor job prospects.  In that post I ran the following comparison.  First, I calculated the number of persons in age group both unemployed and also not in the labor force for age group 25-54.  That is the (red line in the graph below).  Then I calculated what the  number would be if we added together the unemployed in that age group, plus a proportionate share of  those Not in the  Labor Force, but Who Want a Job Now (blue): 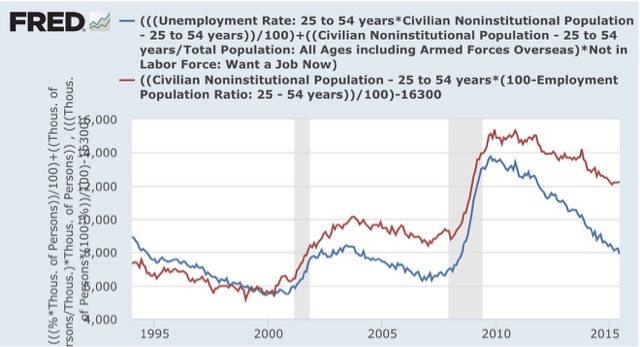 If the primary explanation for the decrease in the employment-population ratio for ages 25-54 were the inability to find a job, the result of the two calculations should be the same.  In fact, the second calculation (in blue)  gives me a much lower value.   That tells us that the primary driver of the increase in persons not being employed in age group 25-54 is not poor job prospects.

There is compelling evidence that  the main culprit is increased child care costs, paired with stagnant or declining real wages.
Let's start with a framework for the discussion.  Many families face a familiar choice between hiring a contractor vs. doing it yourself for a variety of tasks.  For example, do I mow my lawn myself, or do I let a landscaper do it? All else being equal, higher costs for hiring a contractor will cause some increase in the number of homeowners who decide to do the task themselves.  The same process would apply to other tasks, like hiring a painter or someone to install a new automatic garage door.

But since all of the above tasks can be done on nights or weekends, a choice to perform them doesn't mean the homeowner doesn't have to give up time from work to go the DIY route.

So, what has been happening to the costs of child care?  And what has been happening with real wages, especially in the lowest two quintiles of paying jobs, which a second income earner in a household is likely to be in (the primary earner by definition holding a higher paying job)?  There is strong circumstantial evidence that both the real cost of day care has risen, and real pay in the lowest two quintiles has been particularly hard hit.  In other words, the data supports a hypothesis that the secular decline in the LFPR among working age families has largely being driven by the issue of child care.

To begin with, the real, inflation adjusted cost of child care has been soaring for 30 years with nary a break: 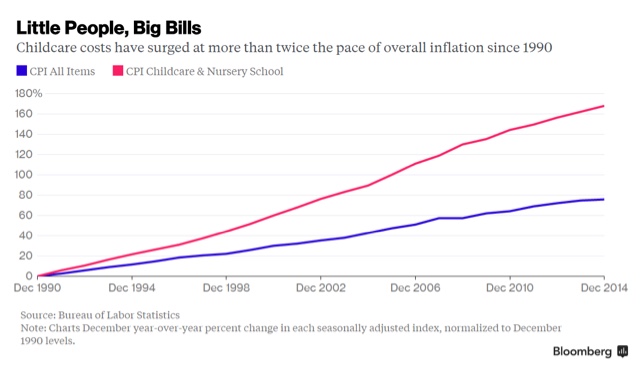 The Bloomberg article last week which featured that graph explained:

There’s been a growing push for childcare workers to be better trained and educated, and the costs associated with those efforts make it tougher for managers to scrape up pay increases for existing personnel, said Anna Carter, president of the Chapel Hill, North Carolina-based Child Care Services Association.The mismatch in supply and demand has made childcare a “broken market,” said Marcy Whitebook, director and founder of the Center for the Study of Child Care Employment at the University of California at Berkeley.

In accord is a note from the Pew Research Center in 2014:

"Mothers who do work are paying more than ever for child care. In  inflation-adjusted dollars, average weekly child care expenses for families with working mothers who paid for child care (24% of all such families) rose more than 70% from 1985 ($87) to 2011 ($148), according to research  by the Census Bureau. For those families, child-care expenses represent 7.2% of family income, compared to 6.3% in 1986 (the earliest year available).

Meanwhile, in particular since the Great Recession, median pay for the lowest quintile of jobs declined more than any other category, into 2014, the latest data I could find, from the National Employment Law Project: 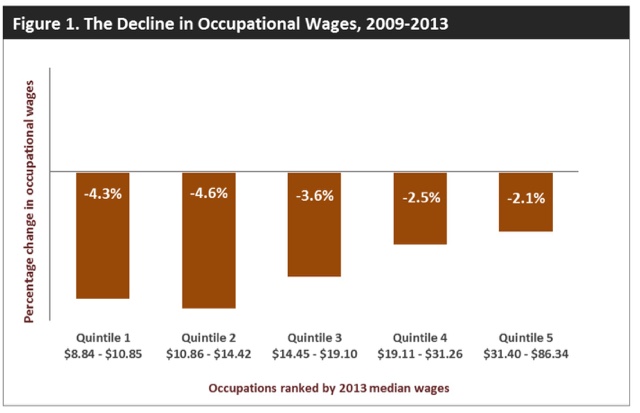 That means a household with a second earner whose job pays among the lowest 20%, and well into the lowest 40%, might actually have a net financial gain by foregoing the second income to dispense with day care costs, and get the benefit of having a parent at home full time to run the household and be with the kids when they aren't in school. 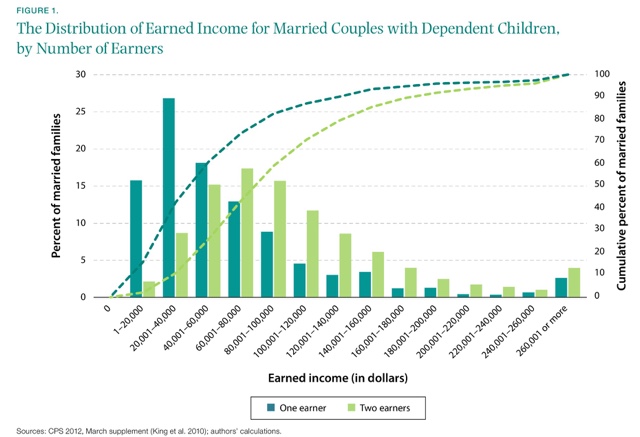 Remember that we are dealing with the *change* in the cost-benefit analysis that families make.  As a simple matter of supply and demand, that day care costs have far outrun inflation, and that real wages among the lower two quintiles of jobs have declined, and declilned by more than the upper quintiles, implies that more parents would make the choice to stay at home.

This hypothesis gains some support by correlating well with the fact that LFPR for those aged 55-54 did not decline during 2000 - 2007, but rose: 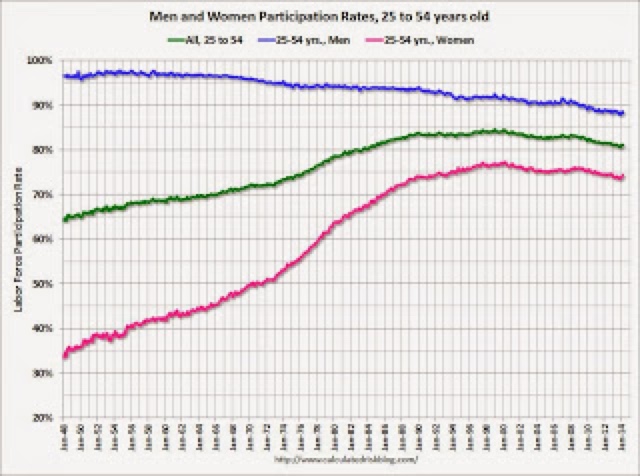 (h/t  Calculated Risk)
Thirty years ago, men who might otherwise have wanted to stay at home to raise their kids faced intense societal pressure to work anyway.  Now, not so much.  According to the Washington Post last year:

The new Pew Research Center report found that in 1989, only 5 percent of the 1.1 million at-home fathers said they were home to be primary caregivers. That share has increased four-fold now to 21 percent, a sign not only of the power of economics in reshaping traditional family structures, but of shifting gender norms.

"The assumption that a lot of people make is that the number of stay-at-home dads went up because of the recession. And while that’s absolutely true, even if you take out that trend altogether, the fact is the number has been going up over time, regardless. And the biggest increase is in the share of fathers who want to stay home to take care of kids," said Gretchen Livingston, author of the new report. "That’s very striking."


The Pew Research study findings are nearly a "smoking gun" in support of the thesis  that that  the increase in stay at home parents are the force driving the decrease in the prime working age LFPR.

In other words, even shortly after the end of the recession, 45% of the entire increase in stay at home dads since 1989 was in order to raise the children.  While by no means a perfect fit, that is still pretty close to a "smoking gun."


Update 2: I have now found an equivalent study by the Pew Research Center about stay at home moms.  The study states:


A little math shows that the number of stay at home moms for reasons *other* than inability to find a job has risen by 4.5% from 22.8% in 1999 to 27.3% in 2012.  The Pew study on women does not break down this remaining number by those staying home due to disability, retirement, education, or other reasons besides raising children.
Of course this is not conclusive, and correlation is not necessarily causation.  In particular, I have no information as to how the real  median wage of second earners has changed over time.