In mt last post, I politely took issue with Dean Baker's claim that August's mediocre jobs number was not an outlier.  Rather, I pointed out, for the last 3 /12 years we have had an unusually strong trend in job growth compared with GDP growth.

The YoY percentage of jobs added since World War Two  has been about -1.5% less than the YoY percentage growth of real GDP.  In other words, if GDP is about 2%, about half of the time there has only been  0.5% job growth or more, and about half the time there has been less than 0.5% growth.  Since the beginning of 2011, however, GDP has grown gernerally between 1.5% and 2.5% a year, but job growth has also ben about 1.5% a year -- about 1% higher than that median historical trend. 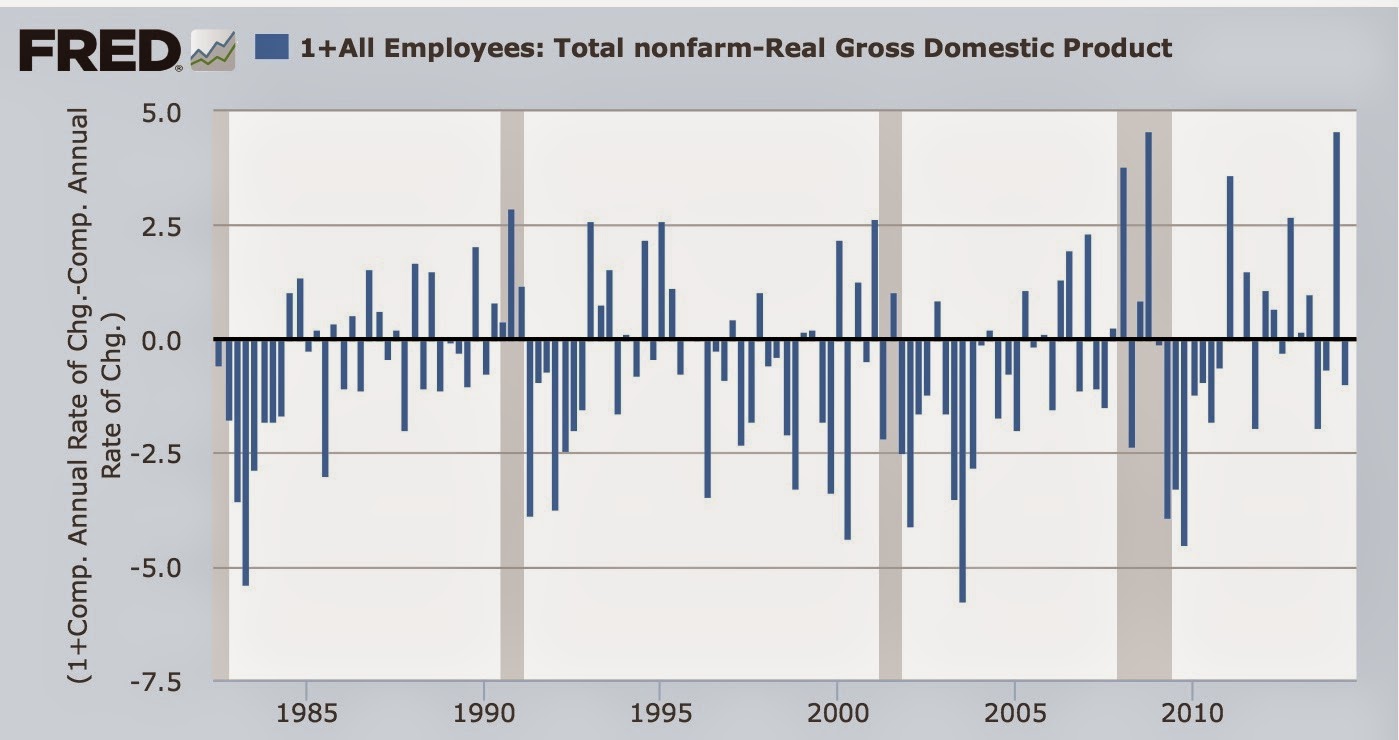 So why have jobs, relatively speaking, so significantly outperformed GDP?  Here's my working hypothesis.

Here is a graph you've seen a number of times before.  This is a graph of initial jobless claims as a percentage of the entire civilian labor force, plus those who are not in the labor force but want a job now: 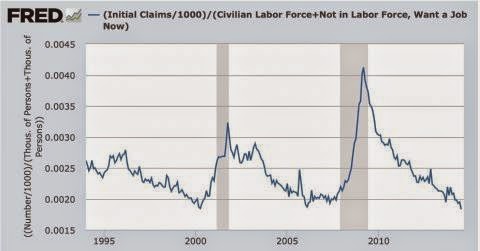 What this adjustment does is tell us what percentage of people who hold a job, or want a job, are laid off in any particular week. In this way it takes into account demographics and in particular, the large cohort of Boomers over 55 years old who are retiring in droves.

What you can clearly see is that this ratio is extremely low.  Relatively speaking, the rate of layoffs is equal to the lowest in the last 50 years.  Another way of looking at this data is that employers are running particularly tight ships.  Compared with the entire post-WW2 era, they have pared the number of workers they need down to the absolute minimum for the current level of work.

The next graph is the percentage of all jobs that are temporary jobs: 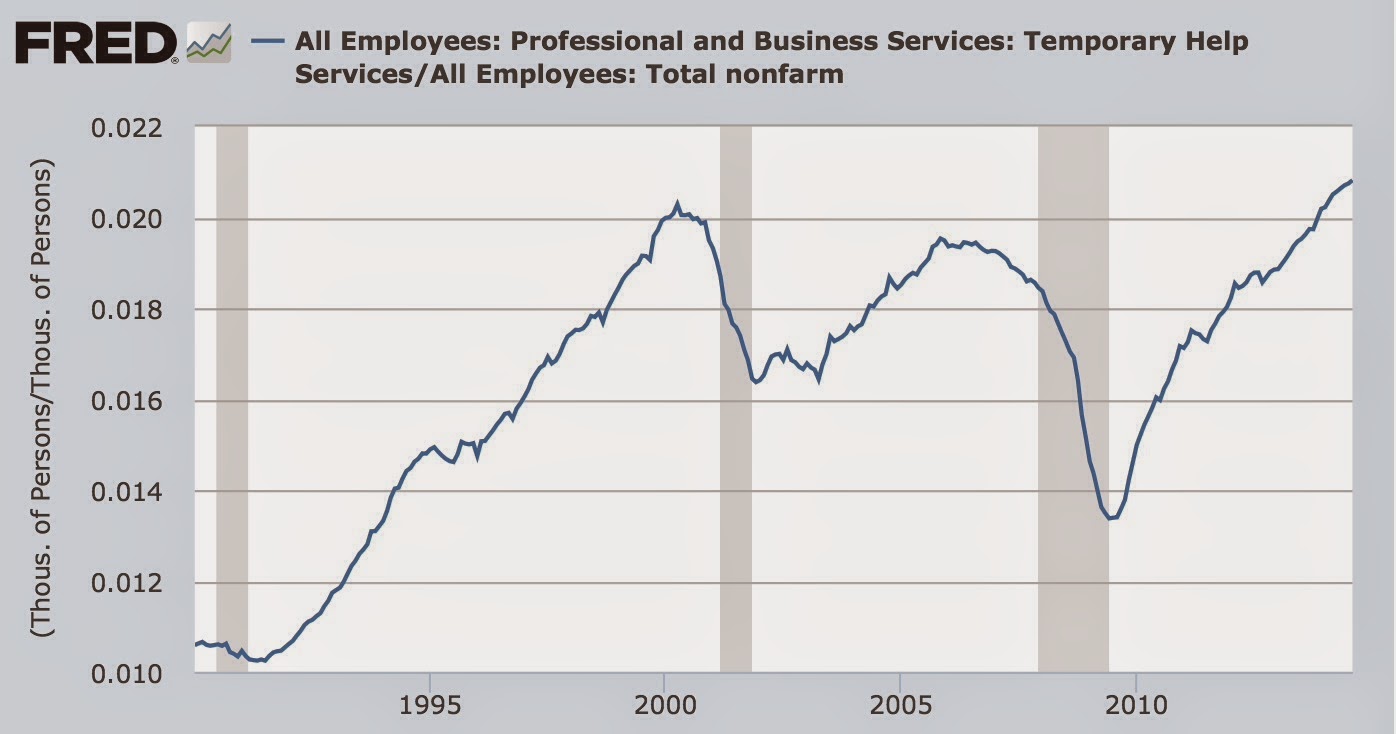 This graph is just the opposite of the initial jobless claims graph.  It is at an all-time high.

Putting this all together, we have an employment environment where, compared with the post-WW2 era, employers have exactly enough employees to cover a regular workload with no slack whatsoever.   When the workload increases, the existing workforce is not sufficient to handle it.  New workers, with a bias towards temporary workers (who aren't entitled to medical benefits and whose contract can be terminated at any time) need to be employed.  This compares with the earlier era where new work meant that the slack in the workloads of existing employees was pared down.  The net result is that increased activity (increased GDP) leads to a need for relatively more new hires.

One way to test that is to compare hours worked with jobs created.  Once existing workers are pushed to the limit, the only way to increase output is to hire more workers.  As it happens, we can test exactly that by comparing aggregate hours worked in the economy (blue) to total jobs (red), and norming each to their prior peak in 2007: 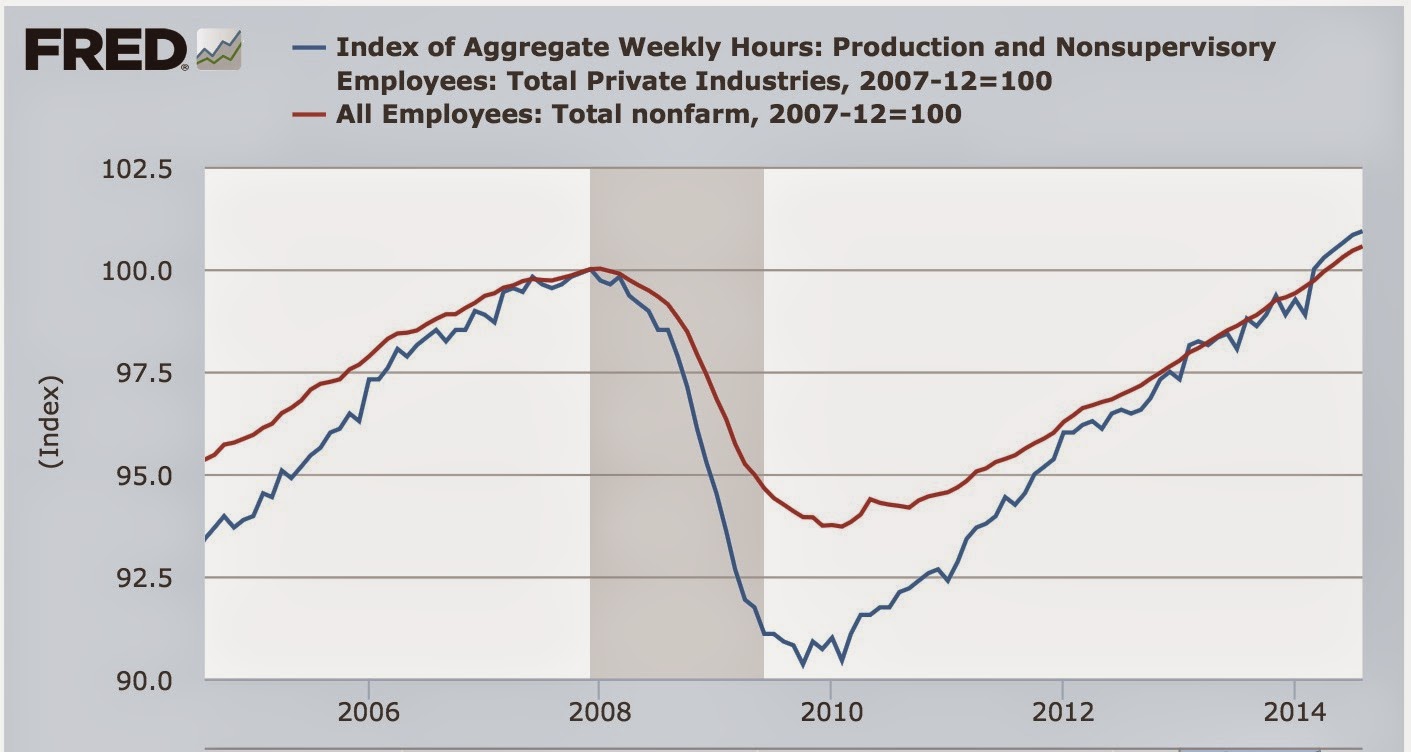 What we see is that aggregate hours increased more than jobs until the entire shortfall was made up by about the beginning of 2012.  Since that time, both series have moved in nearly identical trends.  While it's not a perfect fit, it suggests that at least since the beginning of 2012, current employees have been fully utilized.  Increased output has required additional workers.

It seems to me this is a good explanation for the relative outperformance of job growth vs. GDP growth in the last 3 1/2 years.