This Friday we'll get the employment report for May.  Since it's going to be a busy news week, I thought I'd put right out front what I'll be paying particular attention to in that report, and it boils down to three specific data points.

Unless there is a huge surprise, we know that the economy will have added jobs, and the unemployment rate will be somewhere over 6%, and probably won't move much.  In other words, there's no reason to obsess over the headline numbers at this point.

Meanwhile, the economy as a whole has moved beyond the "recovery" stage into the "expansion" stage.  Production, sales, income, and almost certainly as of this Friday employment will all have exceeded their pre-recession levels.  But while the economy as a whole is continuing to expand, and there's no reason to think it won't continue to expand at least through the end of this year, on a per capita basis American households are still languishing.  Wages have employment have lagged.

So it is three measures of wages and employment that I will be particularly observant of this Friday:

This is a self-explanatory data series.  As I've pointed out repeatedly in the last few months, this is the only number you need to know to determine the "real" unemployment rate.  Even at the height of the tech boom, there were about 4.3 million people who fit this decription.  That number rose to 7 million in the wake of the recession, but has declined significantly in the last 18 months: 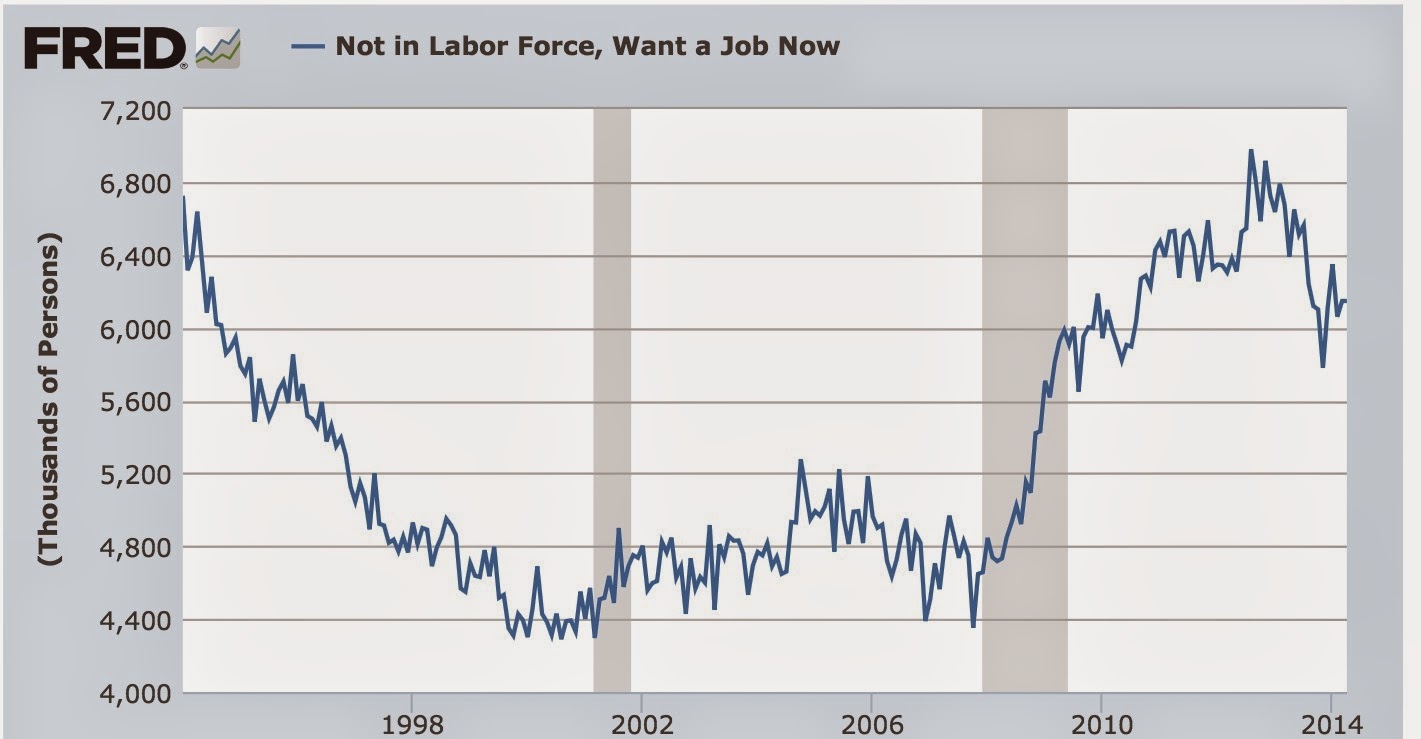 As of last month, there were 6.146 million people in this category. A decrease would be positive, and a decline to under 6 million would be a good number.  I'd like to see this number decline to about 5.5 million by the end of this year. 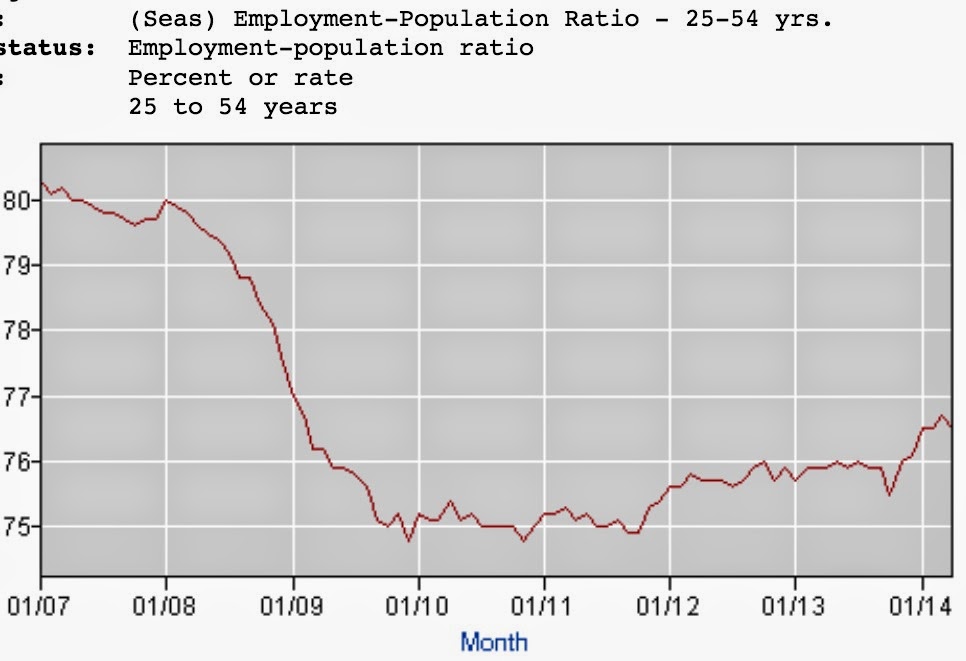 A continuing increase would be welcome.  I would like to see this number at 77% or higher by the end of this year.  That wouldn't be great, but it would be nearly half the way back.

While a median measure would be nicer, those aren't reported on a monthly basis.  This average measure does not include managerial personnel, so is a good monthly measure of how the average American wage or salary worker is doing.  To get to the "real" average wage, in the below long term graph I have normed by the CPI: 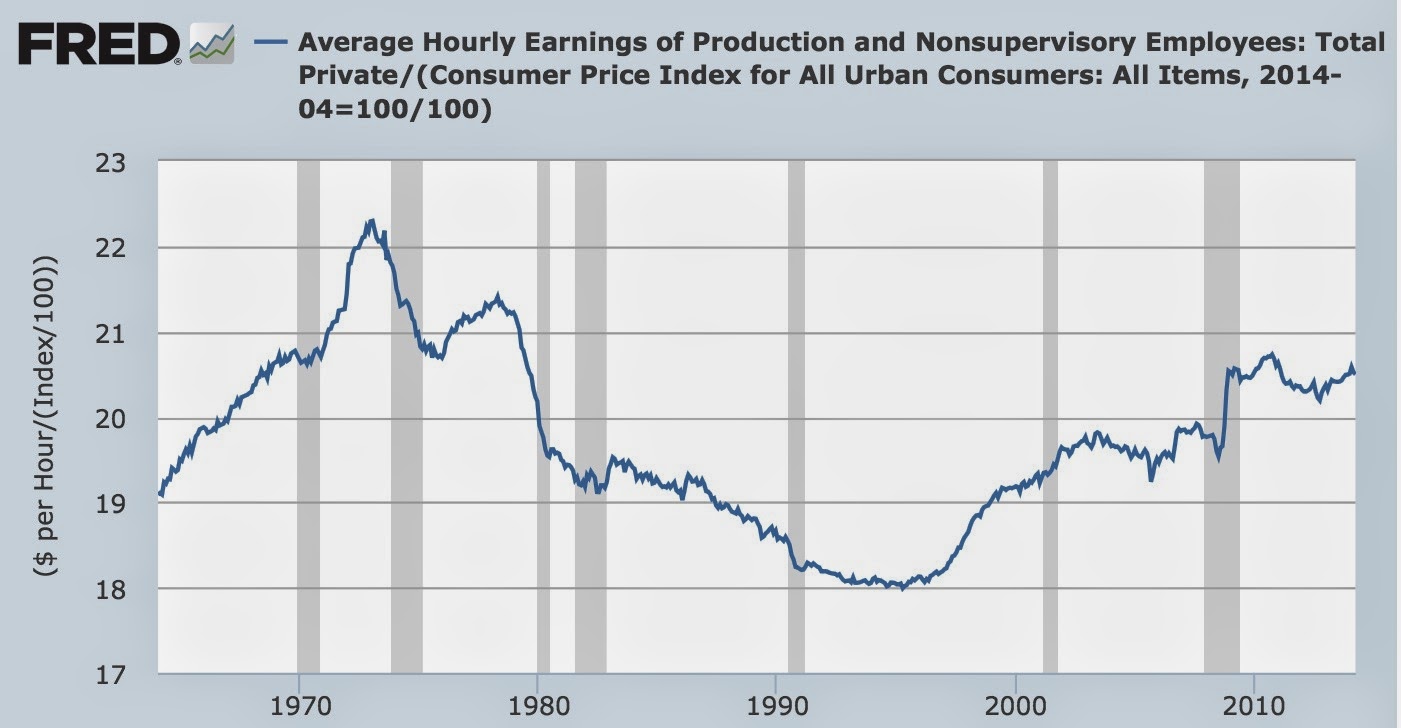 You can see that real wages peaked in the 1970s, and made a partial comeback in the 1990s tech boom.  The big increase in the last recession is when gas prices declined to $1.50 a gallon, and we actually had significant YoY deflation.

This second graph of the same data zooms in on the last 5 years, and indexes to the recent "real" peak in October 2010: 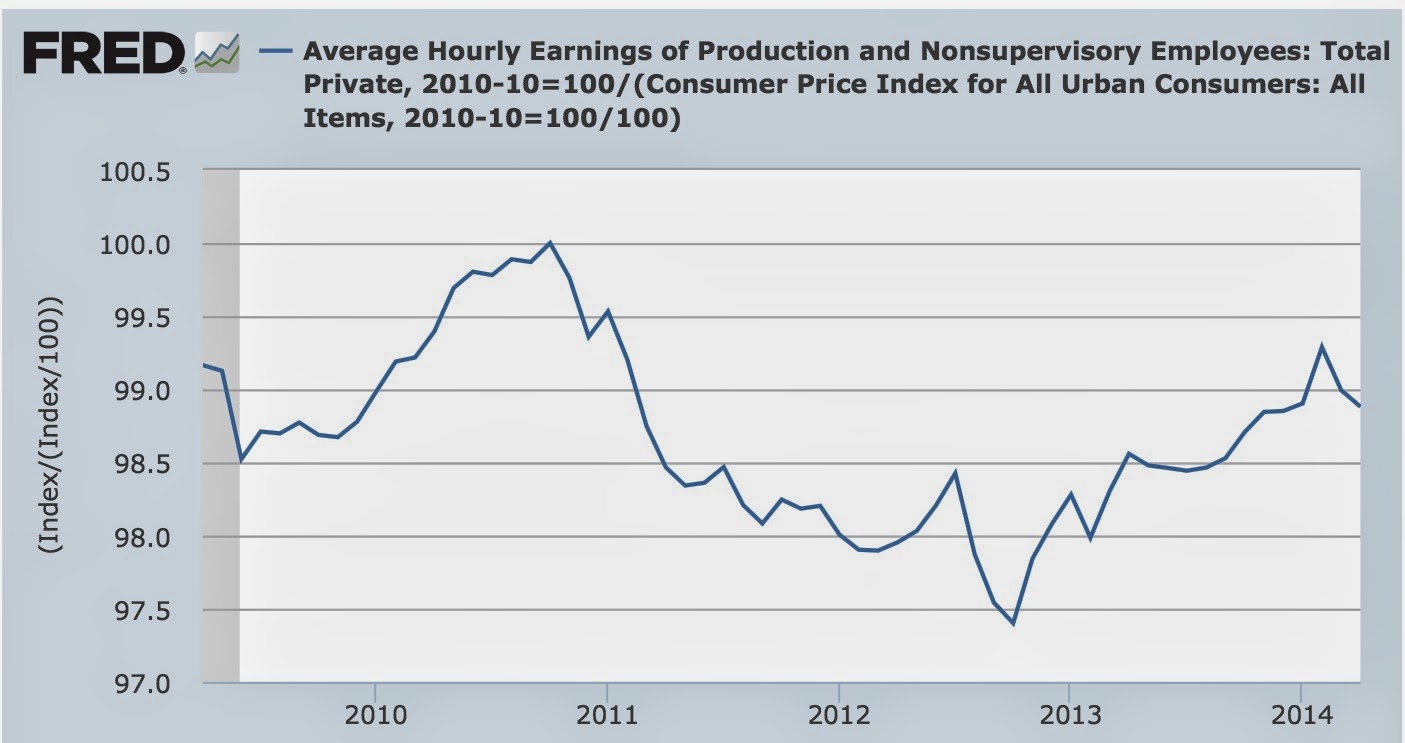 We're still about 1% below that peak.  Since inflation has been running in the 1.5% to 2% range recently, I want to see at least a $.04 per hour increase from last month's reading of $20.50.  That should be enough to overcome any inflation in the last month.  The trend in the last 18 months has been for a "real" increase of about .1% a month.  I would like to see that at least maintained, on track for a new high by midyear next year.

I will spotlight these three points, which will tell us if average Americans are making any progress in employment and wages, when Friday's report comes out.