Of corporate profits, progressives, and the business cycle

Yves Smith has a piece up at Naked Capitalism this morning on "why economists don't recommend real remedies" in which she says:

I hate criticizing writers whose work I generally like, but as a contrast to this talk, I suggest you look at a new post by Ed Lambert at Angry Bear. In it, a left-leaning blog (and remember, Angry Bear has been vigorous in its defense of Social Security), we see an strong argument against having workers get a better deal. Why? It will lower corporate profits, which will lower asset prices and give the confidence fairy a sad. I am not making that up. This shows the degree to which liberal economists have been intellectually captured by the orthodoxy and/or have been inculcated to live in fear of the Market Gods. If you can’t get parties who are ideologically sympathetic to argue for real remedies rather than a “recovery” only for the top tier, how can you possibly exert any pressure on the minions of the 1%?

Except Lambert isn't saying that labor's share of productivity should stay low.  To the contrary, Here's his concluding paragraph:

Profit rates just simply went too high and labor share went too low. Bringing these back into a sustainable balance will trigger an unstable financial situation, which would likely produce a recession.

Firms do not want to see their profit rates fall… even though their aggregate profit rates are very high already. If profit rates start to fall, asset prices will fall. This will have a cascading effect to investment and consumption. The problem is that asset prices are dependent upon very high profit rates which are based on a historically very low labor share. This situation is unsustainable. People are demanding higher wages because they are struggling terribly. Moreover, government assistance increases to make up for low wages. There are calls for higher taxes on capital.
Even if labor share rose and profit rates were to back down from 9% to a more sustainable 8% (which is still high historically), asset prices would fall and there would be a negative cascading effect upon the economy.

The simple fact is, as I pointed out last week in a post at XE.com

Corporate profits, particularly as adjusted by unit labor costs, are a long leading indicator for the economy,  They typically decline by at least one year before the overall economy does, and sometimes make their high near mid-cycle.
Unsurprisingly, given the rest of the GDP report, Q1 corporate profits, both unadjusted and as adjusted by unit labor costs, declined....

Corporate profits are a long leading indicator, typically turning down over a year before the next recession.  That is simply a fact, as originally shown in detail (pdf) by Prof. Geoffrey Moore, who was instrumental in establishing the index of Leading Economic Indicators and went on to co-found ECRI.

If you don't believe me, here is  Cris Sheridan at Financial Sense discussing the downturn in corporate profits in the first quarter:

If you do this for the 60 years of data and 8 complete business cycles shown in the chart [below], you’ll find that BEA’s measure of corporate profits peak on average over a year before the stock market peaks and over two years before the onset of an economic recession. 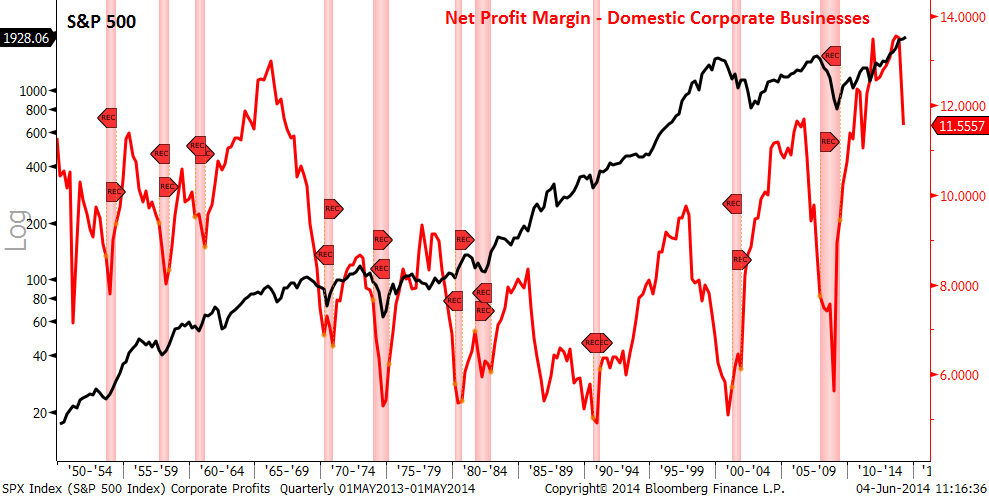 Recessions typically mean that millions of workers get laid off.  Does Yves Smith want that?

The question is, if there were a uniform increase in corporate taxes, would that operate the same as when forces naturally generated by the economy lead to a decrease in profits?  Typically, when faced with a sustained downturn in profits, companies start looking for ways to economize. This can include hiring freezes, and if the squeeze continues, layoffs. But what if every company, across the board, faced a uniform increase in taxation?  Would they react the same to that as to a decline in profits endogenous to the economy (since their relative share of profits compared with other companies would be the same)?

Like both Edward Lambert and Yves Smith, I believe that the Labor share of productivity is too low and must be raised.  So long as both profits and wages rise in tandem, we should get broad-scale growth.  At the same time, I know that a decrease in corporate profits typically has preceded a recession.

While I think Lambert is correct that stock prices would decline, as the "p" part of the P/E ratio would have declined, it is well to remember that the stock market has famously "predicted 9 of the last 4 recessions." In other words, an externally imposed, uniform decrease in profits, as opposed to an endogenous decline, might not create the "cascade effect on the economy" from asset price declines that Lambert fears. While a decrease in stock prices would create a negative wealth effect, the increase in consumer spending by Labor would likely more than make up for that (since Labor spends more of its income than the wealthy).  And another paradoxical result of the business cycle is that employment doesn't lead spending, it is consumer spending that leads jobs.

To test this, we need to examine past examples of the sequelae to increases in corporate profits.  Needless to say, those would be nearly non-existent after 1980. I'll poke around and if I find something worth following up on here, I'll post it.