The REAL "real unemployment rate" for May 2014

This month the usual suspects did not run any "real unemployment rate" articles, which assume there is no such thing as Boomers retiring in droves. Only the EPI updated its "missing workers" number based on estimates from a research paper published 7 years ago.

In fact, let me make a general announcement that will save you a lot of time reading useless or misleading analysis:  any time you see an article citing the employment to population ratio, or the civilian labor force participation rate, for the entire population, ignore it.  It's useless BS garbage. Retired Boomers are skewing both numbers drastically,  Both numbers are going to trend down for years, as Boomers move out of the labor force and into senior citizenship.

With that caution, let me update the "REAL real unemployment rate."

The monthly household jobs survey measures exactly this in a statistic called "not in labor force, want a job now."  Here's what that metric shows for the last 10 years: 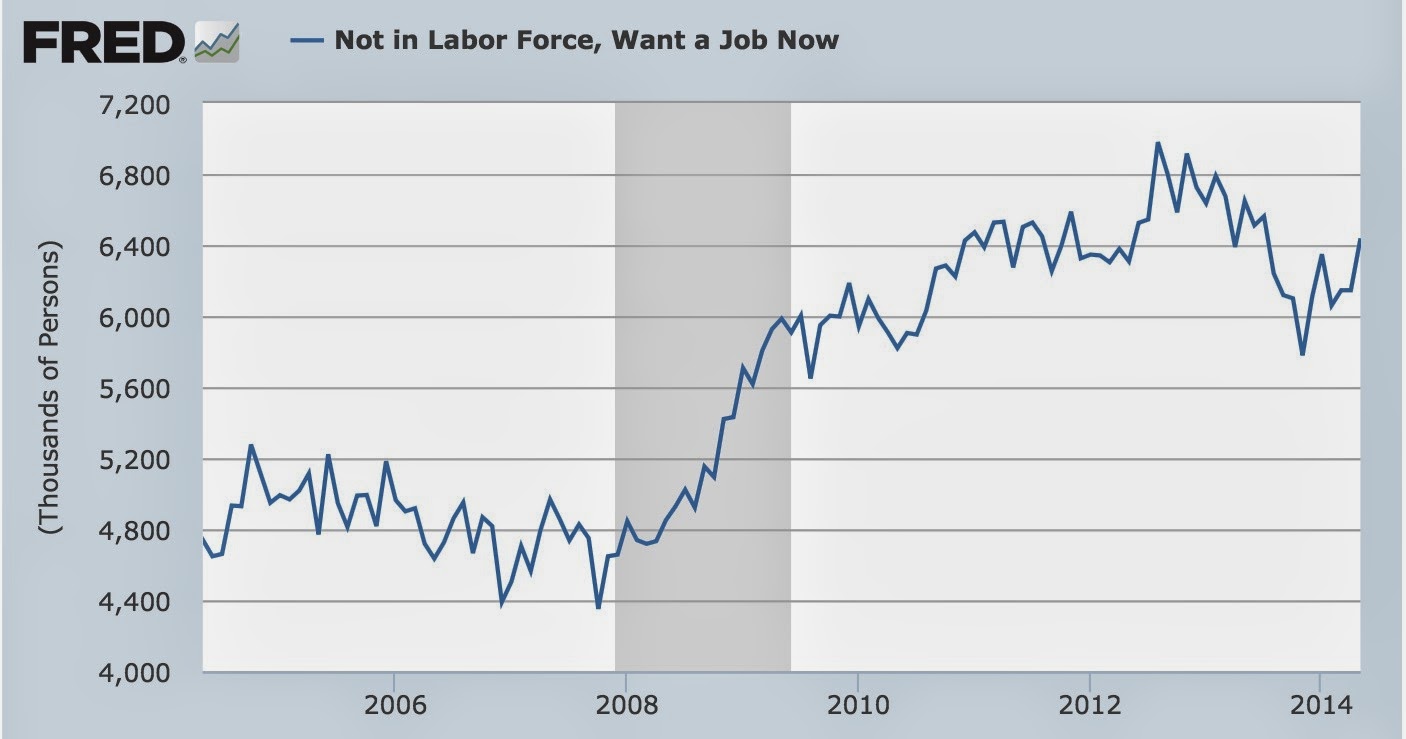 The number of discouraged workers rose by nearly 2,000,000 in the wake of the Great Recession. In 2012 and 2013, it declined by about 1/3 of that number.  Disturbingly, it has risen since the beginning of this year by over half a million.  This looks like a real trend.  I suspect it is fallout from the termination of long term unemployment benefits.  Supposedly this was going to spur those lazy moochers < /snark > to finally go out and find employment.  Instead, it looks like it has caused a fair number of  the long-term unemployed to simply give up hope.

In order to find out what the "real" unemployment rate is, including such discouraged workers, we simply add the number of people shown above to both the numerator (unemployed) and denominator (civilian labor force, which excludes those adults not interested in jobs, like retirees) of the statistics used for the unemployment rate.  Here's what that shows for the last 10 years: 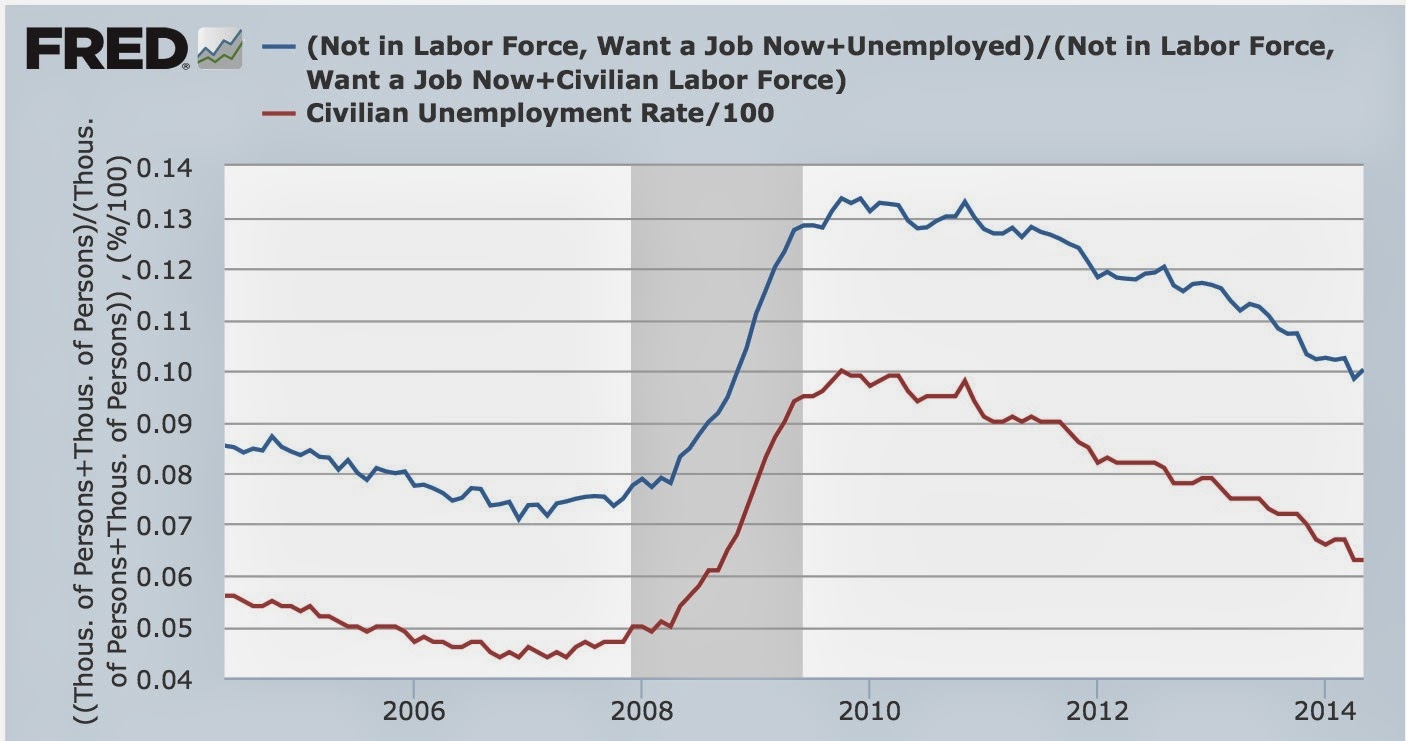 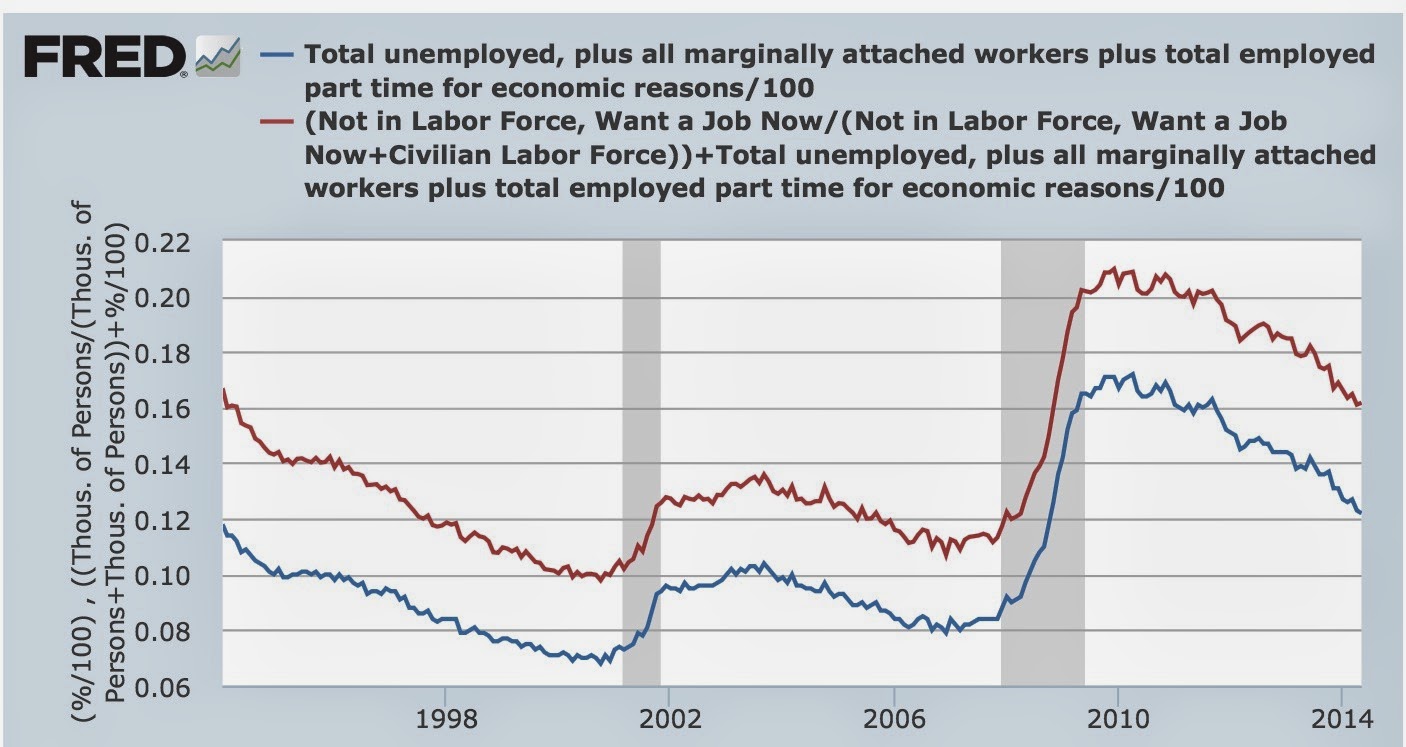 Back in March I wrote that The cutoff in unemployment wasn't just vile, it explained a lot of Q1 economic weakness.  Almost 1/3 of all of the people who affected in all of 2014 were cut off in January, and more have been cut off each month since.  It appears this is showing up in the "REAL real unemployment rate," even if not the official one.