By now you've probably all read at a bunch of blogs about how IRS data shows that Americans increased their borrowing from or cashed out their 401(k)'s in recent years, all of which feature these graphs: 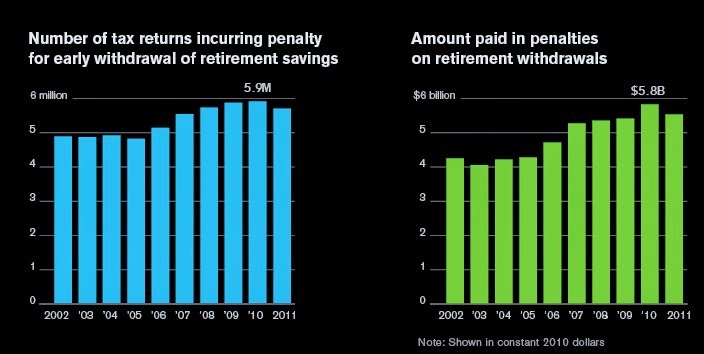 A truthful headline for these graphs would be "During and right after the Great Recession, Americans increasingly tapped their 401(k)'s."  While the original Bloomberg piece was fairly careful, some of the later iterations have sloppily or ambiguously used the present tense (see, e.g., Barry Ritholtz, “Tapping your 401(k)?”).

Which is simply not correct.  This data is in no way contemporaneous data. The most recent reading is THREE YEARS OLD. And the most recent, three-year-old, data, shows a significant improvement from the four-year- old data.

It’s also worth pointing out that the series isn’t population adjusted, which is a non-trvial difference, and the 38% increase in the number of IRS returns incurring the penatly is faiirly consistent to the ~60% increase in the unemployment rate from 6% to 10%.

What the graphs show is that those borrowing from or cashing out their 401(k)'s went up as unemployment went up, peaked about when unemployment peaked, and came down in 2011 as unemployment started to recede. We have absolutely no idea what has happened in the last 3 years, and furthermore it is a reasonable bet that 401(k)’s were raided less and less as the unemployment rate continued to go down.

All of this seems non-contoversial to me.    Which leads me to my next question:  would the alarm be the same if we still had a well functioning pension system for most people? 401(k)’s are basically “rainy day” funds where the target rainy day is retirement. Obviously we should expect that people who have emergencies are going to tap their rainy day funds. Is that by itself really a problem? – Or only because 401(k)’s have largely replaced rather than supplemented traditional pensions?

In my opinion the alarm shouldn’t be that people tapped into their 401(k)’s as the unemployment situation worsened. The alarm should be that 401(k)’s are a dismal (and to some extent intentional) failure as a replacement for the traditional pension. No company should be allowed to offer a 401(k) that does not include a substantial company match, or is in lieu of or bigger than its traditional or defined contribution pension, or is not as generous percentage-wise as its stock option or other incentive program for senior executives.