The "rental affordability crisis" is real, but it's about declining real wages, not a bubble in rents


Earlier this week there was a post at another site about the "rental affordability crisis."  Claiming there was a bubble in rents as well as housing, the writer called me out by link for my ridicule of Doomers who see a bubble every time a metric goes up.

HIs analysis of the issue was wrong.  The shame is, he highlighted a real, serious problem.  But in his zeal to find yet another bubble, he overlooked the real story, of how declining real wages in the two lowest quintiles have created real hardship for renters in that group.

Let's start with the fundamental mistake that the writer made. He wrote:

"Things are expected to continue getting worse, as rents will outpace the rate of inflation (not to mention incomes) for years to come."

In support of that assertion, he provided the following graph of median asking rents: 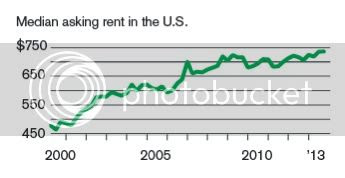 You can probably immediately see the problem, just by looking.  The huge increase in rents took place from 2000 through 2008. Rents have varied by only +/-5% since then.  And that's exactly what the data, compiled by the Census Bureau, shows.  The data series goes back to 1988, and below is a chart of nominal asking rents vs. median weekly wages, compiled by the BLS, showing that real rents declined in the 1990s as wages increased, then soared in the 2000 - 2008 period, and have been below that peak ever since:

The final column above shows "real" asking rents (rents deflated by the CPI), and indicates that rents haven't even kept up with inflation for the last 5 years (although they increased more than inflation in 2013).  There simply is no bubble in rents.

So what's the big deal?  The problem is that, while median wage earners aren't having a problem, the decrease in real wages in the bottom two quintiles is putting them in a real bind.

The Wharton School of the University of Pennsylvania's public policy brief that is the source of the "rental affordability crisis" information says:

According to data from the U.S. Census, half of all renters, and 83 percent of renters with incomes under $20,000, paid more than 30 percent of their incomes in rent in 2011.

....
[D]emand for rental apartments has grown and apartment construction has not kept pace. Between 2010 and 2013, the national apartment vacancy rate fell by half, from 8.0 percent to 4.3 percent,.....

...  [But i]ncome growth has failed to keep pace with rental growth over the last decade. At the national level, between 2000 and 2011, growth in REIS rent exceeded the growth in median renter income by the affordability rate to fall further.

Instead, the greatest decline in affordability has occurred amongst low-to-middle income households. [For example, i]n Atlanta, the share of households with incomes between $20,000 and $35,000 in year 2010 dollars who paid at least 30 percent of their incomes in rent rose from about 20 percent in 1980 to more than 80 percent in 2012....Even households in the $35,000 to $50,000 real income tier have experienced declining affordability rates, albeit not to the same degree....However, the highest income groups in the data – households making $50,000 or more in real terms—have experienced little decrease in affordability.

In other words, the problem isn't a bubble in rents. The problem is that even when rents have not kept pace with inflation, the income of the typical household that rents has experience a real decline.  The Harvard Joint Housing Center points out [pdf] that in 2010, 70% of all rental households had below the median of household income, and 40% of renters were in the in 25% of household income.

And what has happened to the bottom two quintiles of income earners?  They have fallen further behind the median and the upper 2 quintiles, as shown in this well-known graph of income by quintiles last updated by the Census Bureau in 2011: 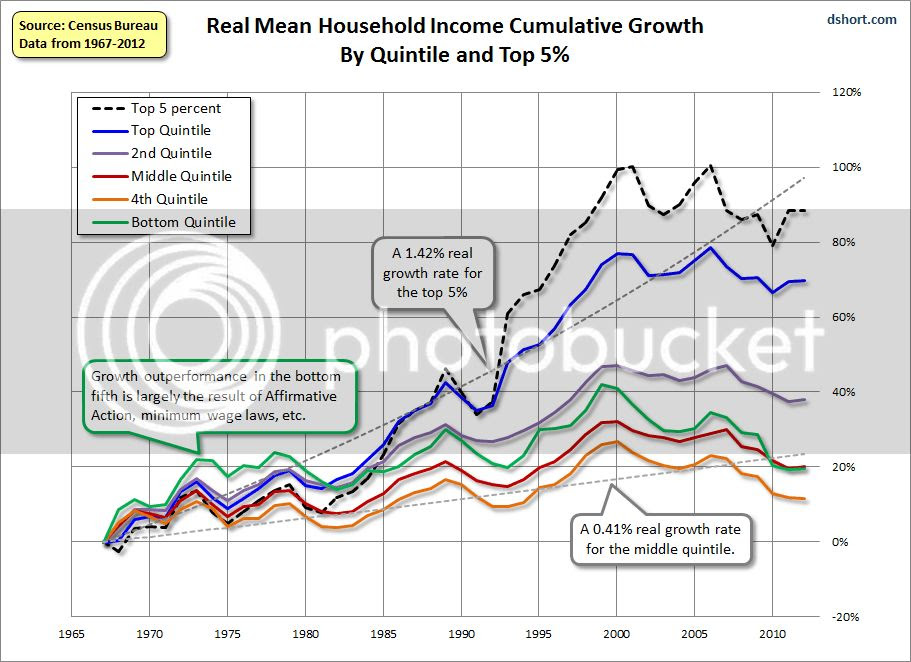 And as the Employment Law Project pointed out last June, since 2009 real incomes of the bottom two quintiles - and particularly the fourth quintile -- fell the most in real terms through 2012: 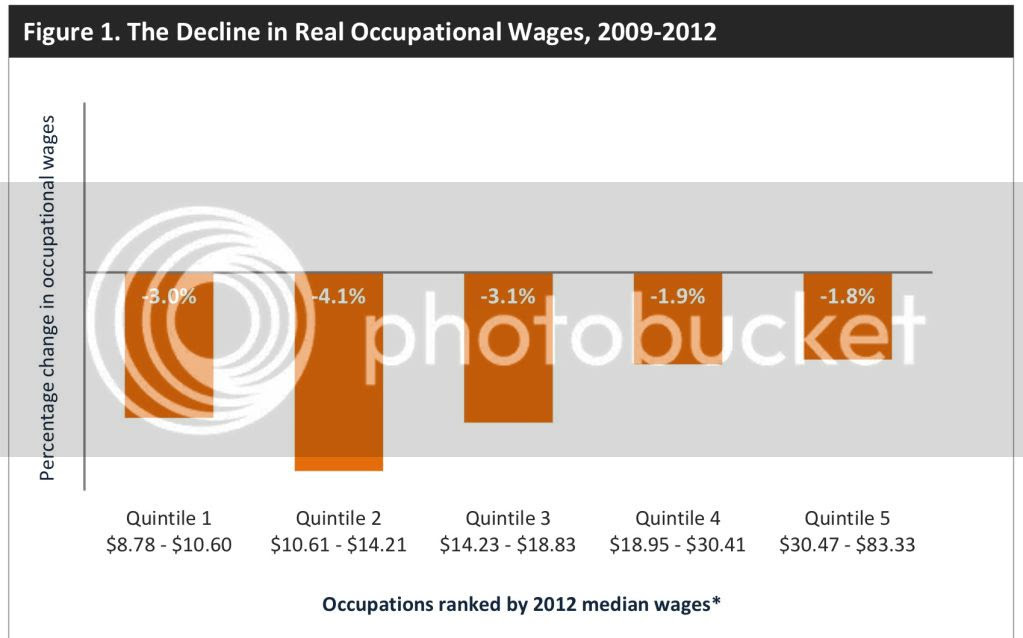 A recently released study by the Harvard Joint Center for Housing Studies noted that "Between 2000 and 2012, real median rents rose nationwide by 6%.  However, over the same time period, the real median income of renters fell by 13%."

In other words, even though rents have failed to keep up with inflation since 2008, and even if they have declined as to real median weekly wages since then, they have continued to increase in real terms compared with the falling real incomes of the bottom two quintiles who make up the typical renter household.  Rental prices have failed to go up more in the last several years not because of a lack of demand, but because higher rents are simply out of the reach of the typical renter.

It's a shame that the writer of that piece was so focused on the idea that there must be a bubble in rentals and housing that he completely overlooked this very real problem. It demonstrates in yet another way that falling real incomes among the lower middle class and working class are destroying the American dream.