There is no "falling rate of personal consumption growth"

Yesterday the blog "Capital Spectator" featured a post entitled Is the falling rate of personal consumption growth a new risk factor? featuring this graph of the YoY% change in real personal income: 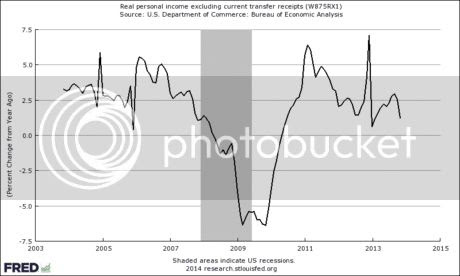 The blog is a good and respectable source of information, but in this case, I think they made a mistake.  The entire "decline" for 2013 is contained in last month's data, and there's a very good reason why that happened.

Here's a bar graph of the monthly percentage change for the very same data: 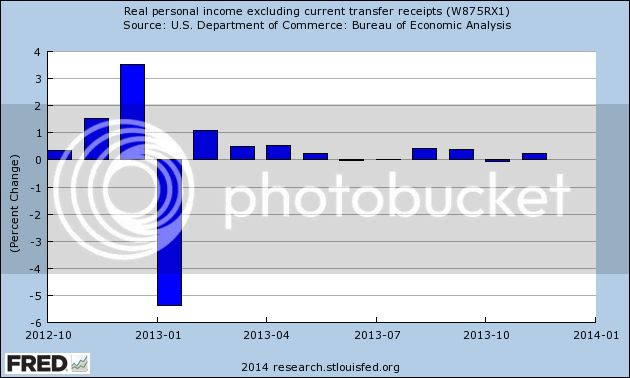 Notice the huge spike upward in November and December 2012, and similar spike downward in January 2013.  That's because of moving taxable income forward from 2012 to 2013 due to the higher tax rates that were anticipated due to the "fiscal cliff" expiration of the Bush tax cuts  at the end of 2012.

So the November 2013 - January 2014 YoY comparisons now will be between "regular" monthly changes now vs. the very volatile changes of one year ago.

When we back out the months of tax law timing, here is the YoY% comparisons we get: 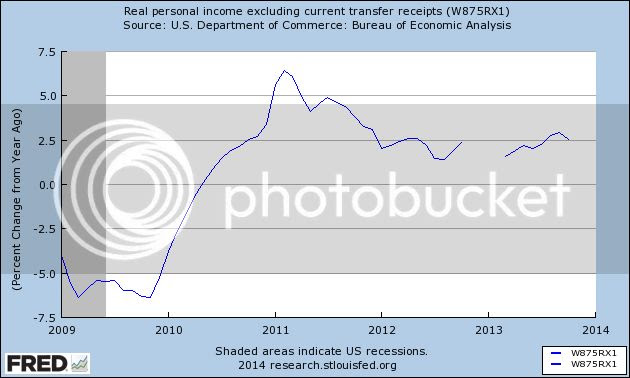 Flat.  There is no "falling rate of personal consumption growth."  Not that Zero Hedge won't have an article trumpeting the alleged downturn when the December comparisons come out at the end of this month.  Or that they won't be completely silent about YoY January comparisons too.