The Markit Eurozone PMI Composite Output Index fell to 47.3 in February from 48.6 in January, according to the flash estimate. The decline signals a steepening of the economic downturn, contrasting with the easing trend seen in the previous three months. Business activity has now declined throughout the past year-and-a-half, with the exception of a marginal increase in January last year.

Despite accelerating, the rate of contraction in February remained slower than the post-crisis record seen in October, and the average drop in activity in the first quarter so far is less severe than the trend for the fourth quarter of last year.

Let's take a look at the accompanying graphs: 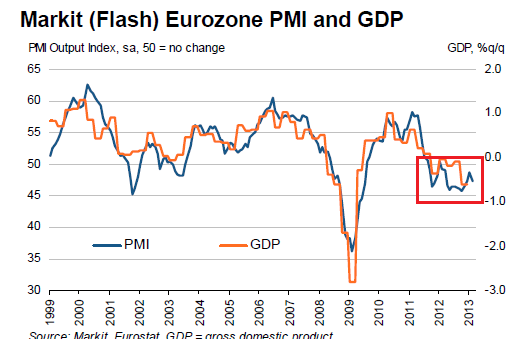 The chart above shows that the index has been below the 50 reading for about a year, indicating the EU region has had slumping growth for an extended period of time. 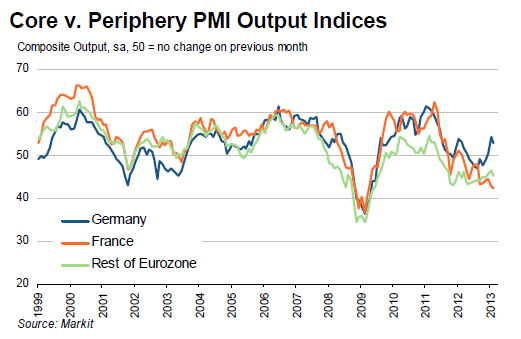 Note how the only country doing sell is Germany.  France is in terrible shape and the rest of the Eurozone is still printing numbers showing a contraction.

The German numbers from yesterday were good:

German private sector business activity increased for the third month running in February, largely supported by a robust expansion of service sector output. Adjusted for seasonal factors, the Markit Flash Germany Composite Output Index posted 52.7, down from 54.4 in January but comfortably above the 50.0 value that separates expansion from contraction. The latest reading was close to the long-run series average (53.0) and signalled a solid rise in overall business activity during February.

The French numbers in contrast were terrible, showing a worsening trend:

Latest Flash PMI data indicated that the downturn in French private sector output deepened in February. January’s Markit Flash France Composite Output Index, based on around 85% of normal monthly survey replies, slipped from 42.7 in January to 42.3, its lowest reading since March 2009.

The steeper fall in overall output was driven by an accelerated decline in the service sector, where activity contracted at the fastest pace in four years. Manufacturers signalled a slightly slower decrease in production compared with one month previously, albeit still sharper than signalled in the service sector.

The German economy suffered a setback towards the end of 2012. As the Federal Statistical Office (Destatis) already reported in its first release of 14 February 2013, the gross domestic product (GDP) decreased by 0.6% - upon price, seasonal and calendar adjustment - in the fourth quarter of 2012 compared with the previous quarter. The result for the entire year of 2012 remained unchanged at +0.7% (calendar-adjusted: +0.9%).

In a quarter-on-quarter comparison (adjusted for price, seasonal and calendar variations), positive contributions were made only by domestic final consumption expenditure. The final consumption expenditure of both households (+0.1%) and government (+0.4%) was slightly up. Gross fixed capital formation, however, decreased. For construction, it was slightly down on the third quarter of 2012 (–0.1%). Gross fixed capital formation in machinery and equipment decreased by 2.0% and thus has shown a downward trend for over a year now. For total domestic uses, however, a slight increase on the previous quarter was recorded (+0.2%).

Foreign trade, however, had a negative effect on the German economic development in the last quarter of 2012, according to the provisional calculations. Exports of goods and services were down 2.0% compared with the third quarter of 2012 (adjusted for price, seasonal and calendar variations). Although imports fell, too, the relevant decrease (–0.6%) was markedly smaller than for exports. Thus the balance of exports and imports had a negative effect on the GDP development in the reference period (–0.8 percentage points).

The bottom line is the all the "good news" coming out of Europe right now is projection; the ECB says growth will return in the 2H13, traders see the Markit manufacturing data as indicating a positive trend that is developing, etc...  A large majority of the hard data emerging from the region is negative.