The economy shambles along: is refinancing staving off recession?

Perhaps the best single article I've ever read about business cycles was the presentation by Professor Edward Leamer [pdf] of UCLA at the 2007 Jackson Hole conference. In that paper, Prof. Leamer showed that business cycles typically start with a turn in housing, followed by vehicles (consumer durables), then consumer nondurables (general retail sales), and then finally by commercial real estate. The order is the same for both recessions and recoveries.

In the last couple of months, hosuing permits and starts have made new multi-year highs. And just two days ago, we found out that car and light truck sales made a new post-recession high as well. How can that be if we are allegedly already in a new recession?

I get that because of misguided austerity policies in major trading partners manufacturing insofar as it is export-related might decline at least slightly. It is also no surprise that with the labor market having been so weak for so long, wage and salary increases are declining closer and closer to zero, a fact that should have official Washington's hair on fire with urgency, instead of creating phony fiscal crises.

But the fact is, even now, consumer spending does not seem to be faltering. In fact this week Gallup's daily consumer spending is once again touching new post-recession highs. It appears that, despite the recent decline in real income and wages, consumers are benefitting from the record decline in house prices that bottomed recently, and the ability to refinance debt at ever lower rates courtesy of quantitative easing and record low mortgage rates.

Let's go to the graphs. First, here is a graph of average wages divided by house prices, showing how the declilne in prices has made it easier and easier for a given wage to support the purchase of a house: 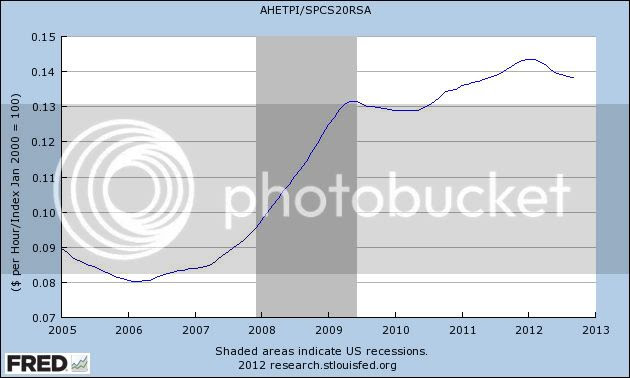 Here's the same graph using persoanl income rather than average wages. We get the same result: 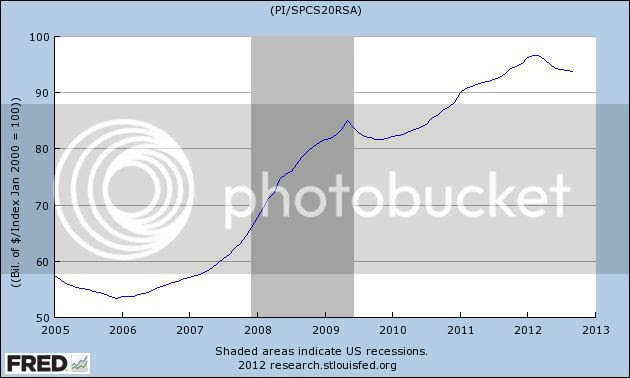 But that's not the end, because ever lower mortgage rates mean that even with declining real wages, more debt can safely be taken on, as shown by this graph that divides the result in the first graph above by mortgage interest rates: 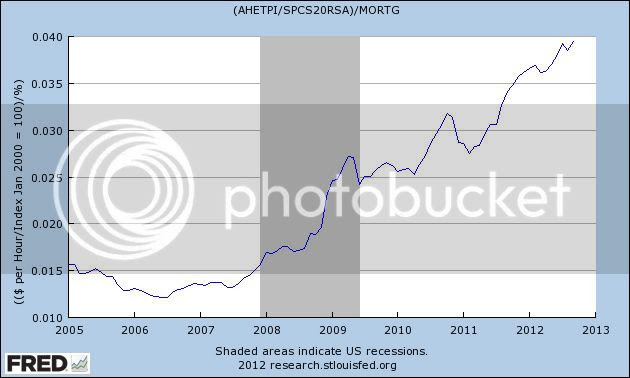 Again, we get the same result if we use personal income rather than average hourly wages: 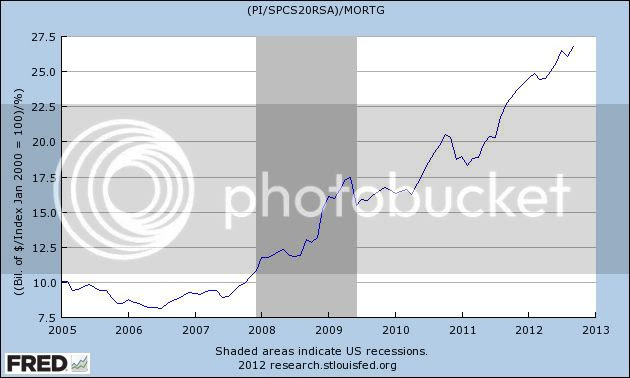 While Sandy no doubt impacted a few weeks of spending, which will show up in November's numbers as well as October's, real retail sales made a new high in September, and real manufacturing and trade sales are by my reckoning only 0.1% off their high earlier this year.

In other words, it appears that consumers' ability to buy houses and cars has been increasing, and that has been staving off any generalized significant decline in the economy.
Posted by New Deal democrat at 8:00:00 AM