The economy shambles along: PCE's vs. retail sales

Back in March I wrote that while personal consumption expenditures and retail sales spending tended to peak and trough at the same time, retail slaes are much more volatile than PCE's, with the result that, "as this graph below (subtracting YoY PCE growth from YoY real retail sales growth through 1997) shows, in a very specific and non-random way:" 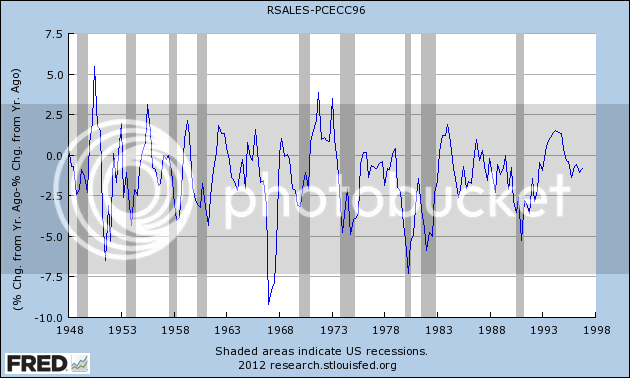 "Note that early in economic expansions, YoY real retail sales growth far outstrips YoY PCE growth. As the economy wanes into contraction, YoY real retail sales grow less and ultimately contract more than YoY PCE's. You can see that by noting that retail sales minus PCE's are always negative BEFORE the economy ever tips into recession. That's 11 of 11 times. Further, in 10 of those 11 times (1957 being the noteworthy exception), the number was not just negative, but was continuing to decline for a significant period before we tipped into recession. This makes perfect sense, as retail sales generally include many far more discretionary purchases. As the economy accelerates, consumers make more discretionary purchases. As it slows, the more discretionary retail purchases are the first things cut."

In March, YoY growth in PCE's exceeded that of retail sales - i.e., consistent with an economy that was expanding and was not close to recession. 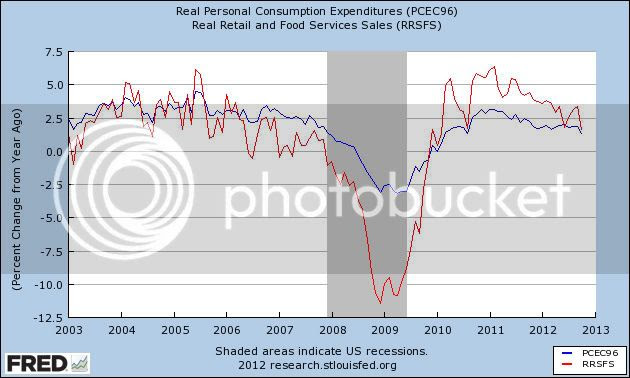 As you can see, the prelude to the 2008-09 recession folloeed the pattern set forth from earlier. By October, YoY spending was about equal. Here's a graph combining the two into a single line, subtracting YoY PCE spending from retail sales spending as in the first graph above: 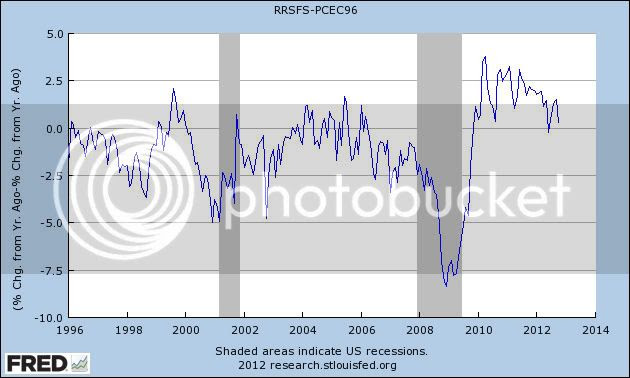 In summary, although the relationship is just barely positive, we still don't have the negative values we've seen prior to every single recession since World War 2.
Posted by New Deal democrat at 9:00:00 AM