The US Manufacturing Slowdown

Thanks to a recession in the EU and a slowdown in China, the US manufacturing is slowing down.  Let's first look at the macro-level numbers. 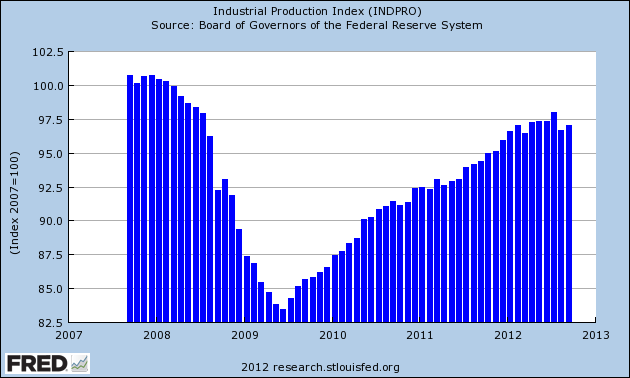 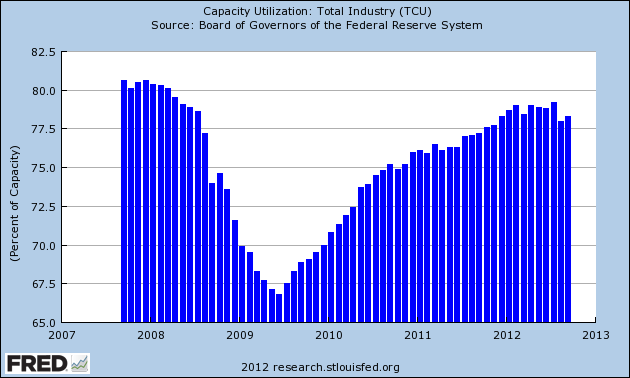 Overall industrial production (top chart) has stalled for the last nine months, while capacity utilization has done so over the last 10 months. 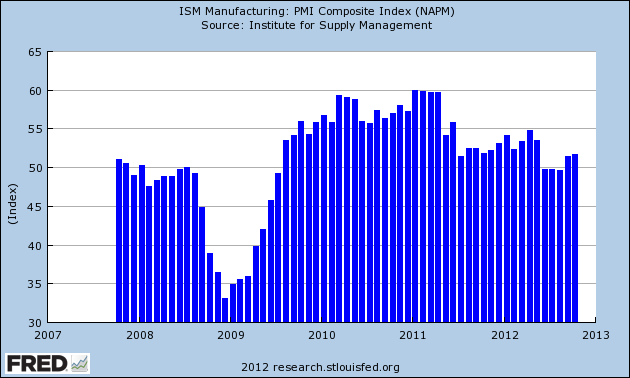 The latest ISM report shows two months about the 50 level, which is the line between expansion and contraction.  However, the internals of the report were not that great.  Consider that 8 of 18 industries were expanding while 8 were contraction and 2 were neutral.  Those are not the type of numbers that indicate strong growth.  Also consider the anecdotal information from the report:

"Market is still very soft." (Paper Products)
"Business is picking up." (Furniture & Related Products)
"[Our] 4th quarters usually begin to show a slowdown in demand, and this year is no different; prices are also dropping." (Wood Products)
"Demand down slightly due to customers pre-buying ahead of announced material price increases." (Plastics & Rubber Products)
"The slowing of capital expenditure in Europe and China has lowered our backlog for Q4." (Computer & Electronic Products)
"We see a general softening in the steel and automotive markets in the fourth quarter." (Fabricated Metal Products)
"Cuts in healthcare reimbursement rates continue to negatively affect top-line revenue." (Miscellaneous Manufacturing)
"Business conditions stable to slightly improving." (Transportation Equipment)
"Sales and order intake have slowed." (Primary Metals)
"Europe is still very much a concern. Global recovery is still fragile." (Chemical Products)

I've emboldened the negative comments, which comprises the majority of those listed.  Two deal specifically with international issues while others simply note a slowdown in orders. 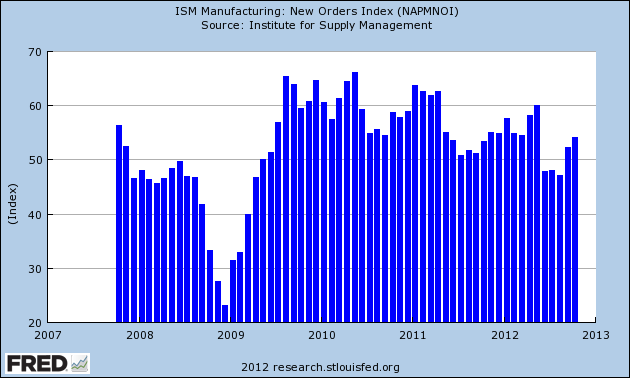 The new orders index as printed two months of positive numbers.  However, before that the chart shows three months of contraction, making the last five months pretty much a statistical wash. 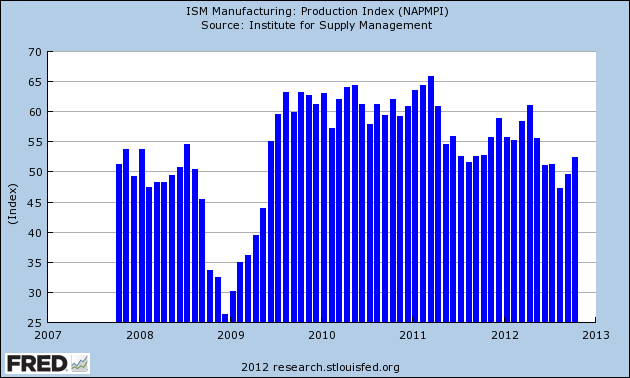 The overall production index printed a positive number in the last report, but that was the first number in three months.  And, like the new orders index, the overall level for the last five months is a statistical wash.

Also consider this information from the latest Beige Book:

Steel production was said to be flat in the Cleveland and San Francisco Districts, and lower in the St. Louis District. Activity related to machinery and equipment was reported as lower in the Philadelphia, Chicago, and Kansas City Districts. Weaker sales growth in the high tech industry was reported by Dallas, and Kansas City said that growth among high-tech firms remained sluggish in its District. The Boston District noted some weakness in the semiconductor industry, while the San Francisco District said that new orders from the semiconductor industry had improved. Manufacturing contacts in the St. Louis District were tentative about the outlook for 2013, and contacts in the Dallas District noted some uncertainty about the outlook due to the upcoming election.