Last week, I summed up the economic expansion that occurred between October 1949 and July of 1953. As a transition into the next expansion, let's look at the recession of July 1953-May 1954 to get an idea for what happened.  The following is from the economic report to the president of 1954.


In looking at the preceding paragraph, it's best to think of the economy as an overall system.  Remember -- the US was far more oriented towards manufacturing/blue collar industries during this time with about 40% of the labor force devoted to manufacturing or construction.  As a result, the steel strike put a crimp in the entire economy.  In addition, remember that this was before the "just in time" inventory management systems used today; instead, people purchased larger amounts of raw material and held them on hand.  So, when the strike was over, steel consumers felt the need to greatly replenish depleted inventories.  This led to a bigger set of purchases of steel after the strike, which led to increases in wages, which then led to an increase in consumer demand.

Here are the charts referred to above: 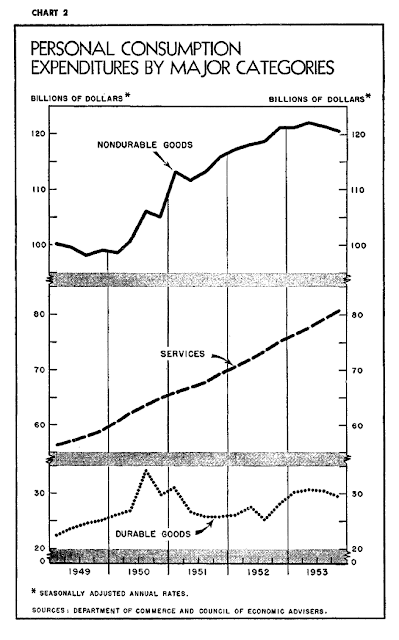 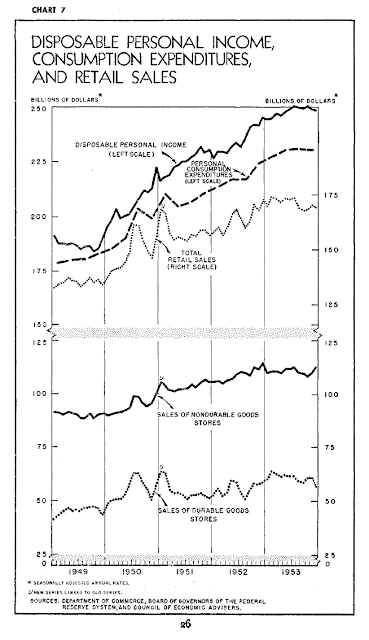 By the beginning of 1953, inventories had been restocked.  In addition, consumers slowed their purchases of steel made goods and turned more toward services.  As a result, businesses that had been buying steel in larger amounts to replenish lowered stocks no longer needed to purchase in the same big amounts.  In addition, demand for steel made goods slackened, further depressing economic activity.  As a result, the economy slowed.

As demand slowed, manufacturing production of durable goods and the raw materials that flow into them had to slow.  This led to lay-offs, which lowered income, which slowed demand, leading to the slowdown.