Morning Market Analysis: Don't Be Surprised To See a Correction

Last week was the first time in a few weeks when equities had a negative return.  Therefore, we need to see how bad the week was -- that is, we need to determine if this is simply a correction in the middle of a rally or a change of trend.

There is good and bad news in the performance of the individual sectors.  Technology, energy and consumer discretionary all rose last week.  However, financials, basic materials and industrials lost ground, taking some steam out of the rally.  However, utilities and health care also fell last week, so we didn't see a complete shift into defensive sectors.


Let's take a look at some of the charts. 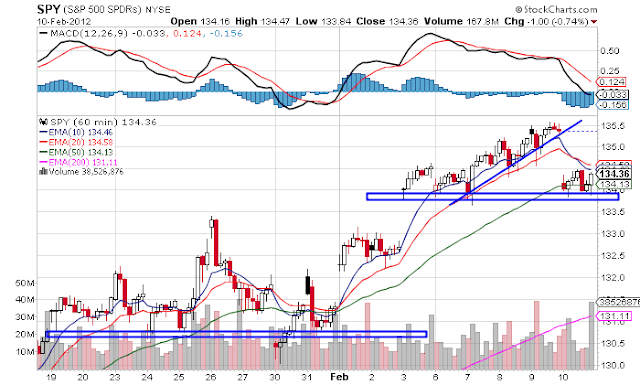 The SPYs broke a small, three day rally that started on February 7.  However, we see there is support a bit below the 134 level, which held during the sell-off. 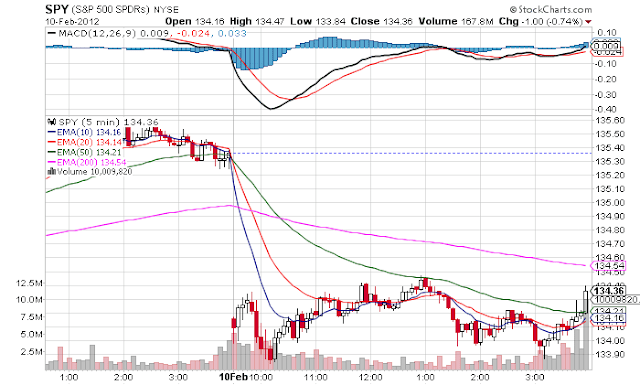 The SPYs five minute chart shows that after falling, prices moved in a very narrow range.  They also had a small rally at the end of the day on rising volume, telling us that some traders didn't mind holding positions overnight -- a good sign. 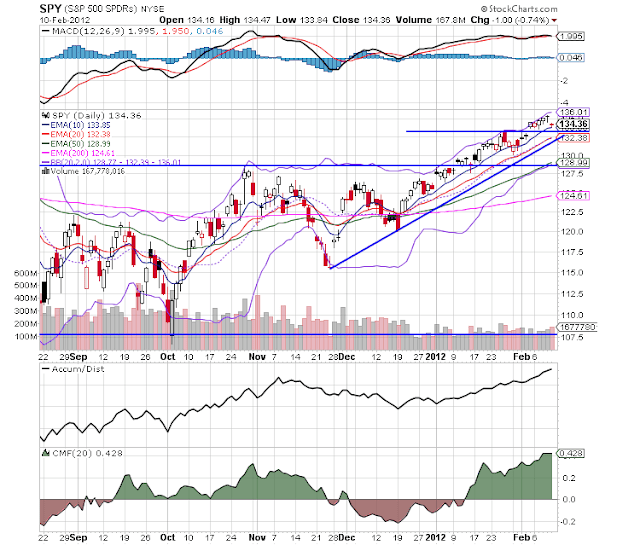 The SPYs daily chart shows that prices are at this time correcting, as several important trend lines and support levels have not been violated.  However, notice the MACD is starting to weaken and in fact is about to give a sell signal. 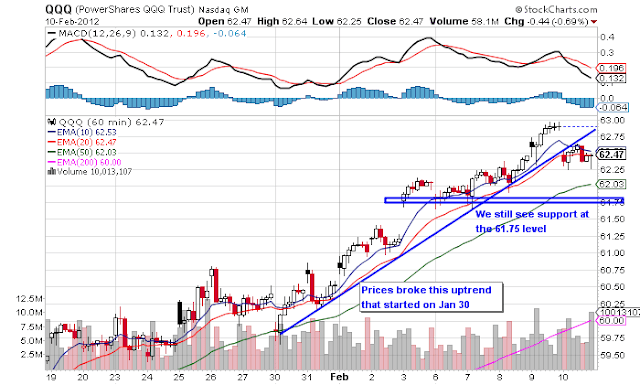 The 60 minutes QQQ chart shows that prices broke a trend that started in late January.  However, the support that exists around the 61.75 level is still in play. 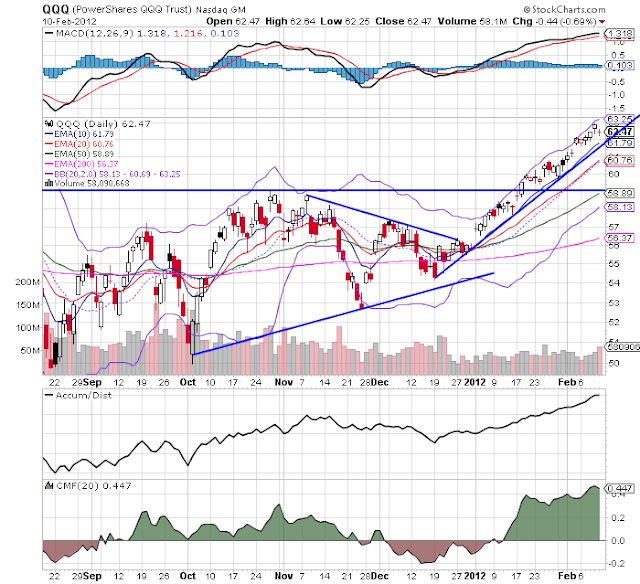 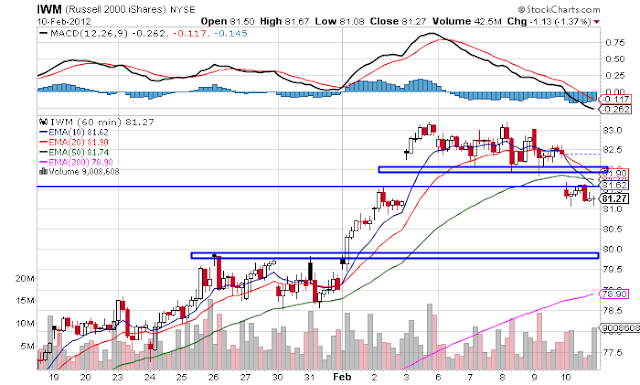 The IWMs (Russell 2000) is where we see the most technical damage.  Prices have moved through two support levels, with the next logical price target at around 80. 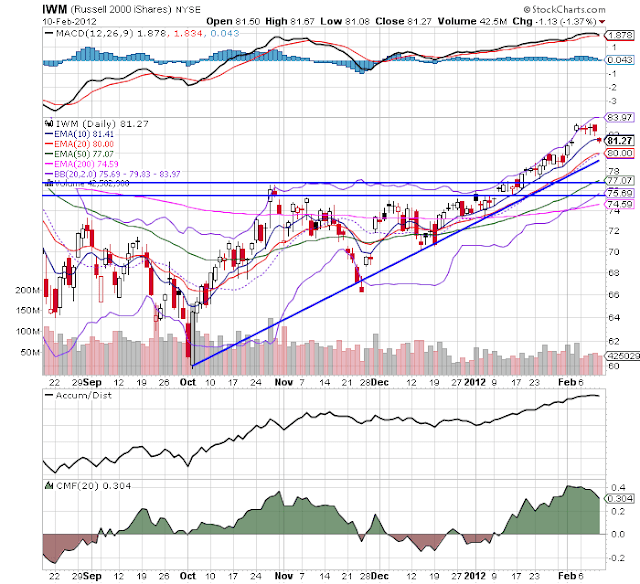 The IWM daily chart shows the uptrend is still intact.  However, the MACD is close to giving a sell signal, indicating that, at minimum a correction is about to occur. 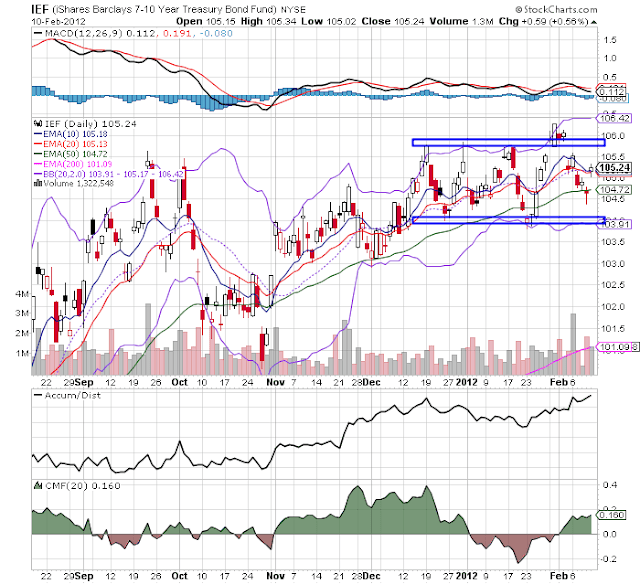 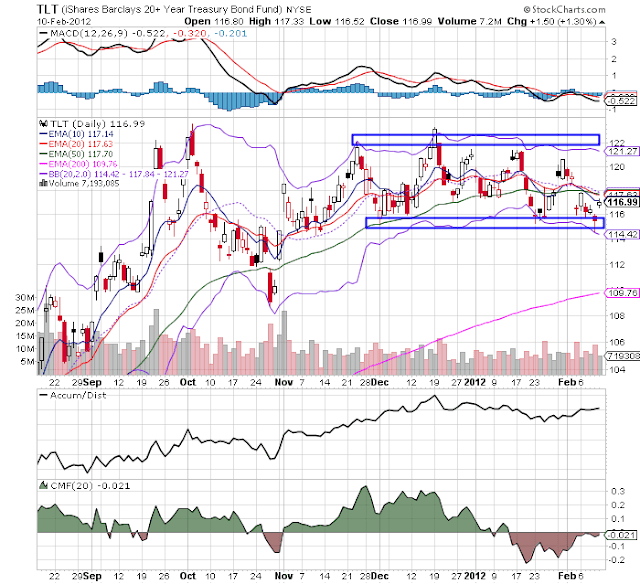 The treasury market is still in the middle of a trading range, so we still can't expect an increased influx into the equity market from the treasury safety trade going off. 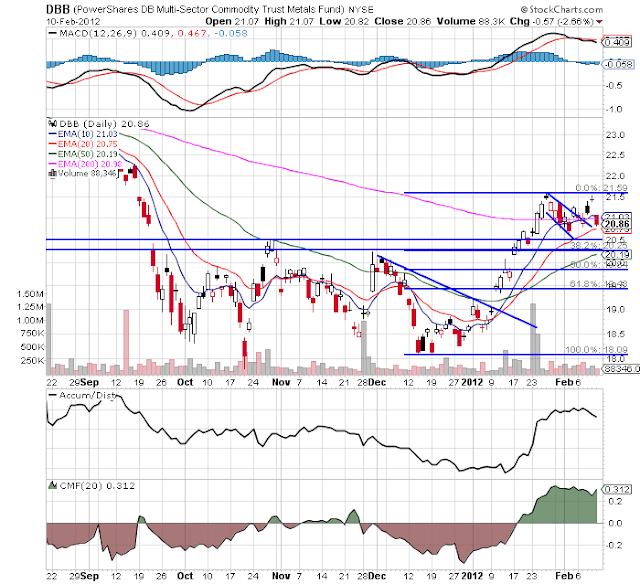 Industrial metals are just above the 200 day EMA and have been holding there for about two weeks.  Also note the MACD is moving lower and the 10 day EMA's rate of ascent is lessening.  I wouldn't be surprised to see this security move a bit lower, possibly to levels established in late October or late November.  Also note how the November price level is close to important Fibonacci levels.

Given last week's equity correction, the lack of a major treasury sell-off and the weakening position of industrial metals, I would be surprised to see a sideways consolidation this week.  In addition, as of this writing, the internal situation in Greece is deteriorating rapidly, which would be a net negative for the equity markets.