Prepare for less than 8% unemployment

As I've pointed out a number of times, the initial jobless claims rate, i.e., the percentage of the population filing for first time unemployment, has for 50 years (as long as the statistic has been reported) had a leading, and a tightly fitting relationship to the unemployment rate.

Here's how these two statistics stand as of yesterday's initial claims report: 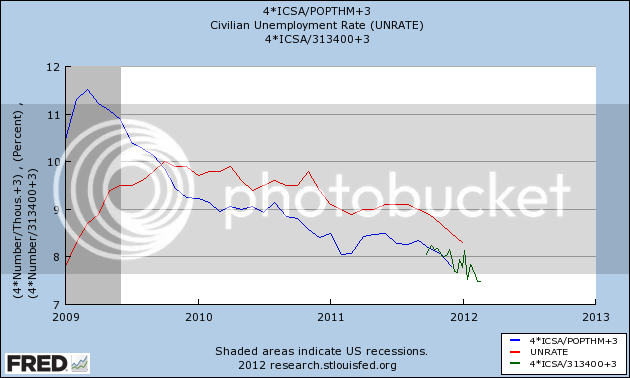 [Note: since the population series hasn't been updated since December, but has been growing by just under 200,000 a month, I added 300,000 to average January and February and then divided the most recent weekly claims by that number, in green].

Further, as I said yesterday, if the relationship between initial claims and payrolls in this recovery holds (a 27,500 gain in monthly payrolls for every 10,000 decline in the monthly average of initial claims), I expect February payrolls to be somewhere in the vicinity of +290,000, although there is enormous variability (+/-75,000) around the trend.
Posted by New Deal democrat at 12:15:00 PM