The 5-minute charts clearly shows prices consolidating and then breaking support at the 123 level.  Prices are now moving lower in a downward sloping channel.

When trading patterns -- like this topping triangle pattern -- the general rule of thumb is to measure the height of the pattern and the subtract or add that to the break-out point to get a price target.  Here, the height is roughly 7 points (122-129), so our price target is in the 117 range.

I've added some of the technical indicators to the graph to show that overall, volume is weakening and the MACD is showing declining momentum, as well as giving a sell signal.  In short, the weight of the evidence is clearly in the "market moving lower" camp.  This jibes with the overall fundamental situation, which is also equity negative. 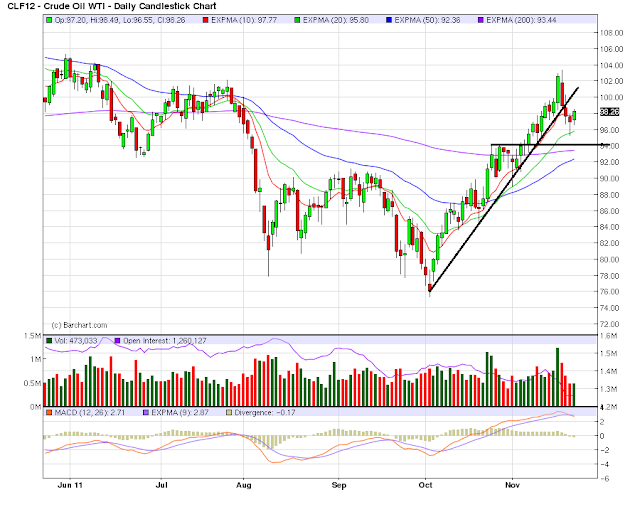 Oil has broken through its upward sloping trend line and is now trading around the 10 day EMA.  While the EMA picture is still bullish, the 10 day EMA is now moving sideways, telling us the shorter trend is weakening.  Also note the MACD has given a sell signal.  The next level of support is around the 200 day EMA, where we also have previously established price levels. 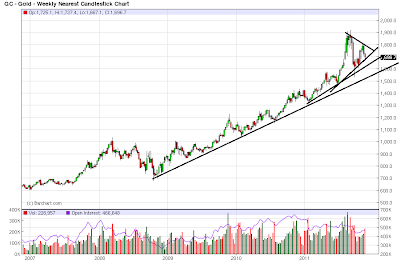 Gold is still in the middle of a multi-year rally, with several trend lines currently supporting prices. However, notice that prices may be forming a topping pattern right now, indicating the rally may be over. 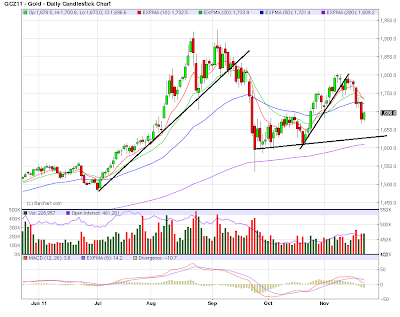 Supporting that view is the current 6-month daily chart,  Notice there are two failed rallies, with the second topping below the first.  Also note the weakening EMA picture, with the EMAs unable to show maintain a strong rally posture.