Where Are We Creating Jobs? Pt. III

Let's continue our look at where the jobs are being created by looking at additional areas of the service sector. 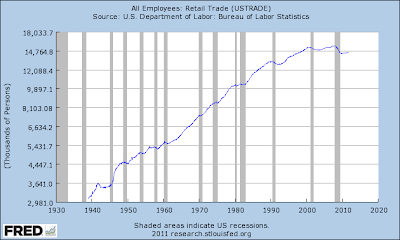 The long-term retail services chart in Log scale shows that employment in this area of the economy began topping out at the end of the 1990s.  While the early 2000s expansion saw some increases, they were at a far slower rate.  And the job cuts at the end of the recession have not been "filled in." 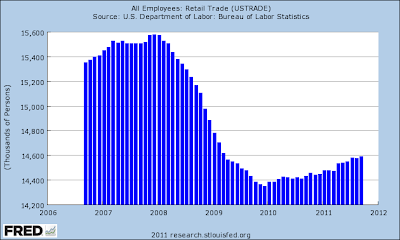 Above is a chart of retail employment, which comprises 16% of service sector jobs.  From peak to trough, this area of the economy lost 1.2 million jobs, but since the trough has added 243,000 jobs.  That means this part of the economy still has a hole of 1 million jobs to fill, assuming the previous peak is "full employment" in the retail area. 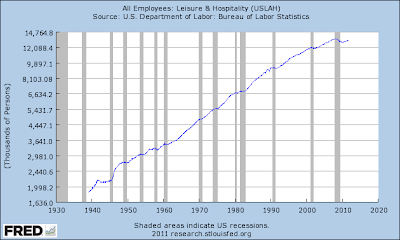 The long-term chart of leisure and hospitality employment is generally up, with the exception of the latest expansion.  Notice that the total number of jobs has dropped from its peak and has yet to retain that level. 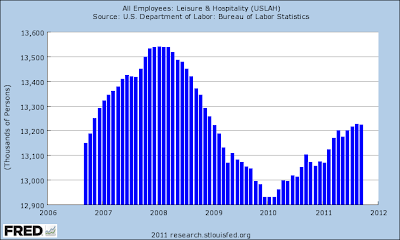 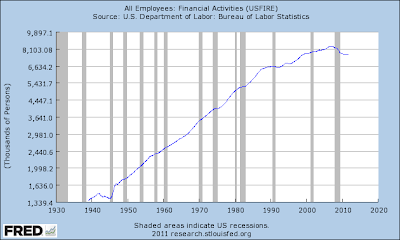 Financial jobs saw continued gains until this expansion, where there has been no employment growth. 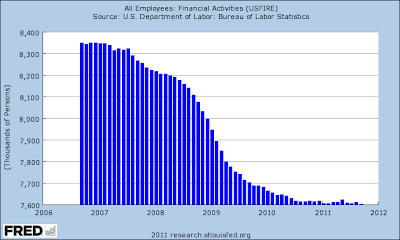 Above is a chart for total financial services, which shows an overall net loss with no gain.  In fact, the peak to trough includes a trough established in the last employment report.  The net result is this sector of the economy has lost 748,000 jobs in the last five years.

The above sectors of the job market account for 39% of the service sector jobs market.
Posted by Unknown at 8:30:00 AM