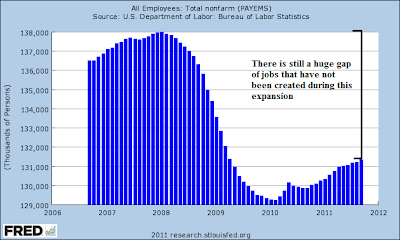 First, consider the above chart of total establishment jobs for the last five years.  There is an enormous gap of jobs that have still not come back.  In other words, there is a tremendous amount of labor market slack.  However, let's consider the reverse -- where have the jobs been created?  First, the lowest point of this cycle occurred in February 2010 when there were 129,246,000 jobs in the economy.  Since then -- and including the latest jobs report -- the economy has added a little over 2 million jobs.  But, when looking at the high point in jobs versus the low point in jobs over the last 5 years, the economy has lost 8.7 million.  So, most people will look at the above chart and notice we're in fact 6.7 million jobs behind.
Posted by Unknown at 8:30:00 AM