The Federal Reserve's report on household debt burdens was released Tuesday, covering the April - June quarter of 2011. According to the bank,

Both measures declined substantially yet again, as they have almost relentlessly since the end of 2007. Additionally, values beginning in 2008 were revised. This hasn't materially affected the peak values in 2007, but the decline since then is a little more pronounced. Here is typically where I would show you the snazzy updated graph, but the St. Louis FRED hasn't posted the updates yet, so here is the update from last quarter, with further explanation below: 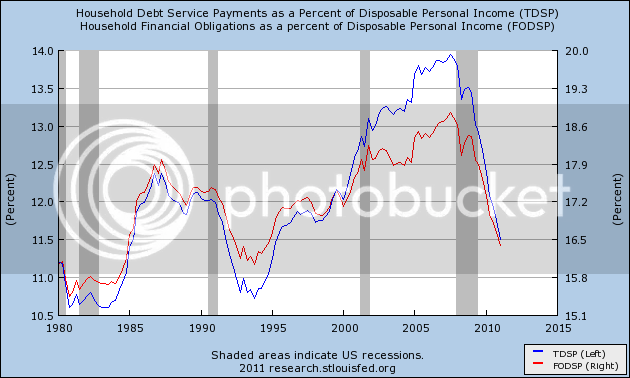 UPDATE: Many thanks to the St. Louis FRED for updating this data after I kvetched: 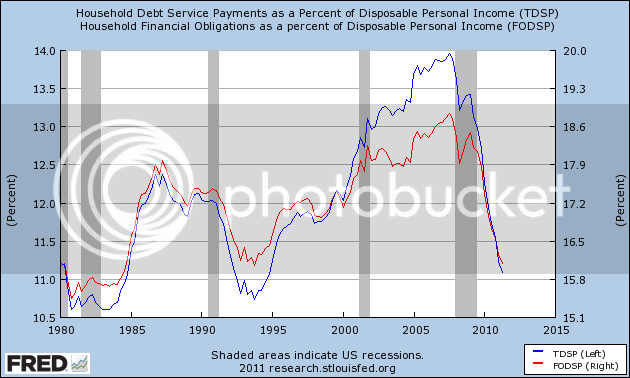 If this rate of decline continues, then by the end of this year, both of these will be near their all time lows, and may surpass them by next spring.

As I have pointed out previously, a lot of this reflects refinancing debt obligations at lower rates -- which is why the overall debt owed by American households has not contracted nearly so much as the percent of disposable income needed to pay it.

In the longer term, this is good for households, and good for a sustainable economic expansion. A week ago, I said we wouldn't see a longer term recovery until households had adequately deleveraged, housing prices had bottomed at least nominally, as well as new housing beginning to pick up, and the Oil choke collar broken. It looks more and more like 2 of those 3 conditions will be met by some time next year.
Posted by New Deal democrat at 12:30:00 PM