Can you get a recession if housing doesn't play along?

While it appears to me that in the last 30 days the economy may have actually contracted slightly, a short period of contraction doesn't necessarily lead to or mean that we have begun a recession. As I have said many times, simply projecting current coincident trends into the future is a common mistake, and an excellent way to be wrong.

I've also pointed out that one of the big reasons for the lackluster jobs and income recovery in the last two years has been that housing basically hasn't participated. Instead, the recovery was led by manufacturing and exporting - a sector that commands ever less a supply of human workers. The flip side of that issue is the question, can you have a meaningful contraction if housing remains flat? As Dean Baker has pointed out:

a recession requires some component of spending to go into reverse and turn negative. In the past, it had always been housing and car buying which fell at double-digit rates at the start of a downturn. With these categories of spending already very low, there are few obvious candidates.

And flat housing is. Let's look at the most important graphs: 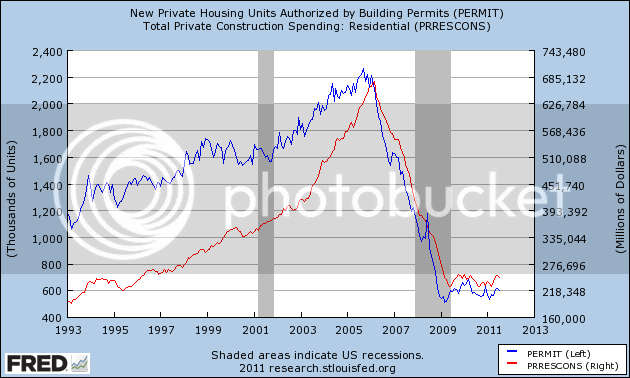 Both of these made a bottom in early 2009 and have moved generally sideways with perhaps a slight upward drift since. Housing permits have been over 600,000 on an annualized basis for the last 4 months straight - the first time since just before the expiration of the $8000 housing credit in early 2010.

It's also worth noting that permits went sideways with a small downward bias in the two years before the 2001 recession - a "just barely" recession that probably would not be labeled such except for the renewed decline due to the September terrorist attacks. 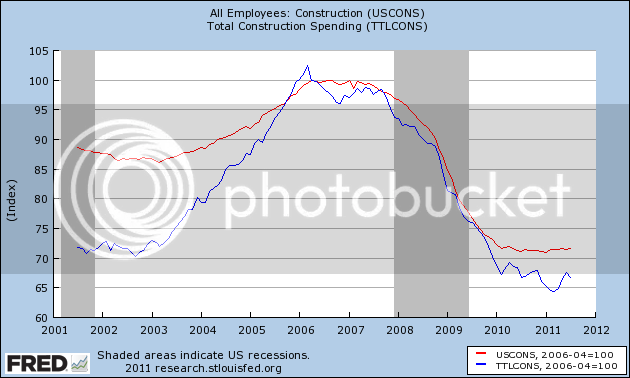 Note that construction employment has stabilized and even increased slightly. Total construction, including the lagging commercial sector, has also ticked up. This is best shown on the next graph, which tracks the YoY% change in the same data series: 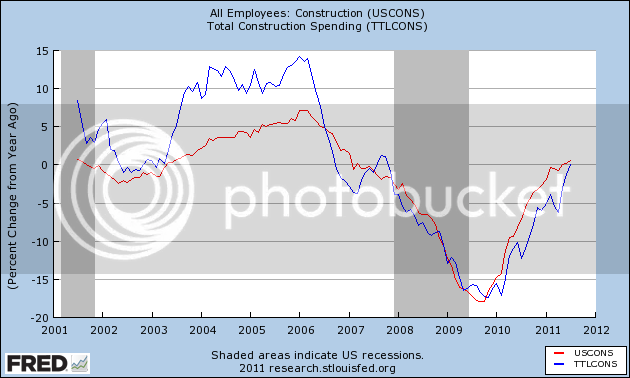 Both are finally showing no YoY declines (and remember that YoY comparisons lag turning points).

Finally, here are the 10 and 20 city Case-Shiller housing price series. Previously I have pointed out that in the last 6 months these have varied within an ~1% range. In the below graph, I have divided these prices by average hourly earnings: 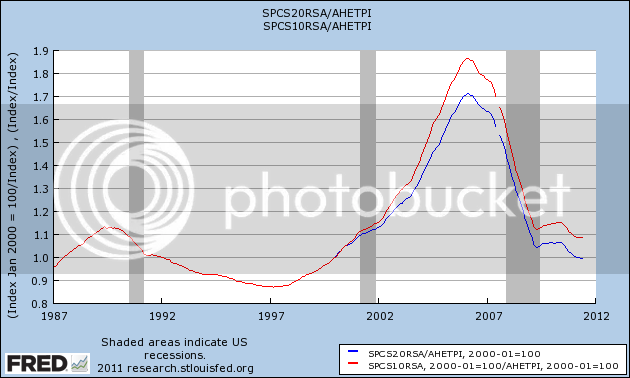 Note that the entire bubble in prices has disappeared. Note that while prices have gone sideways this year, measured by how much labor it takes to buy those houses they continue to get cheaper. Cheaper prices mean more demand.

To sum up: not all of these series are leading indicators, but permits certainly are -- and they lead by about 12 to 15 months. Housing permits have gone sideways for the last 2+ years, and the slight downturn at the end of the $8000 housing credit is 16 months ago and is therefore receding as a factor. Private construction spending and employment have stabilized. Home prices as a share of income earned continue to get cheaper, while nominally stabilizing (meaning no increased pressure on existing homeowners). [Bill McBride a/k/a Calculated Risk, made a related point yesterday. The unemployment rate correlates highly with housing starts, with a 12 to 18 month lag. With housing in the last year or so going sideways to slowly higher, it is unlikely that the unemployment rate will significantly worse even if we technically enter a recession.]

Housing isn't playing along with a recession scenario, and thus even though at the moment we seem to have entered slight contraction, it is very unlikely that it can be anything more than shallow.
Posted by New Deal democrat at 11:30:00 AM