Why the Budget Deal Will Hurt the Economy -- Perhaps Badly

For more thoughts on why the debt deal is probably bad news for the economy, see this post from yesterday.

The idea, in other words, is not about whether the government spends money better than individuals. After all, a lot of the policies advocated by the Keynesians, like the Making Work Pay tax cut, put money into the hands of individuals so that they can spend it. The idea is that the government has a role to play when, because of a “convulsive downturn,” a crisis begins feeding on itself.

Keynes — and others who later elaborated on his work, like Hyman Minsky — taught us that although markets are usually self-correcting, they occasionally enter destructive feedback loops in which a shock to, say, the financial system scares business and consumers so badly that they hoard money, which worsens the damage to the system, which further persuades other economic players to hoard, and so on and so forth.

In that situation, the role of the government is to break the cycle. Because businesses and consumers have stopped spending, the government breaks the cycle by spending. As clean as that theory is, it turned out to be a hard sell.

And that hoarding is exactly what is wrong with the current economy.

Let's back up a bit. The economy is a circular flow of funds between business and consumers. Business pays consumers wages which consumers then spend on goods and services. This is one of the reasons the GDP equation (which is C+I+X+G) contains the C and I variables. (C)onsumer spending shows us how one half of the equation is working and (I)nvestment shows us how much money business is spending. But what's important to this situation is there must be momentum -- that is, there must be money flowing from business to consumers at a certain pace.

However, what happens if the pace of transactions slows down? For example, suppose the entire financial system is on the verge of collapse -- like 1929 (and 1930 and 1931) and 2008. What happens then? People become scared so they start hoarding money. This in turn leads to a slowing economy as the velocity of transactions starts to slow. Now, let's add a perpetually high unemployment rate to the equation, where people are continually concerned they won't have a job next month. This increases the propensity to slow consumption as people start to build their personal stash for what they perceive to be their coming layoff.

And this slowdown and increased hoarding is exactly where we are right now. There is some economic velocity -- but very little. Hence the slow GDP readings we've gotten for the last two quarters. In addition, we can see the lack of velocity in three economic statistics: person savings, business cash balances and monetary velocity. 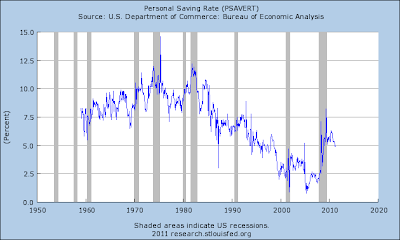 The personal savings rate is a double edged sword. In the current environment it is both good -- because it indicates that people are delaying consumption, providing a cushion for the future and paying down debt -- and bad, because it indicates people are slowing their consumption -- which we've seen in the low year over year PCEs of this expansion. When PCEs account for 70% of economic growth, you need consumers to spend. 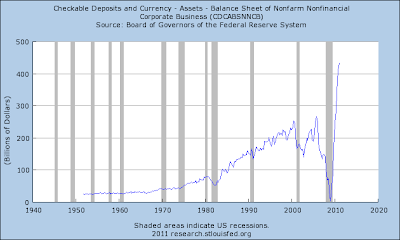 The above chart of checkable accounts and currency for non-financial corporate business shows that businesses have massive amounts of cash on hand. A fair amount of the gradual increase over the last 50 years is the natural increase in money supply that occurs as the economy has grown in actual size. But notice the massive, disproportionate spike that occurred after the end of the last recession. That tells us that businesses are also hoarding cash.

Finally, consider the following charts of money velocity for M1, M2 and MZM: 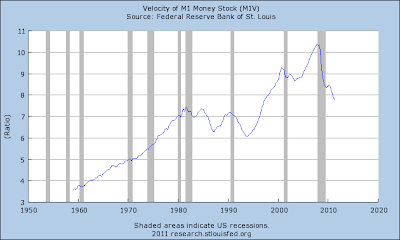 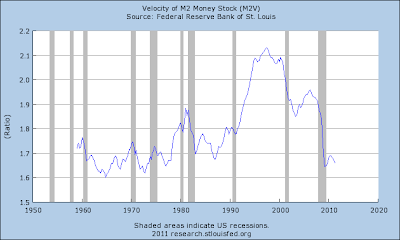 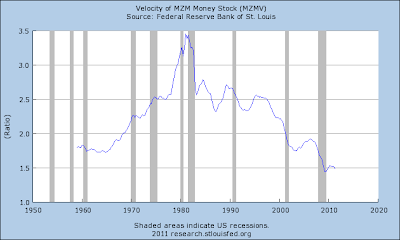 Money velocity shows the speed at which money is moving through the economy. M1 has been declining since the beginning of the recession and M2 and MZM are near historical lows. That tells us there is literally no movement of money through the economy, indicating the volume of transactions is very slow.

So sum up the current situation, businesses and individuals are hoarding cash - meaning they aren't spending it. We also see that from the incredibly low monetary velocity, which tells us the pace of transactions is incredibly low.

Hence, we need an actor to increase the economic velocity, which is where Keynes comes in. He argued that in times when there is massive hoarding (such as now) the government can step into the shoes of previous economic actors and get funds flowing again. It can also increase spending on things like infrastructure which lowers unemployment and thereby gets people spending again. And yet -- at the exact time when the economy needs a jolt to start moving -- we've decided to take money off the table, to further decrease the velocity of transactions in the economy.

From an economic perspective, especially considering the very weak GDP prints of the last two quarters, the budget deal is literally the perfect wrong move to engage in.