Equity Week in Review and Preview of the Upcoming Week/Month

Last week, I wrote the following about the market:

There are two ways to look at the current market situation.

1.) The QQQs are making the first advance through important technical territory, to be soon followed by the other averages.

2.) The QQQs are rallying on average specific information, and the lack of confirmation from any of the other averages means the QQQs will be coming back down to a lower level.

Given the fundamental economic background, I think number two is by far the more likely analysis of the current situation.

In essence, the NASDAQ has rallied beyond resistance, but the other averages did not follow, which I believed indicated the QQQs were more likely to fall back through support. This turned out to be last week's market theme. However, the broader picture for the last few months is better illustrated in a P&F chart of the averages, which better shows the price action. 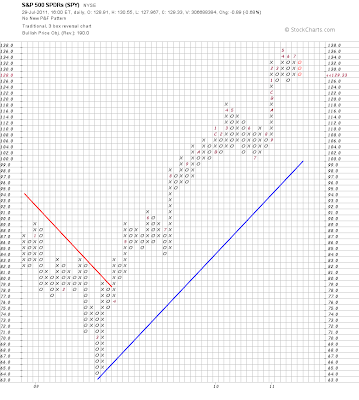 In April, May, June and July prices hit the 134 and 136 level, but fell back to lower levels. In addition, prices found technical support in the 126/128 areas. Put another way, the index has been trading in a 10 point range for the better part of 4-5 months. Sideways trading tells us several things.

1.) Traders are excited enough about the economy to push prices higher. but neither are they concerned enough to sell shares and more them lower.

2.) Right now, there is probably a fair amount of share turnover occurring, where traders who got into the market at lower levels are now selling their shares to take a profit and letting the new traders take new positions with the hope of higher market action.

3.) There is a big "wait and see" attitude in the market right now. 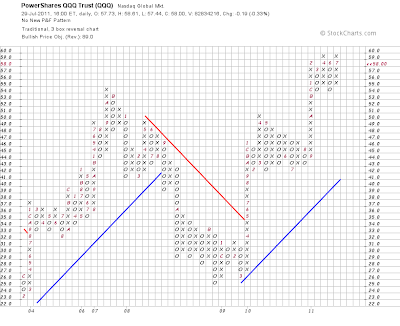 The QQQs show the exact same situation, except prices are moving between 54 and 59. 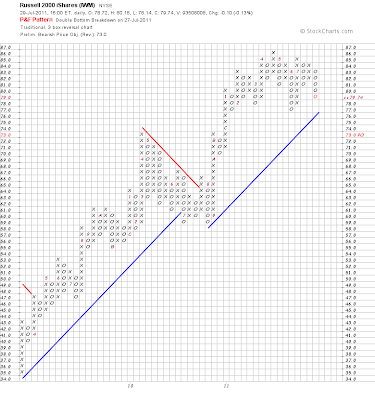 The IWMS show more volatility -- which is to be expected as this is a riskier average. But notice most of the volatility is to the down side. In addition, notice that, despite the volatility, prices are still trading in a pretty narrow range between 77 and 86.

When we pull back and look at the bigger picture, we see that all the major averages are trading in a price range, and have been doing so for between 4-6 months. This tells us that traders are "taking a breather." The sum total of the news is not sufficient to move the market higher nor lower. The good news is that there is still hope the current slowdown is temporary. However, the bad news is the market has little patience for poor performance.
Posted by Unknown at 4:40:00 PM