So -- why did the economy only produce 54,000 jobs last month? First, let's put the number into context:

We have to remember that this is just one month - even if the numbers were dismal. So far the economy has added 908,000 private sector jobs this year, or about 181 thousand per month. There have been 783,000 total non-farm jobs added this year or 157 thousand per month.

The unemployment rate is still unacceptably high and there is painfully little attention being paid to this problem from the position of policy makers. However, the overall trend is still decent, save for one month of data. However, back to the question: why the one month drop?

3.) We're in another period of economic uncertainty: in the EU, Greek concerns are again taking center stage. In the US, we have the budget issue in Washington. Now we have ratings agencies threatening to downgrade UIS debt (or, they're starting to think about downgrading US debt). Either way, this level of uncertainty freezes action. 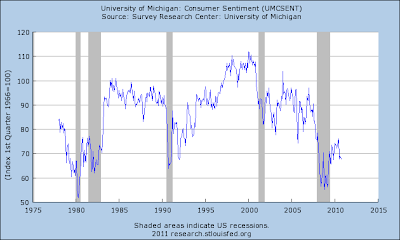 Consumer sentiment is already at low levels. The latest drop is seen more clearly in the following chart: 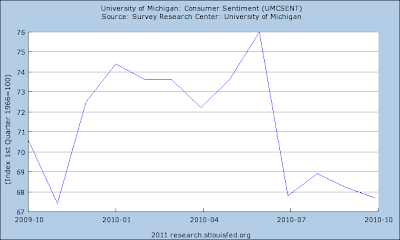 The drop a few months ago -- and the lack of any climb from that drop -- indicates consumers are not happy. And when that happens, they stop spending. We're already seeing signs of this in the latest GDP revisions and retail sales report. Decreasing sentiment means lower demand, which leads to businesses cutting back on production which leads to lower hiring numbers.
Posted by Unknown at 8:30:00 AM