One of the primary problems associated with high unemployment is poor wage growth. The underlying logic is simple: if an employer has a large pool of people to hire, people applying for a job (or those who already have jobs) won't be asking for raises. In fact, it's possible to argue that a high unemployment situation is in fact wage deflationary, because employers are able to ask for wage cuts. As a result of this macro environment, real disposable personal income has grown slowly during the recovery: 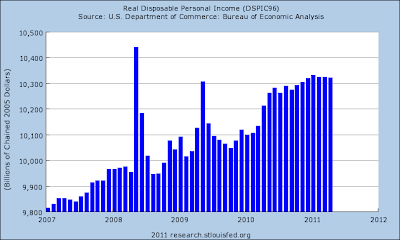 The one cushion consumers have is a higher savings rate: 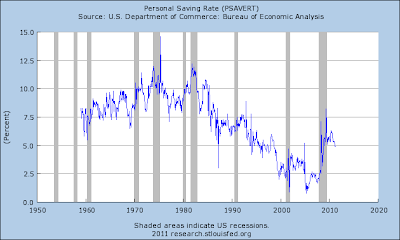 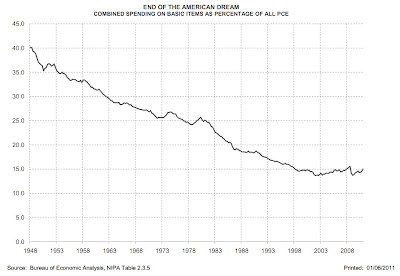 As explained by analyst John Kemp:

For most of the post-war period, declining real prices for clothing and especially food caused the relative amount spent on necessities to shrink. Spending on basic necessities other than shelter fell to a low of just 13.67 percent of all consumption expenditures in Q2 2002.

But since then spending on necessities has been on a rising trend, interrupted only briefly by the recession in 2008 and early 2009. In Q3 2008, spending had hit 15.6 percent. By Q1 2011 it was back to 15.0 percent and has almost certainly risen further in the last two months.

In the final quarter of 2005, American households started allocated a higher percentage of their consumption expenditure to food, clothing and fuel than they had five years earlier, the first time in over six decades. Since then, the percentage has continued to creep steadily higher.

I don't think this is the end of the American dream as stated on Kemp's chart. But I do think it means the US consumer is under pressure to make harder choices regarding expenditures, which will slightly depress spending. We saw this in last months PCEs expenditures from GDP.
Posted by Unknown at 8:30:00 AM