Is It About the Productivity -- Or is There Something More?

The United States is out of step with the rest of the world's richest industrialized nations: Its economy is growing faster than theirs but creating far fewer jobs.

The reason is U.S. workers have become so productive that it's harder for anyone without a job to get one.

Measured in growth, the American economy has outperformed those of Britain, France, Germany, Italy and Japan — every Group of 7 developed nation except Canada, according to The Associated Press' new Global Economy Tracker, a quarterly analysis of 22 countries representing more than 80 percent of global output.

Yet the U.S. job market remains the group's weakest. U.S. employment bottomed and started growing again a year ago, but there are still 5.4 percent fewer American jobs than in December 2007. That's a much sharper drop than in any other G-7 country. The U.S. had the G-7's highest unemployment rate as of December.

Canada and Germany have actually added jobs since the recession ended in June 2009.

U.S. companies aren't acting the way economists had expected them to.

In the past, when the U.S. economy fell into recession, companies typically cut jobs but often kept more than they needed. Some might have felt protective of their staffs. Or they didn't want to risk losing skilled employees they'd need once business rebounded.

Among manufacturers, for example, some tended to hoard workers during downturns by giving them make-work assignments — sweeping factory floors, counting inventory, painting warehouses.

The result is that productivity — output per workers — has typically decelerated or even dropped as the economy has weakened.

Japan and Europe have been following that script. At the depth of the recession in 2009, productivity shrank 3.7 percent in Japan and 2.2 percent in Europe.

The United States has proved the exception. U.S. productivity growth doubled from 2008 to 2009, then doubled again in 2010, according to the Organization for Economic Cooperation and Development.

Panicked by the 2008 financial crisis and deepening recession, U.S. employers cut jobs pitilessly. They slashed an average of 780,000 jobs a month in the January-March quarter of 2009.

"My sense is there was much more weeding out of the weakest workers — the ones they didn't want," says Harvard economist Kenneth Rogoff.

This is something I've been mulling over for some time -- with no clear idea on the answer. During the worst part of the recession, companies were laying off over 600,000 people/month. Eventually, the economy lost more or less all the jobs created during the previous expansion. A rate of attrition that large would lead to the conclusion that companies cut too many employees and would need to hire them back quickly (at least, that's the intuitive logic).

Yet the exact opposite has happened. The pace of job creation has been at best lackluster; it's almost as though the US has cut off 10% of its workforce. Those still employed are OK, but those who are not are essentially locked out from getting back in. I think the article -- which notes that productivity gains in the US have been very large -- explains a very important fundamental reason: if you can do more with less, why hire more?

Consider the following chart, which shows five years of productivity gains in the US: 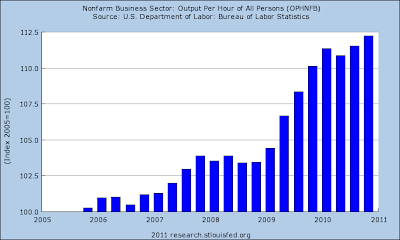 Notice the very large increase starting in 2009 -- increases which clearly outpaced the gains from 2006-2009. Despite the mass firings, the US became far more productive. In the above environment, businesses aren't in a position where they have to hire.

Let me add another wrinkle to this idea that I have not worked out in any detail. Consider this chart of the labor force participation rate: 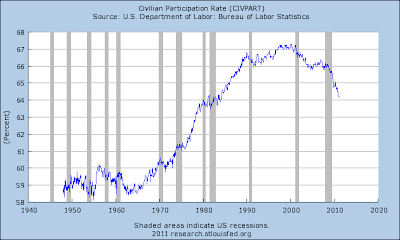 The participation rate measures "[t]he labor force as a percent of the civilian noninstitutional population." The chart above shows that number has been decreasing as the baby boomers start to retire. The boomer retirement has been a back story for some time; however, it's effect on employment decisions has not been measured that I know of. Now -- hypothetically -- let's assume that starting in roughly 2000 (or maybe earlier) those who were responsible for hiring decisions started to think to themselves, "with the upcoming baby boomer retirement coming, we need to be prepared for fewer job applicants. So, we need to be ready to make do with less." If that was the underlying premise of human resources for the last 15+ years, the lack luster, post recession employment situation would make more sense. In effect, US business was acknowledging the decreasing number of individuals available for work caused by the upcoming baby boomer retirement wave by increasing productivity and hiring fewer workers.
Posted by Unknown at 1:30:00 PM