There are three underlying trends occurring in the U.S. Economy that are flying below the radar.

1.) The increased savings rate: for the last 10-15 years, the cry of "we don't save enough" has been been heard throughout the economic world. It was argued (and I believe correctly so) that the lack of savings was a sign the U.S. consumer was borrowing too much (see number 2 below) and spending too much, essentially living beyond his means (which he was). However, that has clearly changed, as the U.S savings rate has now increased during the first part of the latest recovery: 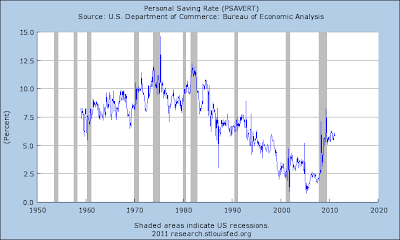 This is an important fundamental change. It will help us to finance the trade deficit and keep interest rates lower by increasing the supply of loanable funds.

2.) The decrease in household leverage. This is tied in with point number one. US households are still heavily indebted. Before the recession started, the household debt/disposable personal income ratio was over 130%. That number has now dropped to 114%. As a result, the financial obligations ration has been dropping sharply: 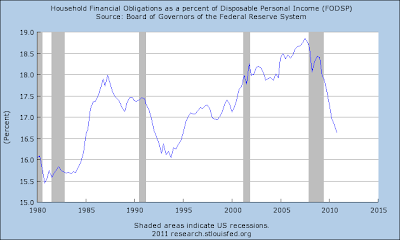 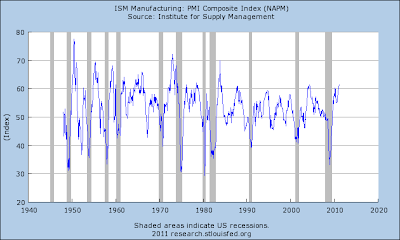 The ISM number is printing some of the strongest readings in over 20 years. Kash over at the Streetlight Blog has written some great articles on this (see links at the bottom of the page on this link).

4.) The rise of US exports: the US is no longer the primary driving force of the the world economy; developing economies (especially the BRIC) players are exerting a strong influence over international economics. The US is selling exported goods into this strength, which is clealry helped by a cheaper dollar. This has led to the rise of U.S. exports as an important part of the economic recovery:

With housing and construction in the dumps and consumer spending pinched by thrift and tight credit, exports have powered nearly half of U.S. economic expansion since the recession ended in mid-2009

(The article goes on to note the U.S economy is now more vulnerable to international economic swings because of this development.)

There are still plenty of problems for us to deal with: a lackluster housing market and a high unemployment rate being at the top of the list. However, not all is bad; there have been some important fundamental changes for the better underneath the headlines.

And an oldie but a goodie -- I dug up this you tube video of me about two years ago talking about savings (I even mention Mish positively -- this was before he went off the reservation and into the great beyond):