Jobs and Jobless Claims: tomorrow all we knew changes

This morning the BLS reported weekly initial jobless claims of 415,000. The 4 week average is 430,000. For now we have answered the question as to whether jobless claims would continue to decline under 400,000, or were simply establishing a new plateau -- it is the latter. The new plateau is a range between 410,000 at the low end and 450,000 at the high end. I would want to see at least 2 weekly reports under 395,000 before considering that a change from this new range is taking place.

All of which is prologue to the point that we can probably toss a large part of what we thought we knew about job creation in the last 2 years into a cocked hat tomorrow, when the BLS announces its yearly revisions that match actual payroll reporting from tax payments to the data. Officially this will only correct the results from March 2009 to March 2010, but the BLS will re-estimate all of the numbers since then as well. While we know that we will find out that 2009 was even worse than reported so far (by about 330,000), the real puzzle is what will happen to 2010's monthly payroll reports. Since the BLS tends to underestimate jobs in the first year of a recovery, it is just as likely that they will be revised higher as lower.

Until then, one last time with current data, here is a graph of initial jobless claims (through last week) plotted against payrolls: 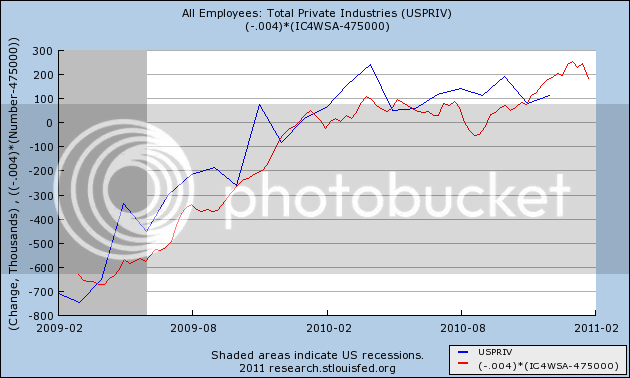