U.S. Is the World's Largest Manufacturer

Yet America remains by far the No. 1 manufacturing country. It out-produces No. 2 China by more than 40 percent. U.S. manufacturers cranked out nearly $1.7 trillion in goods in 2009, according to the United Nations.

The story of American factories essentially boils down to this: They've managed to make more goods with fewer workers.

The United States has lost nearly 8 million factory jobs since manufacturing employment peaked at 19.6 million in mid-1979. U.S. manufacturers have placed near the top of world rankings in productivity gains over the past three decades.

That higher productivity has meant a leaner manufacturing force that's capitalized on efficiency.

"You can add more capability, but it doesn't mean you necessarily have to hire hundreds of people," says James Vitak, a spokesman for specialty chemical maker Ashland Inc.

This is a very important point to make. The internet is full of chatter about how the U.S. is always falling behind in manufacturing. Yet, we're still the world's largest manufacturer. As we've pointed out here on several occasions, the issue is productivity: the U.S. manufacturing is in fact incredibly efficient.

Here's the chart from the article: 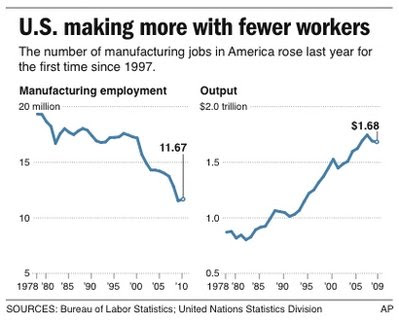