Lost in usual chatter about the monthly decline in private nonresidential construction spending reported for December yesterday, was the fact that it may have already bottomed last July. Indeed, back in September I asked Is Nonresidential construction stabilizing? and concluded that "it looks like it is time to watch for a bottom," reasoning from an improving AIA architectural billings diffusion index that

This makes me think that the AIA index may be similar to the ISM manufacturing index. Both are diffusion indexes, with 50 being the dividing point between most businesses reporting an increase vs. a decrease. But the ISM says that its index signals expansion before the index reaches 50. Several months' readings at 46 (the actual number may even be lower, I didn't go back and check), are sufficient to signal expansion. The 2002-03 readings of the AIA index suggest the same may be the case.

The AIA architecture billings index has only improved since then. It now shows absolute improvement rather than subsiding declines, a trend that has picked up steam in the last couple of months: 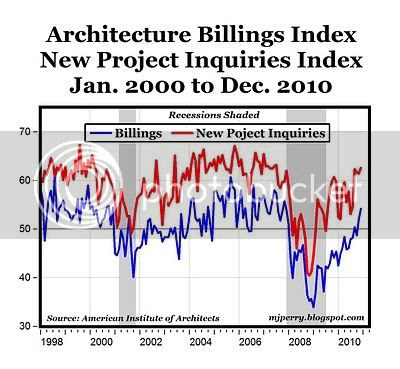 In September I also cited in support of the analysis, that Commercial and Industrial loans from banks looked like they were bottoming. This too has been confirmed by more recent data: 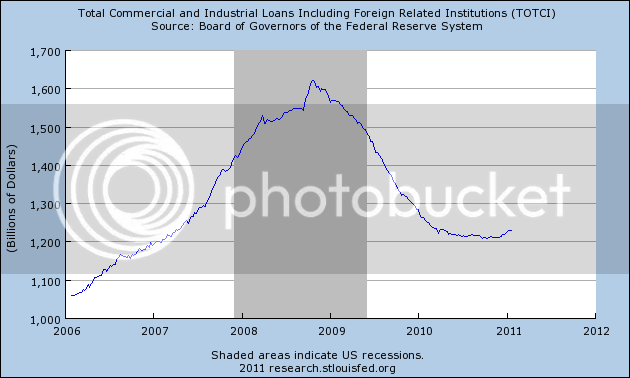 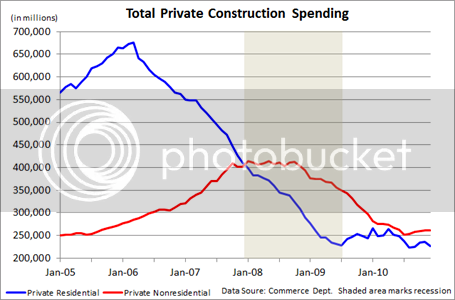 Notice that for the last six months, nonresidential spending has essentially been flat - and the lowest reading was actually in July. In any event, what is clear is that its 2 year decline from mid-2008 has been broken.

One of the reasons for more optimism about how the economy will perform in 2011 is that it will no longer be fighting against a decline in both residential and nonresidential spending. In fact both may begin to show at least some increase. Which also means at least a few construction jobs - finally - being added to payrolls as well.
Posted by New Deal democrat at 8:30:00 AM