Prices dropped right after the open (a), bit a momentum bottom (b) and then started to grind higher (c). Notice the the accompanying momentum indicator was barely moving higher; hence, the word grinding.

After moving through key resistance prices have printed two weaker candles (a). However, the A/D and CMF (c and d) still indicate we're seeing a net inflow into the market and the MACD (e) indicates momentum is positive. However, given the last two days of price action, I would not be surprised to see prices move lower to the 10 or 20 day EMA to blow off some steam before resuming higher.

On the IEF, notice the gap down a little over a week ago (a), followed by a consolidation (b), followed by another gap lower (c). Prices then moved lower still and gapped lower at today's open. There is a pretty big exodus out of the market right now.

Notice that prices are moving lower still, although they have printed a hanging man (a). We're still seeing a net outflow of cash (b and c) and declining momentum (d).

So -- we have a rising stock market and declining bond market. This is usually the beginning of the second part of the market moves in a bull market. In the first, both Treasuries and stocks rally. Treasuries rally because there is still concern about the economy and little fear of an increase in rates, while equities rally in anticipation of recovery. In the second part of the rally, Treasuries start to sell off as the safe money starts to move into the riskier parts of the market.

The dollar has rebounded from its recent drop, but has hit resistance at Fibonacci levels (a). 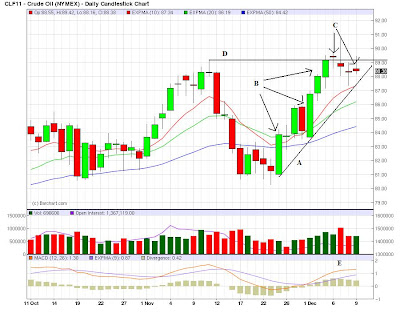 Oil may be entering a new phase. First, it has broken through the lower 80's resistance it was hitting for a few months. In addition, it is in a good short rally right now (A). Prices have printed some very strong price bars (B) and are currently hitting resistance at previous levels (D). Notice that over the last four days the price action has been extremely narrow (C). There has not been a sell-off, where traders take profits after a short rally. Considering the strength and quickness of the last rally, that is interesting. In addition, momentum has room to run (E). In short -- prices are lining up for a move higher, which could be a problem for the economy.
Posted by Unknown at 4:44:00 PM