Last springtime, the LEI's really slowed down and were essentially flat in midyear. The summer slowdown hit job growth, and industrial production in particular has gone sideways in response in the last couple of months.

Now the signs are that the economy is set to accelerate after New Year's. As this graph from Briefing.com shows, the LEIs increased to +0.5 in both September and October.

The advance read on the November LEI's from the same service is a whopping +1.2. In addition to the financial component, which has been relentlessly positive for almost two years, Initial Jobless Claims had a big downdraft in November, and supplier deliveries as measured in the ISM manufacturing report increased sharply. Consumer expectations about the future also increased. Meanwhile new capital orders decreased, but were cancelled out by new orders for consumer nondurables. The manufacturing workweek went sideways. Only housing permits remain unknown, and it is not expected that they will change too significantly.

Three months in a row of good numbers strongly suggests the economy will re-accelerate beginning in about January.

Meanwhile the Conference Board also updated their Employment Trends Index, their leading indicator specifically for jobs. Here is the latest information: 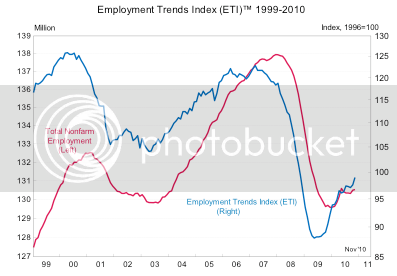 This suggests that job growth will also re-accelerate in the beginning of the new year.

I realize that in an absolute sense the economy is in terrible shape, and this is a long, slow, painful slog -- much moreso than it ought to or has to be. But we are making progress.
Posted by New Deal democrat at 11:30:00 AM