Why the Job Gains Now? Or, The Death of the Pavlov's Economic Dog

First, let's look at the last year of job gains: 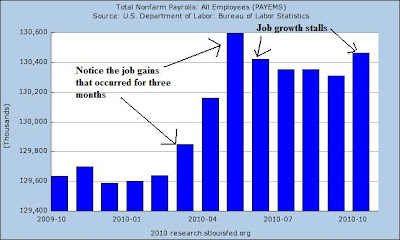 Notice the three months at the beginning of the year -- March, April and May -- when we saw some nice gains in the jobs market. Then everything just stopped. Why?

Remember, this was when the Greek crisis hit the market and fear gripped most decision makers. In response to that, NDD wrote and article titled How Pavlov's dogs explain the sputtering Recovery where he noted:

By April of this year, virtually every economic indicator pointed to recovery: not only had GDP regained nearly 3/4's of its 2008-09 loss, but industrial production, manufacturing, and consumer purchasing were on a roll. Beyond that, early indicators by way of temporary hiring had given way to strong hiring in the general economy. Even real income had picked up slightly. On Monday an article at CNBC's website confirmed my writing last week that:

Despite all the gloom and doom about the US economy, the private sector actually created 620,000 jobs over the past seven months, far faster than in the previous two recessions. generating between 200,000 and 300,000 new jobs (excluding census workers) each month.

Then, suddenly, it seemed like the bottom fell out. GDP in the second quarter is likely to ultimately be tallied well under 2%. Industrial production in June barely budged. Manufacturing cooled off. Retail sales fell over 1% in May and another 0.3% in June. Even worse, non-census hiring came to a screeching halt: about +20,000 in May, -21,000 in June, and again +12,000 in July. Talk of a "double-dip" second downturn, which had all but disappeared into the shadows in April, returned with a vengeance by July, with prominent bears like David Rosenburg proclaiming that there was better than a 50/50 chance that a second leg down was to ensue. Permabears like Mish crowed.

It wasn't as if some Doom Fairy had come along and waved her black magic wand over the economy -- there were real reasons for the downturn in some of the statistics. Oil briefly at almost $90 equated to 4% of the GDP, historically the tipping point between expansion and oil shock induced recession. The explosion and sinking of BP's well in the Gulf of Mexico was an economic disaster for the Gulf of Mexico secondarily to an environmental catastrophe. The expiration of the ill-conceived $8000 housing credit caused demand to crater, subtracting about 100,000 housing starts a month, and leading to more construction and real estate industry layoffs. The failure of Congress to pass adequate and timely relief for state and local budgets meant that nearly 100,000 layoffs that would have happened last year, and could have been averted again this year, in fact took place in June and July.

But the abrupt halt in private sector hiring and cliff-diving decline in consumer spending in May defy explanation based just on the above list. A whole host of indicators all pointed to more robust job growth -- ISM manufacturing, temporary help hiring, durable goods orders, real retail sales, and for good measure the Conference Board's (which publishes the LEI) Employment Trends Index.

Instead, something happened in late April and early May to make employers and consumers alike suddenly freeze in their tracks. That something was fear.

However, what I think is happening is the fear factor from the Greek event is going away. Consider these charts: 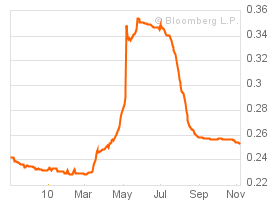 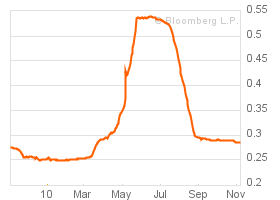 Both one month (the top chart) and three month (the bottom chart) libor spiked in reaction to the crisis, but have since dropped. In addition, we've seen equity markets rally to strong levels, and money flow into the junk bond and investment grade corporate market.

In short, maybe the fear is over, leading companies to start hiring again.
Posted by Unknown at 9:28:00 AM