First, let's go back to the charts that started this analysis. 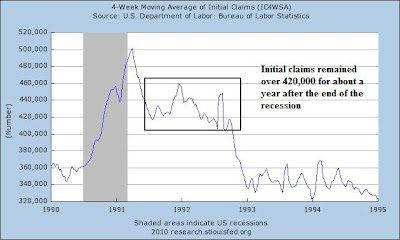 Initial unemployment claims remained high for over a year after the end of the 1990s recession. In addition, 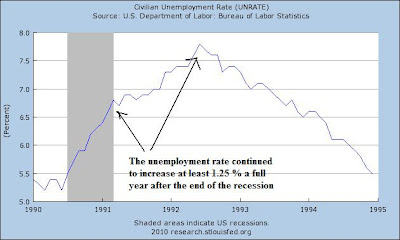 The unemployment rate continued to increase after the end of the early 90s recession. Let's look a little deeper into the employment statistics to see what jobs were lost.

Above is a chart of total non-farm employees for the years 1989-1994. Notice a few points.

1.) From an employment perspective, the recession was mild -- the economy only lost 1.621 million jobs.

Let's divide the economy into manufacturing and service sectors.

Remember that total manufacturing employment decreased by 1.3 million over the recession at maximum employment losses. Total employment of durable goods manufacturing contracted over 1 million, meaning it bore the brunt of the losses.

Non-durable manufacturing lost the obvious remainder of jobs. with losses totaling a little over 150,000. 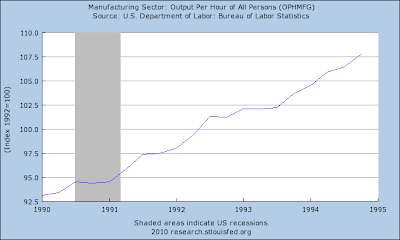 Above is a chart of service sector employment for the duration of the 90s expansion. Notice this is where a bulk of the job creation occurred. However, the recession ended in 3/91, year employment did not ramp up until the end of 92, over a year after the end of the recession.

S0, the first jobless recovery was primarily caused by a massive contraction in durable goods manufacturing. These jobs did not come back until nearly the end of the expansion -- over 8 years after the end of the previous recession.
Posted by Unknown at 9:30:00 AM