Nonfarm private employment increased 55,000 from April to May 2010 on a seasonally adjusted basis, according to the ADP National Employment Report®. The estimated change in employment from March to April 2010 was revised, from an increase of 32,000 to an increase of 65,000.

May’s rise in private employment was the fourth consecutive monthly gain. However, over these four months the increases have averaged a modest 39,000. The slow pace of improvement from February through May is consistent with the pause in the decline of initial unemployment claims that occurred during the winter months. 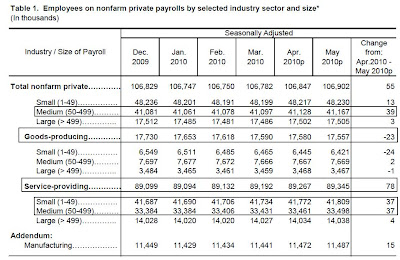 All of the gains came from the service sector, which added 78,000. Also notice that small and medium businesses added the preponderance of the jobs.

While the overall total is disappointing, the increase in jobs in the small and medium businesses is encouraging.
Posted by Unknown at 9:30:00 AM